Between double cleansing, solid cleansers and washing your face with sparkling water (apparently it’s a thing in Japan and Korea) it's easy to get confused about how, in fact, you should be washing your face. 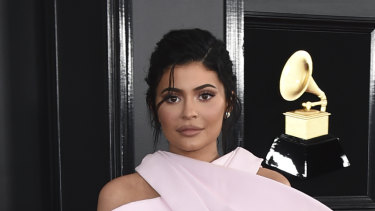 Kylie Jenner as recently accused of not washing her face properly by the internet. Credit:AP

The good news is, with so many new cleansers available you can opt to keep it simple with

something like Lanolips’ new Face Base cleanser for a gentle cleanse that won't strip your skin, choose the lazy route by swiping off the day with the Equal Beauty Cleansing Cloth or opt in to the totally luxurous life and create a new ritual/a moment to yourself with La Prairie’s Supreme Balm Cleanser . It starts as a balm and transforms into an oil when you massage it into the skin, a splash of water then makes it into a milky cleanser. It's probably the closest I'll get to meditation right now and I will lock the bathroom door and take it.

But when you consider the fierce backlash Kylie Jenner attracted (yes, really) for allegedly not washing her face properly when videoing herself using her new Kylie Skin Foaming Face Wash, you have to wonder if we are all, in fact, guilty of the same.

For one thing, as Michelle Doherty, director of Alpha-H skincare puts it, there are a lot of myths out there around cleansing.

These include, that your skin should feel 'squeaky clean' after cleansing.

"Basically that is the feeling of your skin having been completely stripped of its protective barrier. Many cheap cleansers produce this feeling due to their foaming ingredients, and while some people like this feeling, in reality it’s a complete disaster for your skin."

And also that, as Gwyneth Paltrow is said to do, you can just water to wash your face in the morning.

"Not only does your morning cleanse remove the bacteria that builds up on your skin
overnight, but it also allows for better application and absorption of your other AM products," says Doherty.

Other no-no's overcleansing (more than twice a day is unnecessary unless you're exercising or excessively sweaty) as is using water which is too hot.

The most common cleansing mistake Doherty sees is people choosing the wrong cleanser for their skintype.

"It is so important to understand what your skin needs and use a cleanser that suits.
The single biggest error people can make when washing their face is to use a cleanser that
completely strips the skin’s natural protective barrier, leaving it exposed to skin-attacking
aggressors," she says.

Founder of The Dermal Diary, Isabella Loneragan tells me that no, I can't get away with not washing my face at night. She likens doing so as being akin to painting your windscreen with superglue and then expecting it to be clean after driving around all day.

Loneragan also cautions against cleansers which contain sodium lauryl sulphate (SLS) which is a foaming agent that strips oil from the skin.

"They are the main ingredients in washing up liquid – as you can imagine – the washing
up is a place you want oil stripped from, but not from your face. It impairs the skin’s barrier function rendering it unable to protect us from bacterial assault and also results in transepidermal water loss and increased hydration in the skin."

Loneragan, who says its worth spending money on a cleanser but not too much, is also a big fan of double cleansing. First to wash off your makeup and then to wash your skin.

"The second cleanse really treats and conditions the skin," she says, adding that you're better off doing it out of the shower, if you can be bothered.

"Double cleansing allows cleansers to work into your pores to deeply detoxify and remove dirt, bacteria and pollution that can be easily missed by a quick, single cleanse. Second only to UV damage, pollution is the biggest aggressor when it comes to ageing your skin … Try something like a cleansing oil or butter and follow it up with a gentle cleanser or mask to cleanse and better prep the skin for the next steps in your routine."

Tracey Beeby, global education ambassador for Ultraceuticals is also firmly in the cleansing is important camp.

"A very good skin care routine begins with cleansing and too often consumers brush over it and use just anything from stripping wipes to soap based harsh surfactants to cleanse their faces. The fact is, this is the first, crucial phase of any skin care routine and care needs to be taken to ensure it is gentle yet thorough in preparation for active serums and moisturisers to penetrate into the skin," she says.

So there we have it. Wash your face, not too often, use the right products.

WHAT TO BUY THIS THURSDAY

Your weekly recommendation for a late-night shopping trip …

When it comes to makeup I am reasonably low maintenance. Except I am a complete sucker for a bold red lip. Which, frankly, is about the opposite of low-key. Red lipstick is so much work. But it's almost always worth it. It's armour! In case, along with my favourites from Chanel (Coco Chanel was a woman who also believed in red lipstick's power), I'm adding in Giorgio Armani's Lip Maestro. Mainly, because other than it being really long lasting and non-drying, it's slightly less maintenance because it's more of a velvety lip lacquer than a lipstick. It has a matte finish though, so it's not too shiny. This means you can freehand dab it on if you fancy rather than use the wand, and you don't need a lip liner. Plus, it's just so darn glam. $56. giorgioarmanibeauty.com.au

Skin Deep, our weekly beauty column, is not sponsored. All product recommendations are genuine endorsements.