“When I help a guy get in shape for a part, we always focus primarily on building his upper body,” says Bruno. Why hone your chest, arms, shoulders, and back? “Just look at Superman—a big upper body is what gets you noticed, and shows you’re in shape,” says Bruno.

The problem is most men approach training their upper half all wrong. From selecting poor exercises, not working hard enough, or totally overlooking their lower body, the consequences range from imbalances and injury, to wasted time and effort. The one thing you rarely see: the results you want.

Bruno’s sick of it. That’s why he’s a greed to reveal his go-to program for building more muscle up top. The Ultimate Upper Body workout plan is the same program he’s used to turn even the lankiest, softest guys into big-screen Greek Gods.

If you choose to tackle the program, you’ll likely be surprised at how hard you train each session. By hammering your upper body with Bruno’s hand-selected moves, you’ll shock your muscles into adapting quickly and pack on new muscle while also shedding fat.

But you won’t just be working harder, you’ll also be working smarter. The “magic” is in the exercises and how they’re woven together across weeks and months, says Bruno. The Ultimate Upper Body program rests on a handful of cutting-edge, muscle-building philosophies that haven’t failed Bruno yet. Here are just a few.

Keep Your Eye on the Goal

“Even if your goal is to build a big upper body,” says Bruno, “you also need to work your lower body.” There are two reasons for that. “First off, no one wants chicken legs,” says Bruno. “Second, lower-body exercises tend to be more metabolically taxing, helping keep you lean throughout the program.”

But there’s a catch, says Bruno: “I only choose lower-body moves that direct back to your ultimate goal: building a big upper body.”

Consequently, you won’t find the typical lower-body “muscle-building staples”—like the barbell back squat, for instance—in Bruno’s Ultimate Upper Body plan. “Exercises like that are good, but they don’t offer as many benefits to your upper body,” he says.

Instead, Bruno’s program focuses on unconventional squat and deadlift variations that hammer your arms, back, shoulders, and core just as much as your legs.

The lower-body movements he chooses are so effective that you’ll only need to do one each workout. Want to find out just how effective? Try heavy trap bar deadlifts. 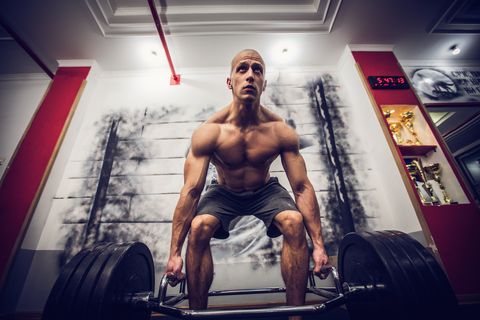 Here’s how to do it: Load a trap bar with a weight you can lift only eight times and stand inside it, your feet shoulder-width. Bend at your hips and knees and grab the handles. Brace your core and keep your lower back straight as you pull your torso up and thrust your hips forward, standing up with the bar. Pause. Lower the bar to the floor and repeat. Do eight reps. That’s one set. Do four total. To hit your upper body even harder, pause for three to five seconds at the top of each rep. (If yourgym doesn’t have a trap bar, you can get a similar effect from heavy goblet squats.)

While the deadlift is categorized as a lower-body exercise, holding a massive load at your sides—as you do during the trap bar variation—will light up your grip, arms, shoulders, and back. Your upper body will be challenged almost as much as your lower body.

Bench Press Mondays have a near-sacramental quality among lifters. And while the bench press has some serious benefits, you may be surprised to hear that overusing it could be why your upper body isn’t as pronounced as you’d like.

Too much bench pressing tightens your chest muscles. Those tight muscles “pull” your shoulders forward into a slumped position, which can make you resemble Quasimodo. “It sounds counterintuitive, but for many guys the quickest way to immediately look like you have a bigger upper body is to improve your posture,” says Bruno. 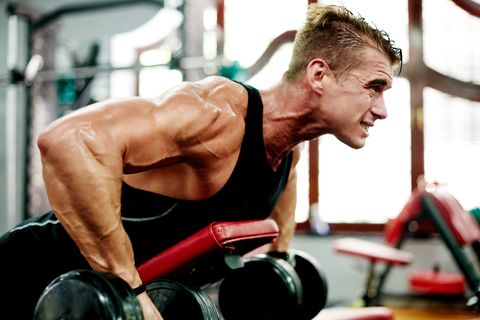 The way to do that: Balance your strength. By performing the handful of critical rowing exercises included in The Ultimate Upper Body program, says Bruno, you’ll work the muscles opposite your chest. This counteracts all the pressing, and, in turn, pulls your shoulder blades back, so you stand tall and look strong.

Analyze the exercises in all the workouts you do across a week. For every two “pushing ” exercises, such as bench presses or pushups, you should do three “pulling ” exercises, like chest-supported dumbbell rows, pullups, or barbell rows.

Think of a movie star as a multimillion-dollar asset. Bruno does. Like athletes, they need to train hard to hit their goals—without hurting themselves. If an actor injures himself in the gym, it derails his primary purpose. At best, an entire movie production is put on hold for a few days, costing studios hundreds of thousands of dollars. At worst, the actor is sidelined for so long that he’s never able to get ripped, and the studio must find a plan B.

You should treat your body like a multimillion-dollar asset, too, says Bruno. You only have one body, he says. “And avoiding injuries allows you to consistently train hard, and that’s the real secret to progress.”

The best exercises, says Bruno, are low risk, high reward. That means that they deliver all the muscle-building benefits of more technical exercises, but don’t put you at risk. Favorite upper- and lower-body moves of Bruno’s, for example, are the low-incline dumbbell bench press and Bulgarian split squat, respectively. The former delivers the benefits of the barbell bench press with less risk of shoulder problems, while the latter works your lower half just as hard as a barbell back squat, but is less likely to hurt your back, knees, or hips.

The Ultimate Upper Body plan is filled with moves just like those, which means your lingering injuries won’t hold you back from tackling these workouts head on.