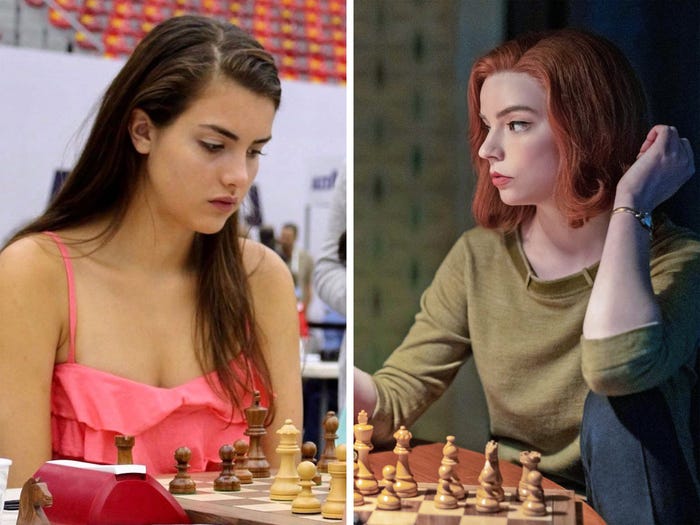 Netflix's "The Queen's Gambit" is the most accurate portrayal of chess in Hollywood, but it doesn't go far enough to depict the sexism ingrained in the culture of the sport, female chess influencer Alexandra Botez told Insider.

Botez is a Twitch chess streamer who started training with her dad when she was just 6 years old. By the time she was 8, Botez won her first national championship.

She said she went on to win six more championship titles by the time she graduated from high school. She holds the International Chess Federation title of Women's FIDE Master.

"It's wild what it's been doing to chess in terms of your average person knowing about it," Botez said of the Netflix series, which follows fictional chess prodigy Beth Harmon as she grows up in the 1960s. "I never imagined anything like this because chess was always super niche."

Botez says if the show was historically accurate, Beth wouldn't have been able to compete in any world championship events

One thing "The Queen's Gambit" got right is how all-consuming chess can feel, Botez said.

While she was growing up, Botez was so focused on chess that she said it felt like she was living in an alternate universe built for the game.

"Beth is totally engulfed in the chess world, it seems like nothing else exists except for these games, training, the community, and chess," Botez said of the character. "The way that is portrayed is extremely accurate."

And while the character deals with sexism in the male-dominated game, Botez said it doesn't come close to the reality of misogyny in the chess world, especially for the time period the show is set in.

"If the show had been historically accurate, Beth wouldn't have even been able to compete in any world championship events," Botez told Insider, citing the first female Grandmaster Susan Polgar, who qualified for the Chess World Championship in 1986 and was denied the chance to compete because of her gender, according to her biography.

"She qualified for the Candidates, which is a tournament where, if you win, then you're competing for the world championships," Botez told Insider. "That means you are at least the second-best player in the world, and she qualified by her rating."

Aside from competing, the show's portrayal of men's behavior towards women in chess also misses the mark, according to Botez.

"The way that they were super supportive of her when she won is inaccurate," Botez told Insider. "If you read the real stories from females playing back then, people wouldn't even shake their hands or look at them."

In a recent interview with St. Louis Post-Dispatch, Polgar recalls a male player swiping all the pieces off the board in frustration after losing to her.

"I had to face sexual harassment, physical intimidation, and, regularly, verbal and mental abuse," Polgar told St. Louis Post-Dispatch of her experience competing in the 1970s and '80s.

Botez said she experienced sexism in chess communities growing up.

"Sometimes it's the people who are your closest friends that think females are genetically worse at chess," she told Insider.

Botez said she's often heard comments like, "you're playing the girl, it's an easy win."

In a recent interview with Insider, Magnus Carlsen, the world's top-ranked chess player, said that he still sees sexism in the world of chess.

"In general, chess societies have not been very kind to women and girls over the years," he said. "Certainly there needs to be a bit of a change of culture."

Both Botez and Carlsen said that misogyny in chess is more common in older players than kids. Botez added that most girls she knew who played chess in grade school stopped playing by the time they were in high school.

"There isn't so much difference between boys and girls. Clearly, the difference is later on," Carlsen said.

When she experiences sexism in chess, Botez says all she can do is focus on the game and play her best.

"It gets in the back of your head when you've heard it for so long, and it messes with your sense of confidence," she said. "Maybe you start doubting yourself a little bit more, but you just try to keep fighting those thoughts."

"The Queen's Gambit" is currently streaming on Netflix.