Alec Baldwin has resurfaced in a quaint town in Vermont just days after the on-set “Rust” shooting, leaving local business owners in shock.

Chris Stannard, the owner of The Italian Market of Manchester told Fox News in an interview on Thursday that Baldwin, 63, was, in fact, on foot in Manchester Center, Vermont on Monday picking up a food order from Cristos Pizza and Pasta, just a few businesses away from his.

“Monday afternoon he was there,” Stannard confirmed to us. “I was taking out my trash outside and my acquaintance that works there said, ‘You won’t believe who was just in here!’ He told me and my jaw dropped.” 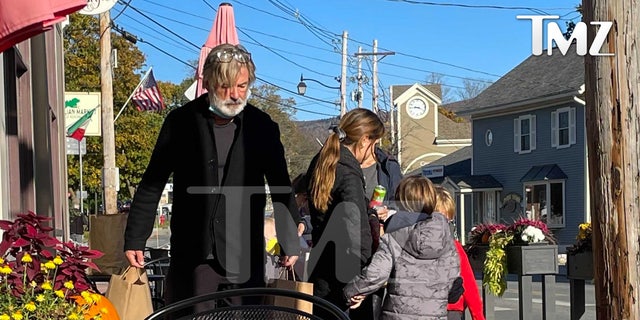 Alec Baldwin and his family were spotted in Vermont days after the accidental shooting of Halyna Hutchins on the set of Baldwin’s film ‘Rust.’
(TMZ)

“I know those poor folks over there at the pizza place are getting more bombarded than I am,” Stannard added.

The business owner added that it’s a “little crazy” that Baldwin ended up in the small, family friendly vacation town to hunker down in the aftermath of the shooting, given that it’s not exactly a spot too many high-profile figures pass through often.

“There’s a couple [celebrities] who have come through town before but this is pretty newsworthy for our little town,” Stannard said.

It’s unclear if Baldwin was chatty with the pizza shop owners when picking up his food on Monday. However, he was “dressed in black and by himself” when retrieving his order, Stannard learned.

The Italian Market of Manchester owner added that the town is known as a vacation destination, with ski mountains nearby. It’s also a great area for hiking, he said.

“It is beautiful, quaint quintessential New England,” he added.

Meanwhile, Baldwin’s role as a producer in the Western “Rust” has become a subject of growing scrutiny.

On Oct. 21, the star pulled the trigger on a prop gun while filming in New Mexico and unwittingly killed cinematographer Halyna Hutchins and injured Joel Souza. While it’s likely Baldwin the actor won’t be held criminally or civilly liable for the tragedy, Baldwin the producer might be, along with several others in leadership positions.

Carew Papritz, a former Hollywood filmmaker and an award-winning author, told Fox News “it depends on your key players” when it comes to the 63-year-old’s involvement in the hiring process for the movie.

“I would guess that the production designer, maybe your camera operators, some of your line people, you’ll secure,” Papritz explained. “You’ll probably secure your production manager. And if they’ve been in the industry long enough, they’ll bring in their crews. So when you hire your key people, that’s important. So my guess is he would be responsible for knowing the experience of those positions. But knowing that it was a low-budget project, he was probably a much more hands-off producer.”

It’s known that Baldwin and Souza, 48, worked together on the 2019 police drama “Crown Vic.” And with a budget of a reported $6 million to $7 million, “Rust” was likely a passion project for Baldwin.

Santa Fe-based District Attorney Mary Carmack-Altwies said in a press conference on Wednesday that the investigation remains in the preliminary phase and her office was far from making any decisions about whether any charges would be filed. She added that those involved in the production were cooperating with law enforcement. 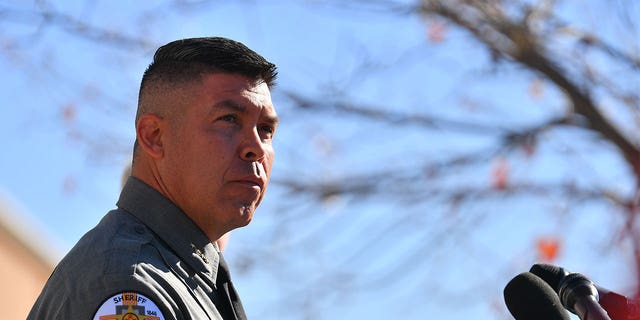 Santa Fe County Sheriff Adan Mendoza speaks during a press conference at the Santa Fe County Public Safety Building to update members of the media on the shooting accident on the set of the movie "Rust" in Santa Fe, New Mexico.
(Sam Wasson)

Court records indicate that assistant director Dave Halls grabbed a firearm off a cart and handed it to Baldwin, indicating incorrectly that the weapon didn’t carry live rounds by yelling “cold gun.”

There’s also confusion amongst authorities about a statement they received from armorer Hannah Gutierrez Reed. Santa Fe County Sheriff Adan Mendoza said that he does not believe a statement from the armorer in the “Rust” movie investigation was accurate regarding the presence of live rounds on the set.

“No, obviously it isn’t,” he said. “That was a live round that struck and killed Mrs. Hutchisn, so that is not an accurate statement as far as I’m concerned.”

Cinematographer Halyna Hutchins was killed on the New Mexico set of "Rust" when a projectile was accidentally fired from a gun.
(AP/Getty Images)

Mendoza said during a press conference Wednesday that, in addition to the bullet taken from Souza’s shoulder, investigators found 500 rounds of ammunition, including a mix of blanks, dummy rounds and what appeared to be live rounds.

The armorer said in the affidavit that she checked the weapon that Baldwin eventually fired prior to the crew breaking for lunch to ensure it was only filled with dummy rounds. When the crew broke for lunch, she personally locked the gun and others in a safe in a nearby prop truck. However, at that time she claims ammo was left out on a cart on the set and not secure. Ammo was also inside the prop truck at the time.

After lunch, crew member Sarah Zachary pulled the firearms out of the safe inside the truck and handed them to her. She advised there are only a few people that have access and the combination to the safe. During the course of filming, Hannah says she handed the gun to Baldwin a few times and also handed it to Halls.

Elsewhere in the interview with “Today,” Mendoza noted that the current focus of the investigation is on the people who handled the gun prior to Hutchins’ death. In addition, he says detectives are taking a very close look at how live ammunition made its way to set at all as well as who was responsible for bringing it.