Dancing Dan Walker’s moonlighting could bag him £100,000-a-year in addition to his new pay packet at Channel 5 after waltzing away from the BBC, writes ALISON BOSHOFF

Twinkle-toed newsreader Dan Walker is known as ‘The Bishop’ in newsroom circles at the Beeb because of his strong faith — he won’t work on the Sabbath.

And as he leaves the Corporation for pastures new at Channel 5, it can be revealed that the other remarkable feature about him is his interest in ‘moonlighting’ — adding to his BBC riches with lucrative corporate gigs.

My mole says: ‘Everyone has noticed how keen Dan Walker is on undertaking these engagements. It’s been a talking point for some time.’ 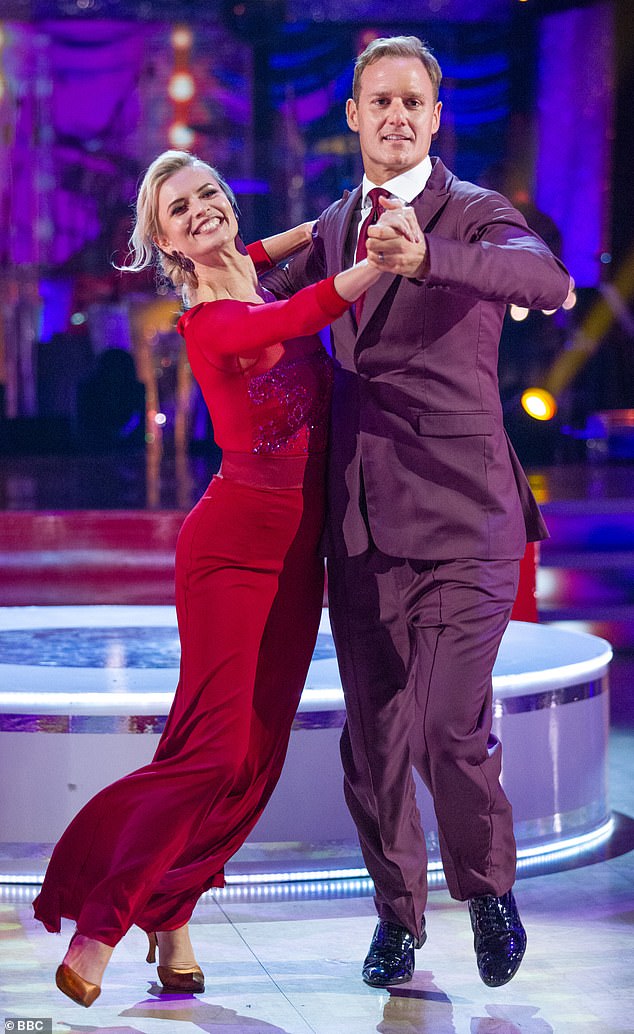 I hear that Walker has already signed up to waltz his way to a lucrative shindig in Birmingham in October, by which time his BBC days will be in the past.

New rules brought in last year by the Beeb mean he’s had to get all of his outside appearances ‘pre-approved’ by his bosses.

Embarrassingly, these extra-curricular activities have had to be declared every six months in the BBC’s ‘register of external interests’.

That shows that since records started in 2020, Walker has undertaken six ‘corporates’ — each worth more than £5,000.

The register has proved deeply unpopular with the Corporation’s news-reading stars — one of whom described it privately to me as a ‘gross invasion of privacy’ and a ‘total farce’.

The focus seems to have led to a ‘brain drain’ of news presenters, with stars defecting from the BBC to the commercial sector including Jon Sopel, Andrew Marr and Emily Maitlis — and now Walker.

All will no doubt be relieved that they no longer have to confess how much they have earned, and from whom. 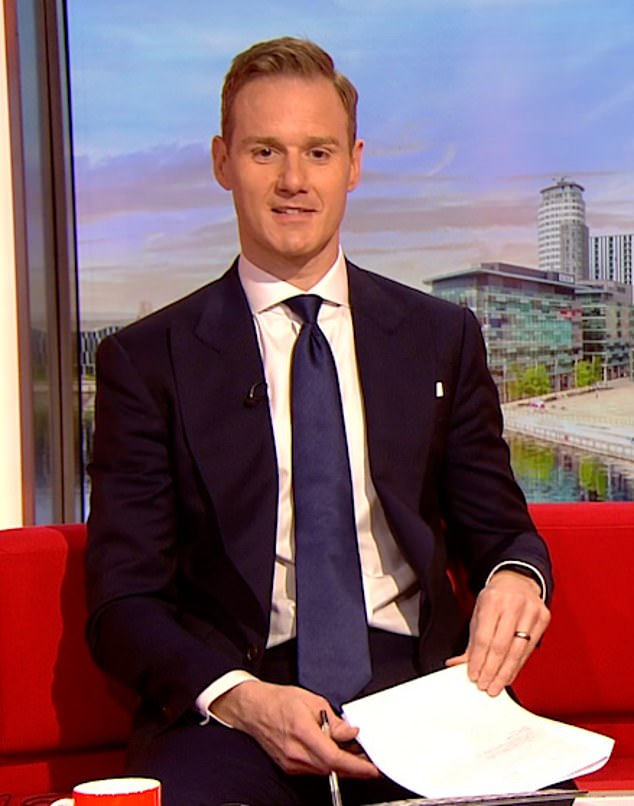 The presenter (pictured), who is married, called the rumours of a romance with Bychkova ‘disappointing’

Walker is thought to be adding at least £50,000 to his £295,000 salary as a result of going to Channel 5; and he can look forward to filling his pockets on the rubber chicken circuit without anybody poking their nose in.

He’s presenting the National Energy Efficiency Awards in Birmingham in October; and last month donned his tux for the 59 Club Service Excellence Awards at the Belfry. He’s a great hit at events.

He was paired with Ukrainian-Slovenian bombshell Nadiya Bychkova, and they reached the quarter-finals.

Bychkova was seen comforting him backstage after he broke down in tears on the tenth anniversary of the suicide of his friend, footballer Gary Speed.

Walker said: ‘I just needed to give somebody a hug. I needed to release emotionally from everything I’d been bottling up in the week.’

Because of Covid, Strictly celebrities and their partners were asked to keep mixing to a minimum and were only allowed to be in close contact with their partners on the show.

The presenter, who is married, called the rumours of a romance with Bychkova ‘disappointing’, adding: ‘I know these happen every year on Strictly and there have been instances in the past of the so-called curse and it’s just telly…but it’s not nice.’

Depp coins it after court fight

The courtroom showdown starting in Virginia next week, in which Johnny Depp is suing his former wife Amber Heard for defamation, will no doubt be sensational.

It comes in the wake of Depp’s disaster at the High Court in London in 2020, when a judge found that he probably did assault Heard multiple times — and that he had not been libelled by a newspaper which dubbed him a ‘wife-beater’.

But, interestingly, the star’s very public disgrace has had little effect on his commercial potency. 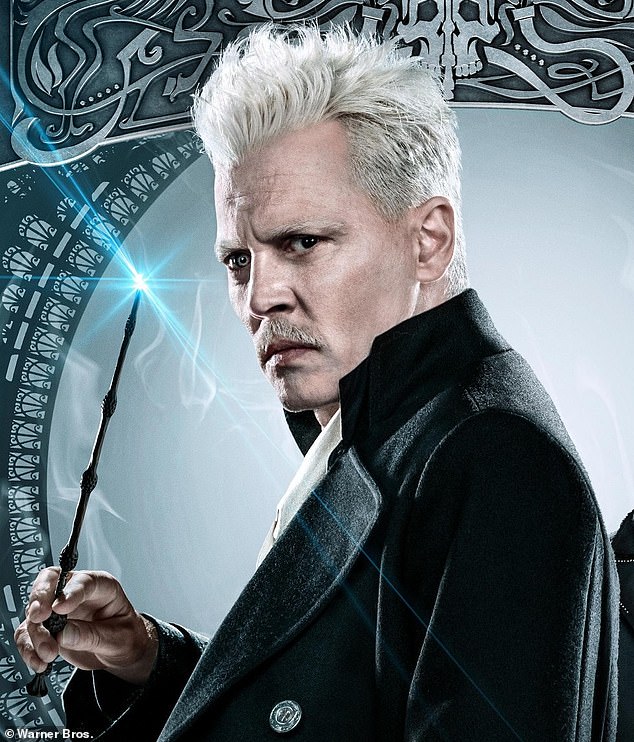 The courtroom showdown starting in Virginia next week, in which Johnny Depp is suing his former wife Amber Heard for defamation, will no doubt be sensational

The fashion house Dior ignored calls to drop him as the face of fragrance Sauvage, and it can be revealed that it was the best-selling fragrance of the year globally.

Maybe Warner Brothers didn’t need to drop him from Fantastic Beasts: The Secrets Of Dumbledore after all. That film is out today, with Mads Mikkelsen taking over Depp’s role as the villainous Gellert Grindelwald, pictured.

Rumours abound of frisky behaviour after hours on the set of the latest Celebrity Bake Off.

I hear that two supposedly attached celebrities were spotted disappearing into one of the bedrooms at the Down Hall Hotel in Hertfordshire, after a night spent boozing and flirting in the hotel bar, following filming.

When the regular series is made there is a ‘family atmosphere’ as the judges, presenters and bakers spend weeks ‘bubbling’ together…but it seems a different kind of chemistry comes into play on the charity edition of the show.

Everyone’s talking about the sensational Netflix film Blonde — but I can reveal that, despite negotiations, it won’t be coming to the Cannes Film Festival next month.

De Armas spent months working on Marilyn’s distinctive, breathy voice, and had to do substantial re-dubs after filming, too. 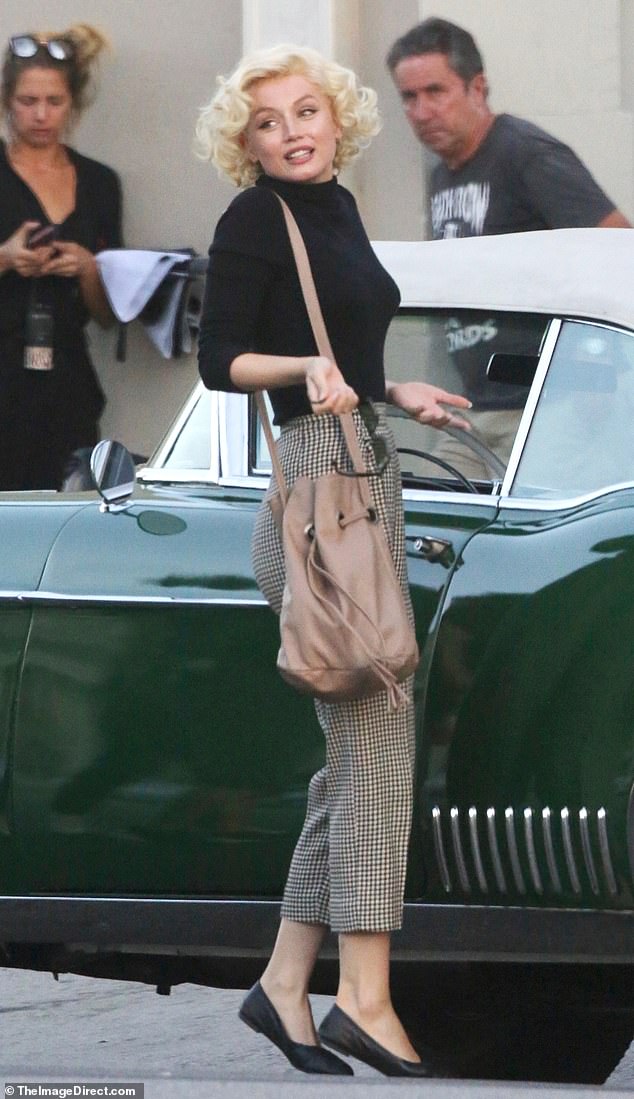 Ana De Armas spent months working on Marilyn’s distinctive, breathy voice, and had to do substantial re-dubs after filming, too

There is a horrifying rape scene involving a fictional version of studio head Darryl F. Zanuck, and reports suggest that there are also frank depictions of menstrual blood which are ruffling feathers.

But film festival bosses are insisting on a long cinema release for all competing titles, and Netflix have not agreed to that.

All good things come to an end, and like many of you, I shall miss Baz Bamigboye, who wrote these pages so brilliantly for so long.

He was a generous colleague and a fantastic friend to me for 25 years — always there for wicked gossip and a proper laugh.

We bonded a long time ago, over a mutual love of Frank Sinatra, during dinner at a restaurant in Los Angeles. It is possible that we both sang so long and so heartily, and drank so much wine, that we were eventually very politely asked to leave.

To quote Frank, I will be going My Way in these pages from now on, but I salute Baz as an original, an icon, and that rarest of beasts: a universally beloved journalist. I can’t hope to fill his loafers, but hope that some of you will come along for my journey, too.

Prince Harry and Meghan have been settled in Santa Barbara since July 2020 but local gossip suggests they are considering renting a second home — an apartment in New York, near the United Nations headquarters.

The couple visited the UN in a rare public appearance in September last year, and met with Deputy Secretary-General Amina J. Mohammed.

They discussed vaccine equity, climate action and mental well-being. Meghan is said to harbour ambitions of a UN role like her friend Amal Clooney, who worked there as counsel to former Secretary-General Kofi Annan.

Could this be the next stop, after satisfying existing contracts with Netflix and Spotify to crank out documentaries and podcasts?

Will Adele ever get back to Vegas? The shop at Caesars Palace is still selling oh-so-expensive merchandise from the ‘postponed’ Weekends With Adele residency, but it’s nearly three months since the singer, pictured, quit — and there is no sign of dates being rescheduled.

Las Vegas journalist Scott Roeben of Casino.org tells me: ‘I can confirm that it’s been absolutely silent over this way, other than a growing sense of her Las Vegas residency not being on her radar at all. There are no further rumblings about a move to another resort.

‘The signage is still up at Caesars Palace, and the merchandise store is still open, but the consensus is that she’s going on her merry way, without much concern for the financial and PR hit which Caesars Entertainment took, not to mention the disappointed fans.’ 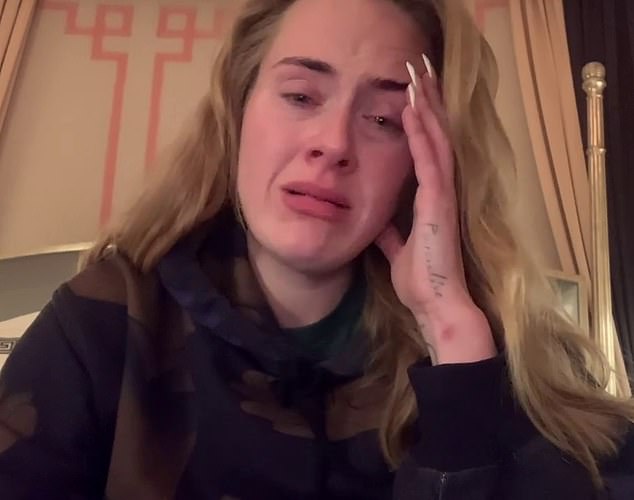 Sienna Miller turns in a powerful performance as the wronged wife of a fictional Westminster MP in Netflix’s new thriller series Anatomy Of A Scandal, which airs from next Friday.

Her character, Sophie, supports her husband, James Whitehouse, in court, where he is accused of rape.

I’m told that between takes Miller, 40, calmly took up her knitting needles and purled and plained away the time. 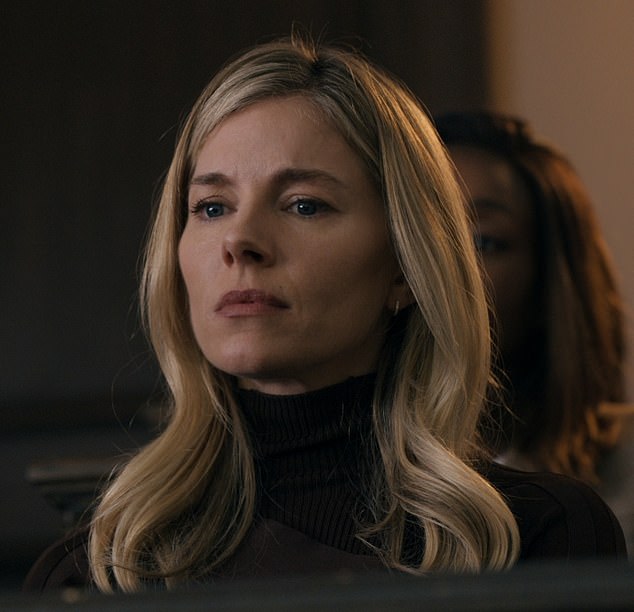 Sienna Miller’s character, Sophie (pictured), supports her husband, James Whitehouse, in court, where he is accused of rape

She’s in good company: Julia Roberts loves to knit, and taught Tom Hanks how to handle a ball of wool. Star Wars creator George Lucas is also a knitter.

Miller, who is dating Burberry model Oli Green, told me she loved working with Rupert Friend, who plays her on-screen husband.

‘Rupert is just brilliant. He’s so natural and makes everything look effortless. There’s no ego whatsoever with him…we ended up having really deep conversations about all sorts of things.’

Morse WILL be back for final series

There were reports that the Inspector Morse prequel Endeavour had run out of puff after eight series.

However, sources indicate there will be at least one more run for the popular ITV show, which stars Shaun Evans as Morse and Roger Allam as his boss Fred Thursday. The new series will start filming next month in Buckinghamshire.

Inspector Morse, starring the late John Thaw, ran from 1987 to 2000 and was named the greatest British drama series of all time by Radio Times readers.

In 2012, ITV aired a two-hour special prequel, Endeavour, with Evans playing a young Morse — and it was such a hit that it has continued ever since. 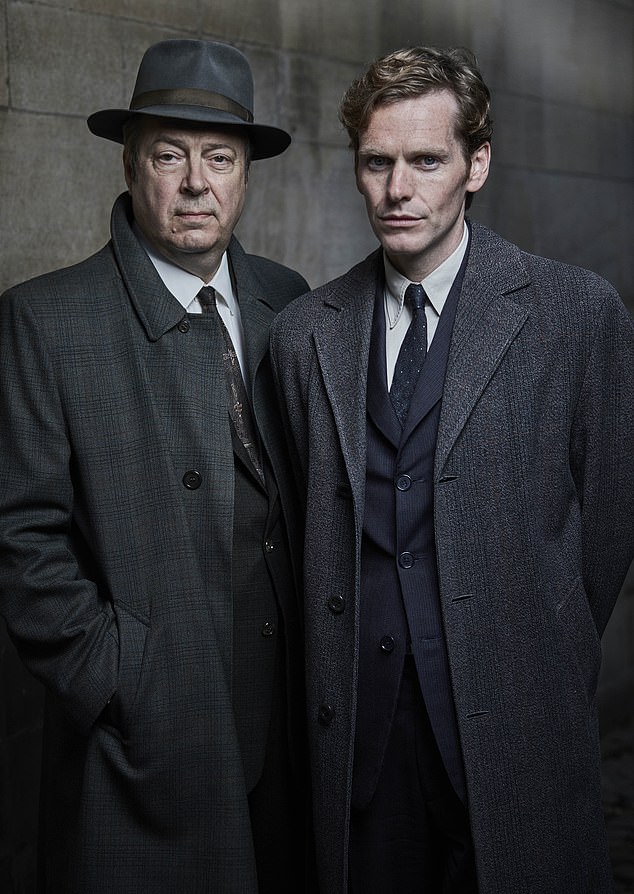 Sources indicate there will be at least one more run for the popular ITV show, which stars Shaun Evans as Morse and Roger Allam as his boss Fred Thursday (both pictured)

At the end of the last series, Terminus, Morse spent the night trapped by a blizzard at an abandoned country house.

In the closing scene, he accepted his boss Fred’s offer to help him to break his struggles with drinking, marking a new chapter in their troubled friendship, and raising the possibility that he might begin to get over his grief at the death of his lover, Violetta.

Looking over the snowy fields, Morse said: ‘Beginning to thaw.’ Thursday replied: ‘Sun always comes up. Just got to hold on for a bit longer sometimes, is all.’

Thaw’s daughter Abigail came on board as journalist Dorothea Frazil in the first Endeavour and is now a key character who enjoys a bond of friendship with the troubled young Morse.

Evans said last year that he knows Endeavour will have to come to an end long before it catches up with the original series.

‘It’s difficult, because it’s like planning your own funeral,’ he admitted.