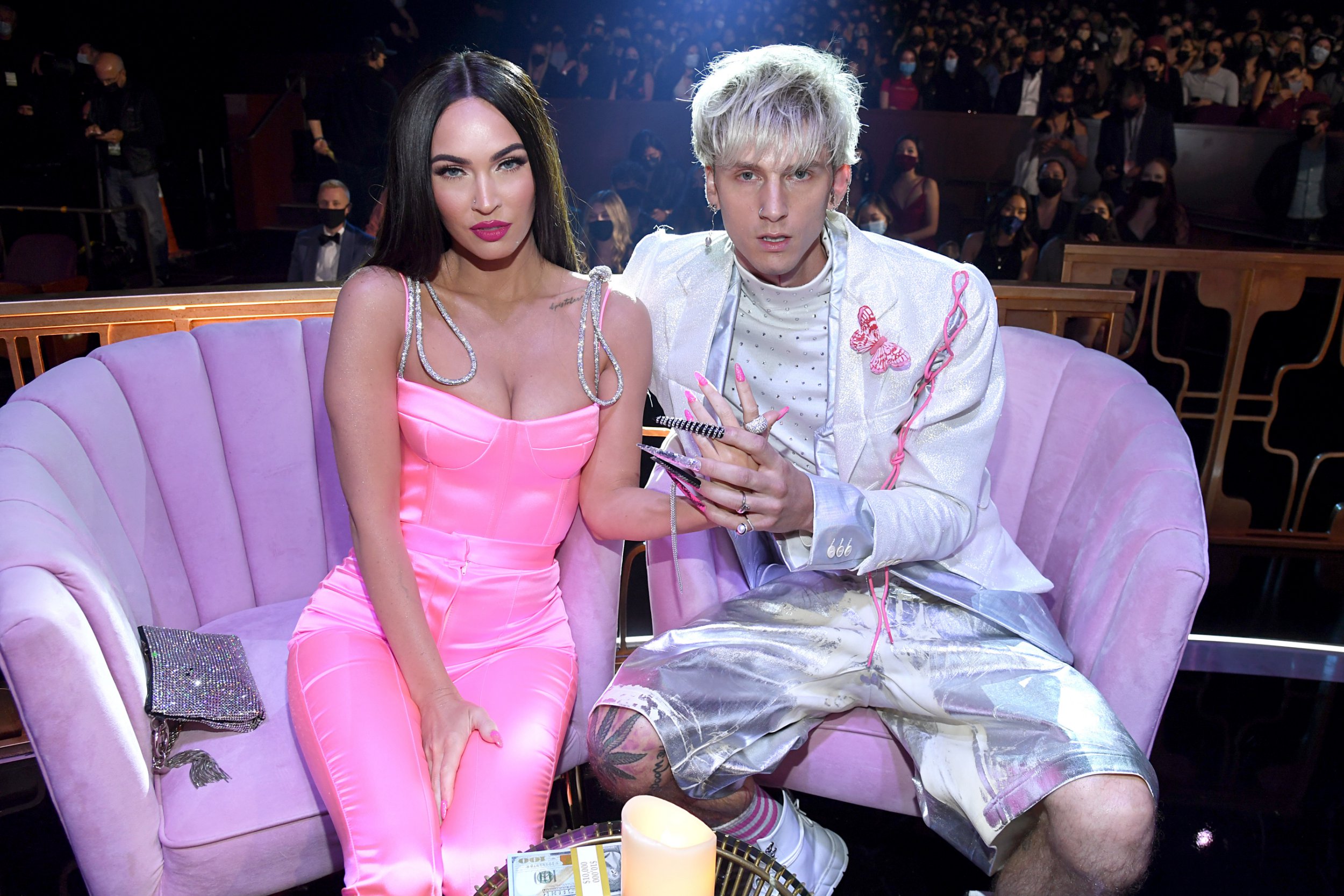 So, Megan Fox and Machine Gun Kelly are engaged.

MGK, 31, got down on one knee and proposed to the Transformers actress outside of the Spa Botanico at the Ritz-Carlton Dorado Beach in Puerto Rico on Tuesday.

Of course, an elated Megan, 35, said yes and the couple – who met on the set of the thriller Midnight in the Switchgrass in 2020 – celebrated, not traditionally with champagne, but by ‘drinking each other’s blood’, as you most certainly do.

We can pretend to act all surprised by the blood-drinking (which, one can only assume, is a joke), but this isn’t the first wAcKy comment we’ve witnessed between these two lovers, nor is it even the first time they’ve publicly spoken about one another’s blood.

Because are you even in love if you’re not playing with your paramour’s blood?

If you’re keen for the intel on the engagement, Megan announced the news with photos and video from the romantic proposal with the caption: ‘In July of 2020 we sat under this banyan tree. We asked for magic. We were oblivious to the pain we would face together in such a short, frenetic period of time.

‘Unaware of the work and sacrifices the relationship would require from us but intoxicated off of the love. And the karma.

‘Somehow a year and a half later, having walked through hell together, and having laughed more than I ever imagined possible, he asked me to marry him.

While we can only wish MGK said he ‘wished he could vape’ Megan, like his Saturday Night Live counterpart Pete Davidson, reality is, frankly, so much better.

In the pair’s first Valentine’s Day together, MGK – real name Colson Baker – stated: ‘i wear your blood around my neck.’

Proving that was true, the star shared a picture of an orb on a pendant, with what appeared to be a drop of blood inside it.

How very Billy Bob and Angelina circa early 2000s.

On the same Valentine’s Day, Megan shared an ode to her beloved and called him ‘rehab barbie’.

Later on MGK explained the whole blood thing during an appearance on The Ellen Show and confirmed Megan gifted him the drop of her blood before she went to Bulgaria for a film.

He said: ‘I mean, some people give a handkerchief to their partner or whatever. She gave me her DNA.’

During an appearance on podcast Give Them Lala…With Randall Megan dismissed the idea the pair were ‘soul mates’, instead preferring the term ‘twin flames’.

What is a ‘twin flame’? Glad you asked.

She explained: ‘I knew right away that he was what I call a twin flame. Instead of a soul mate, a twin flame is actually where a soul has ascended into a high enough level that it can be split into two different bodies at the same time.’

Megan added: ‘So we’re actually two halves of the same soul, I think. And I said that to him almost immediately, because I felt it right away.’

She couldn’t see his face the first time they met

Megan explained the first time the pair met (years before their film), she believed ‘spirit guides’ were keeping them apart.

In a brilliant GQ interview that has us all talking, Megan said: ‘I think we weren’t allowed to see each other yet. We weren’t supposed to run into each other that night…because you literally had no face, like that thing from Spirited Away.’

How does Megan describe their love affair?

Why, that would be ‘the tale of two outcasts and star crossed lovers caught in the throes of a torrid, solar flare.’

If you’re after the full shebang, she wrote alongside their GQ cover:

‘the tale of two outcasts and star crossed lovers caught in the throes of a torrid, solar flare of a romance featuring:

She said in an interview with Nylon: ‘Loving him is like being in love with a tsunami or a forest fire,” she added. “The intensity of merging with him is just overwhelming, and the threat it poses is so powerful but so beautiful that you have no choice to surrender with reverence and with gratitude.’