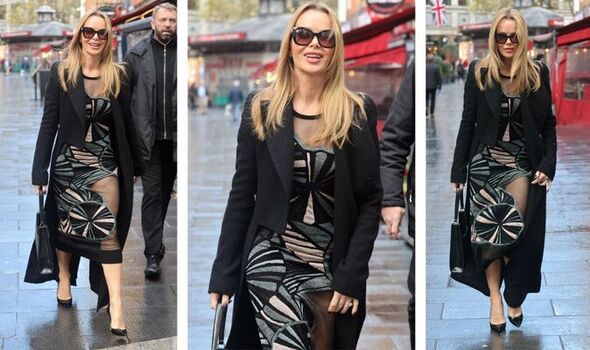 Amanda Holden looked a fraction of her age as she sashayed out of the radio station’s studios wearing the patterned dress with its eye-catching sheer sections.

With the help of her stylist, she’s been slipping into some stunningly chic outfits this week – but the sheer panelled dress she modelled today stood out by a mile for many fans.

It was designed by Kukhareva, a fashion label which describes itself as a “contemporary, ready to wear lifestyle brand” and is based in London.

Meanwhile, Amanda – whose age-defying looks and sexy outfits regularly wow the nation – has also made headlines by cheekily publicly negotiating her Britain’s Got Talent judging contract while live on stage.

She and music mogul Simon Cowell had a jokey spat at a plush awards ceremony in London earlier this week, during which she teased: “The deal is not done.”

The dress she sported was made by independent brand Kukhareva, which is fronted by Ukrainian designer Ekaterina Kukhareva, and it isn’t the first time she’s slipped on one of the fashion entrepreneur’s figure-hugging outfits recently, either.

Amanda Holden shared her look in a candid backstage snap at her show, which she then uploaded for the pleasure of her 1.8 million Instagram viewers.

Amanda Holden looked equally glam last night in a YSL mini skirt and blazer combo, which showed off her flawless legs. She had been attending a charity event with her ex-Pussycat Dolls co-host Ashley Roberts, organised by the nonprofit organisation Global’s Make Some Noise.

Amanda Holden got out on the town the previous night too

Amanda Holden looked sensational in her favourite colour, green, as she showed up at the Variety Club Showbusiness Awards 2022 at a swanky London hotel in Park Lane.

Amanda Holden met Naomi Campbell there for the first time

At the luxurious awards bash, Amanda Holden ran into global supermodel Naomi Campbell, who was celebrated recently after welcoming a baby at age 50. She shared a photo with Naomi, writing excitedly on her Instagram page: “When they’re everything you knew they would be.”

Amanda Holden has also been busy promoting a makeup range

Amanda Holden has invited fans to try their hand at looking as stunning as she does, while marketing her latest Revolution Pro Glam Edit box. Packed full of makeup goodies, it debuted at Superdrug last weekend.