Angelina Jolie’s daughter Shiloh, 15, wears a dress on the red carpet for the first time as she joins her siblings at the Eternals premiere

Angelina Jolie’s daughter Shiloh Jolie-Pitt wore a dress on the red carpet for the first time at the Eternals premiere in Los Angeles on Monday.

The 15-year-old student often wears slacks when joining her mother at public events, but opted for a new look as she posed outside the Dolby Theatre in Hollywood.

Also at the event were her siblings Maddox, 20, Zahara, 16, and 13-year-old twins Vivienne and Knox.

‘She wants to be a boy,’ she told Vanity Fair in 2011. ‘So we had to cut her hair. She likes to wear boys’ everything. She thinks she’s one of the brothers.’

Apparently coining a new fashion term, she said: ‘Shiloh, we feel, has Montenegro style. She dresses like a little dude. It’s how people dress there. She likes tracksuits, she likes [regular] suits.’

Meanwhile, Shiloh’s father Brad Pitt revealed back in 2008 that Shiloh requested that she be addressed as John since the age of two.

Brad told Oprah Winfrey: ‘She only wants to be called John. John or Peter. So it’s a Peter Pan thing. So we’ve got to call her John. “Shi, do you want…” “John. I’m John.” And then I’ll say, “John, would you like some orange juice?” And she goes, “No!”

‘So, you know, it’s just that kind of stuff that’s cute to parents and it’s probably really obnoxious to other people.’ 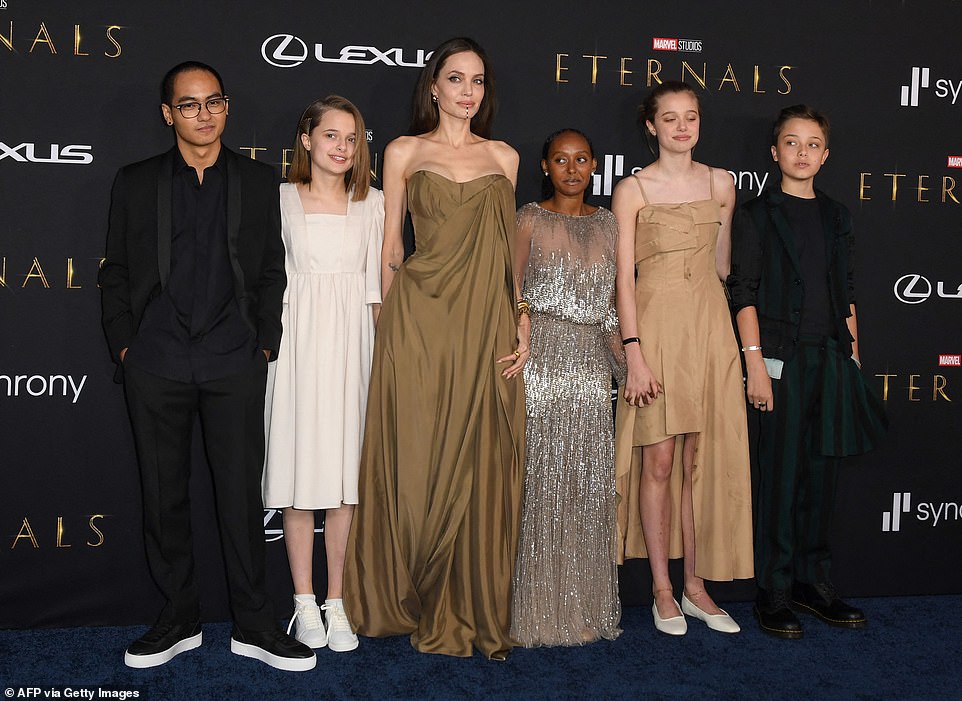 Family first! Angelina was joined on the red carpet by five of her six children, (L-R) Maddox, Vivienne, Zahara, Shiloh and Knox as they posed outside the Dolby Theatre ahead of the film screening

Addressing the name change at the time, Angelina said that there was no need to ‘interpret’ anything from the request.

In an interview with The Daily Mail, Angelina said: ‘I don’t think it’s for the world to interpret anything. She likes to dress like a boy and wants her hair cut like a boy and she wanted to be called John for a while.

‘Some kids wear capes and want to be Superman and she wants to be like her brothers. It’s who she is. It’s been a surprise to us and it’s really interesting, but she’s so much more than that – she’s funny and sweet and pretty. But she does love a tie…’ 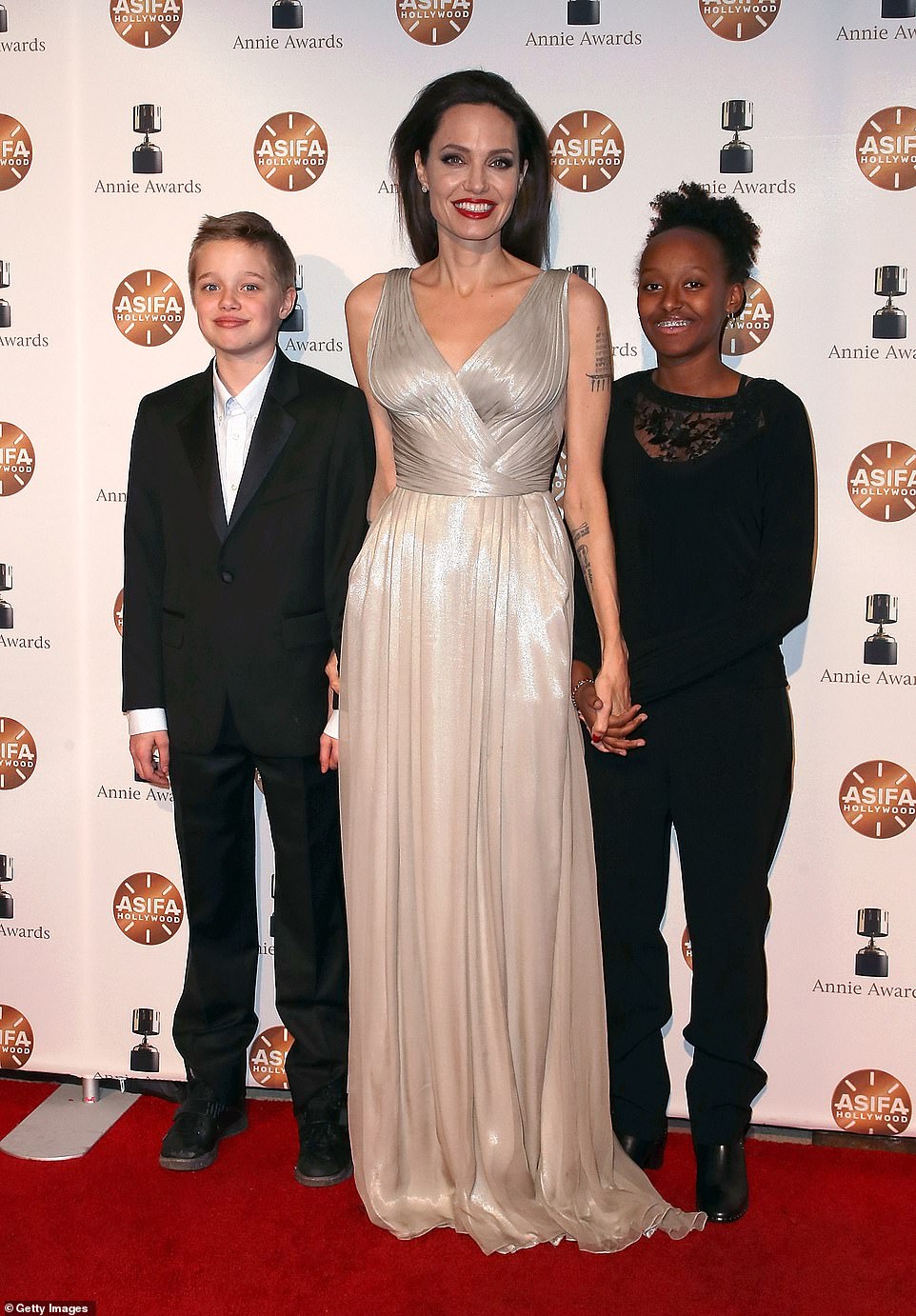 Suited up: At the premiere 45th Annual Annie Awards at Royce Hall in LA in 2018, Shilo wore a black suit as mom had on a gold dress and Zahara modeled a black outfit

Angelina and Brad welcomed Shiloh, their third child and first biological baby in Swakopmund, Namibia in 2006.

The youngster is home schooled with her other siblings and is learning about her home country in Africa. The granddaughter of Jon Voight also likes to paint and ride her bicycle, her mother previously told Vogue.

The teen is no stranger to the red carpet – she has already posed at the premieres of Maleficent: Mistress of Evil, Dumbo and Kung Fu Panda 3.

But when on the carpet for those splashy events, Shiloh opted for jeans or slacks with hoodies. 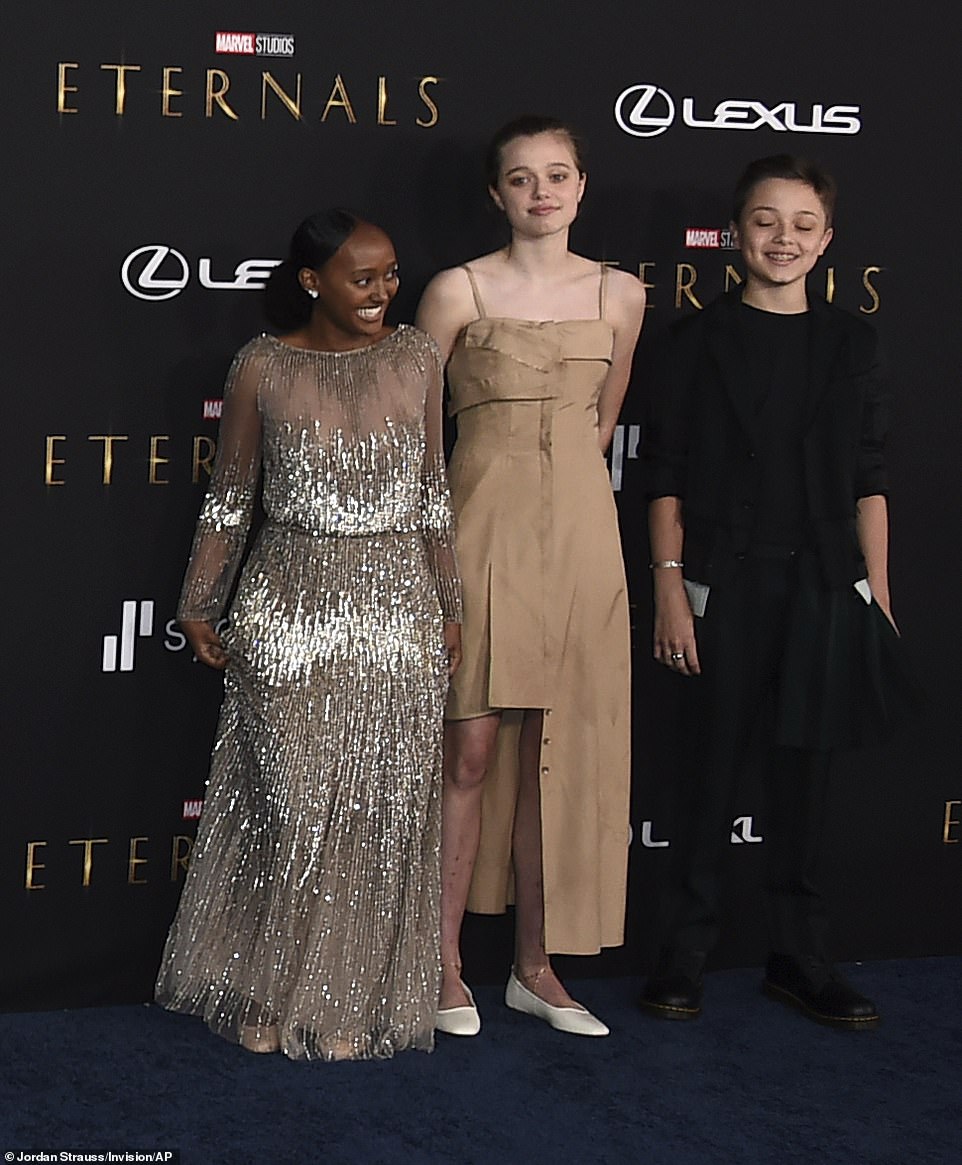 Solo shot: The kids – minus 17-year-old son Pax Thien – dutifully gave their mom room to pose on her own at the event

Shiloh and her siblings were out in force to support their mother Angelina at the Eternals premiere.

The 46-year-old Oscar winner plays fierce warrior Thena, who can form any weapon out of cosmic energy, in the MCU flick, which hits US/UK theaters on November 5.

Angelina made quite the fashion statement wearing a bold gold chin cuff which injected even more glamour to her already head-turning piece. 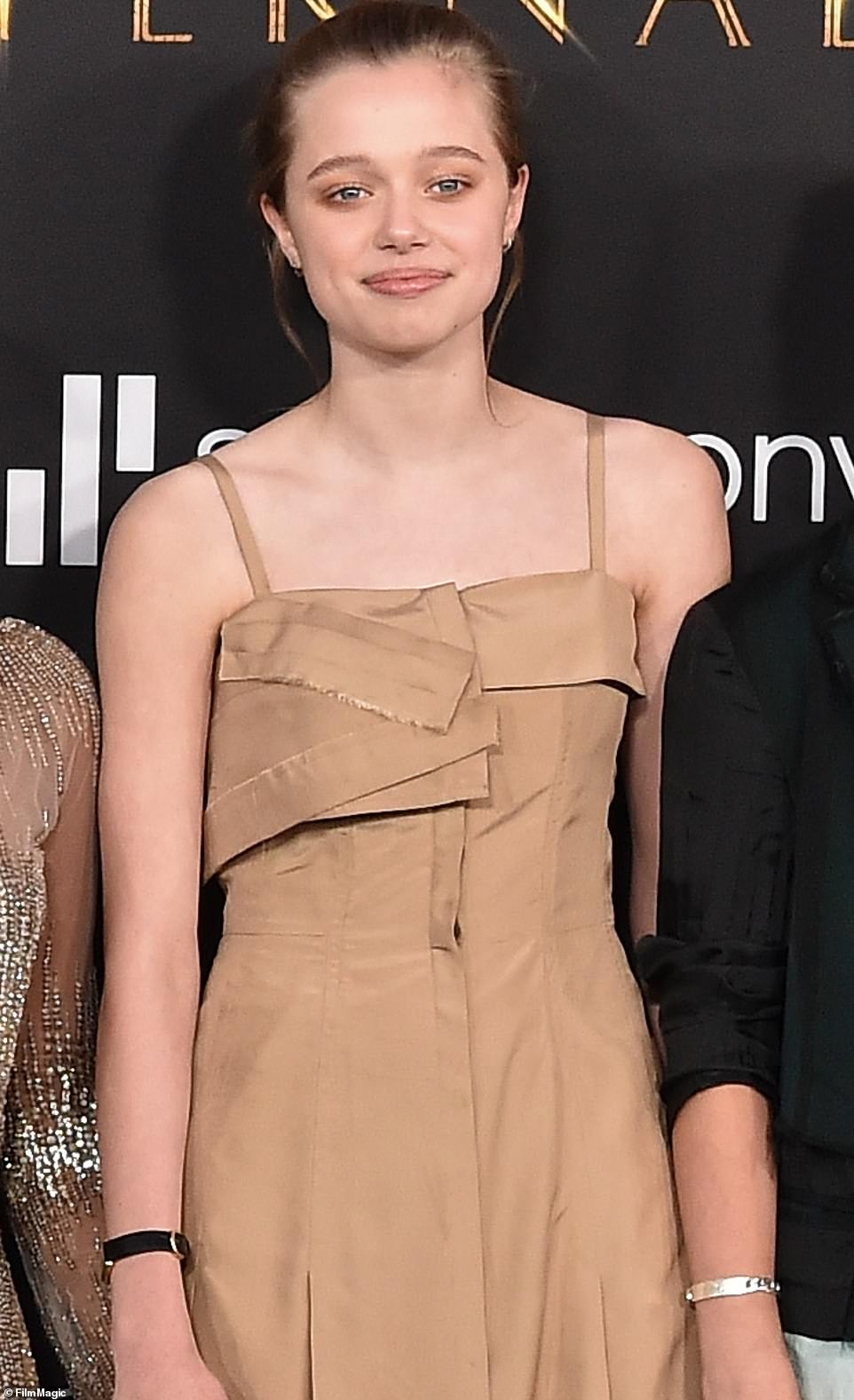 Like mom: Shiloh was born to Angelina and Brad Pitt in Swakopmund, Namibia in 2006. She is home schooled with her other siblings and is learning about her home country in Africa. The granddaughter of Jon Voight also likes to paint and ride her bicycle, her mother told Vogue

Angelina told Extra’s Samantha Harris that her kids don’t talk much about her Marvel character.

‘I think they just find me funny,’ she said, adding, ‘I think someone said the other day, “Isn’t it amazing you can like fly a plane and do all the stuff at the U.N. and you can be in a Marvel movie, but you can’t make eggs?”‘

But there is one domestic duty she enjoys: ‘Dishes, I don’t mind dishes.’

And she also said she was a very hands on mom that changed diapers: ‘I used to get peed on a lot, you know, when you are changing diapers and stuff and you are on the way out that was always a fun time.’ 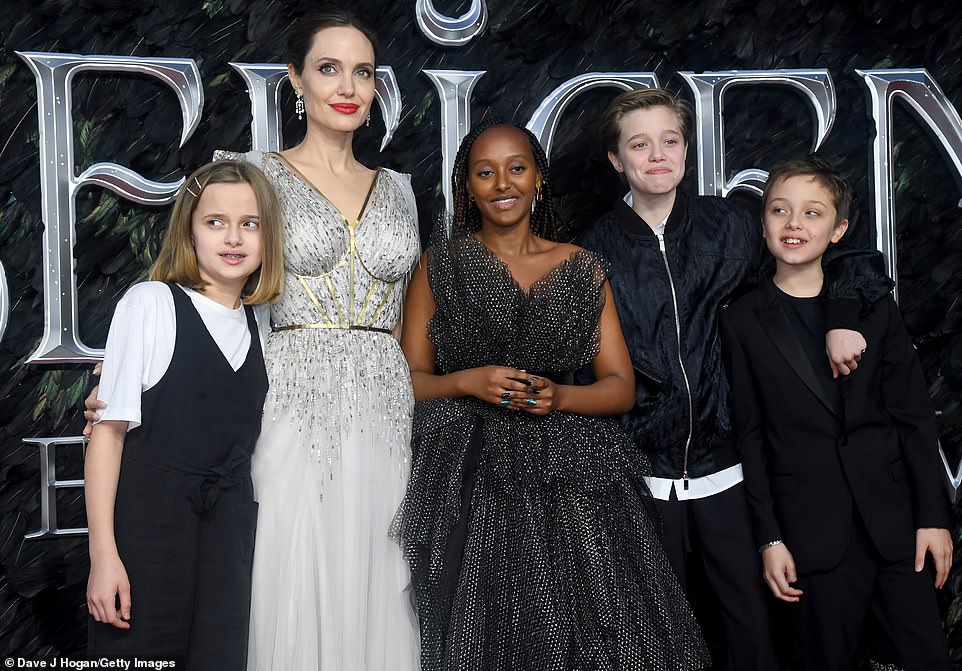 More casual: And at the European premiere of Maleficent: Mistress of Evil at Odeon IMAX Waterloo in 2019 in London, SHi had on a zip up jacket and slacks

As far as raising her kids, she said she tries to teach them to ‘be their true selves and teaching them to be able to hold on to that… We are all born powerful… We just get a lot that breaks us down… I hope they are soft, I hope they are kind, and I hope they feel strong enough to protect that.’

Nearly all of Angelina’s children were present for the special event, except for her 17-year-old son Pax.

She shares her six children with her ex-husband Brad Pitt, whom she is in the midst of a tense divorce battle with.

Last month, DailyMail.com exclusively revealed how Jolie was trying to sell her 50% stake in the vineyard that she shared with Pitt, held through her company, Nouvel.

Her move to sell – which she did this month on October 6 – was branded ‘vindictive and systematic obstruction’ by the actor in bitter lawsuit. 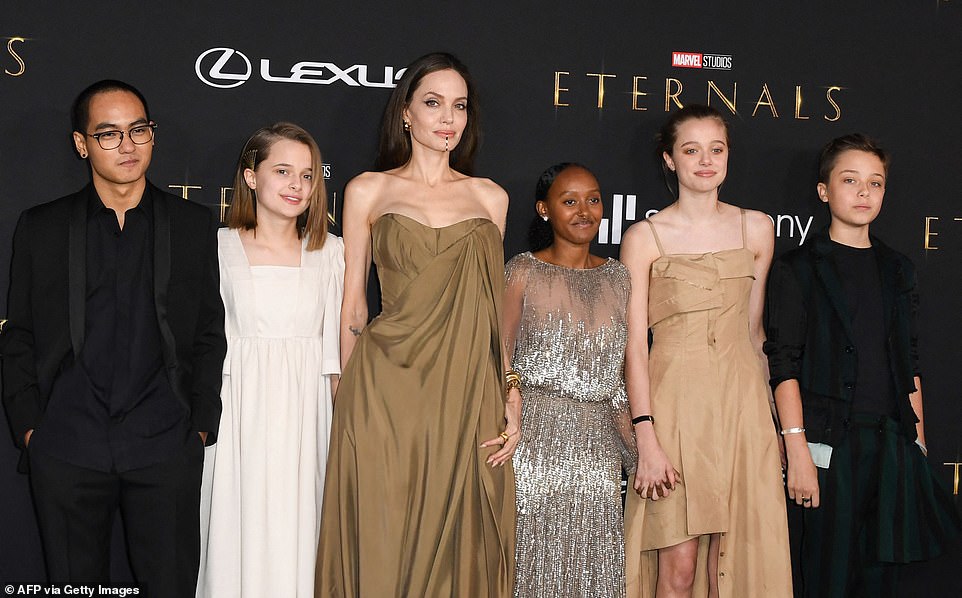 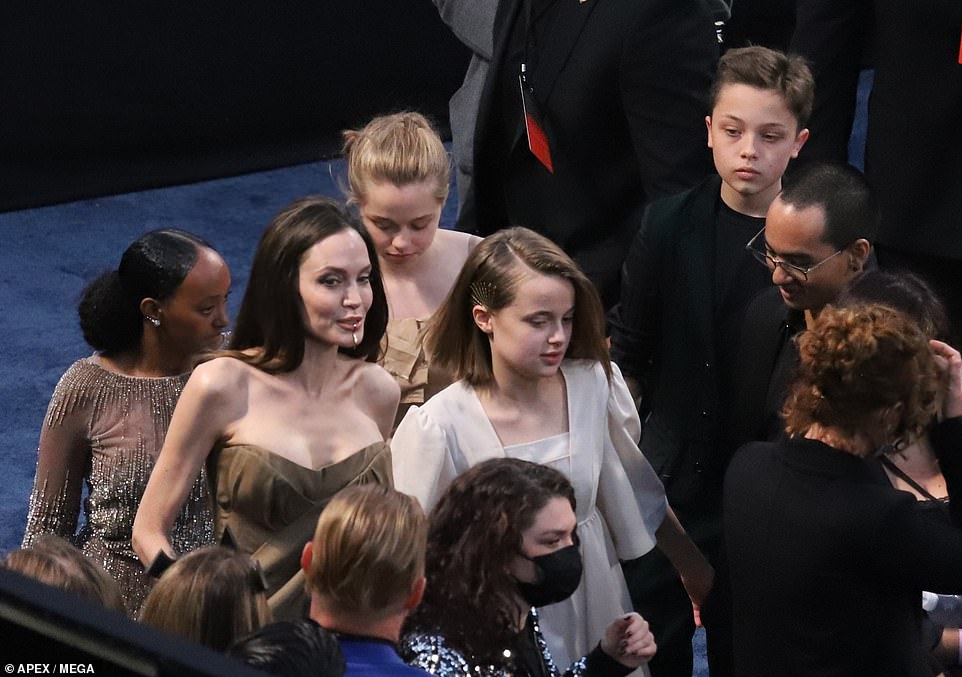 Full house: Jolie and her blended brood seemed excited to dress up and watch their famous mother’s movie as a family

The Eternals, set for release in cinemas in November, follows a race of immortal beings with superhuman powers who are secretly living on Earth. 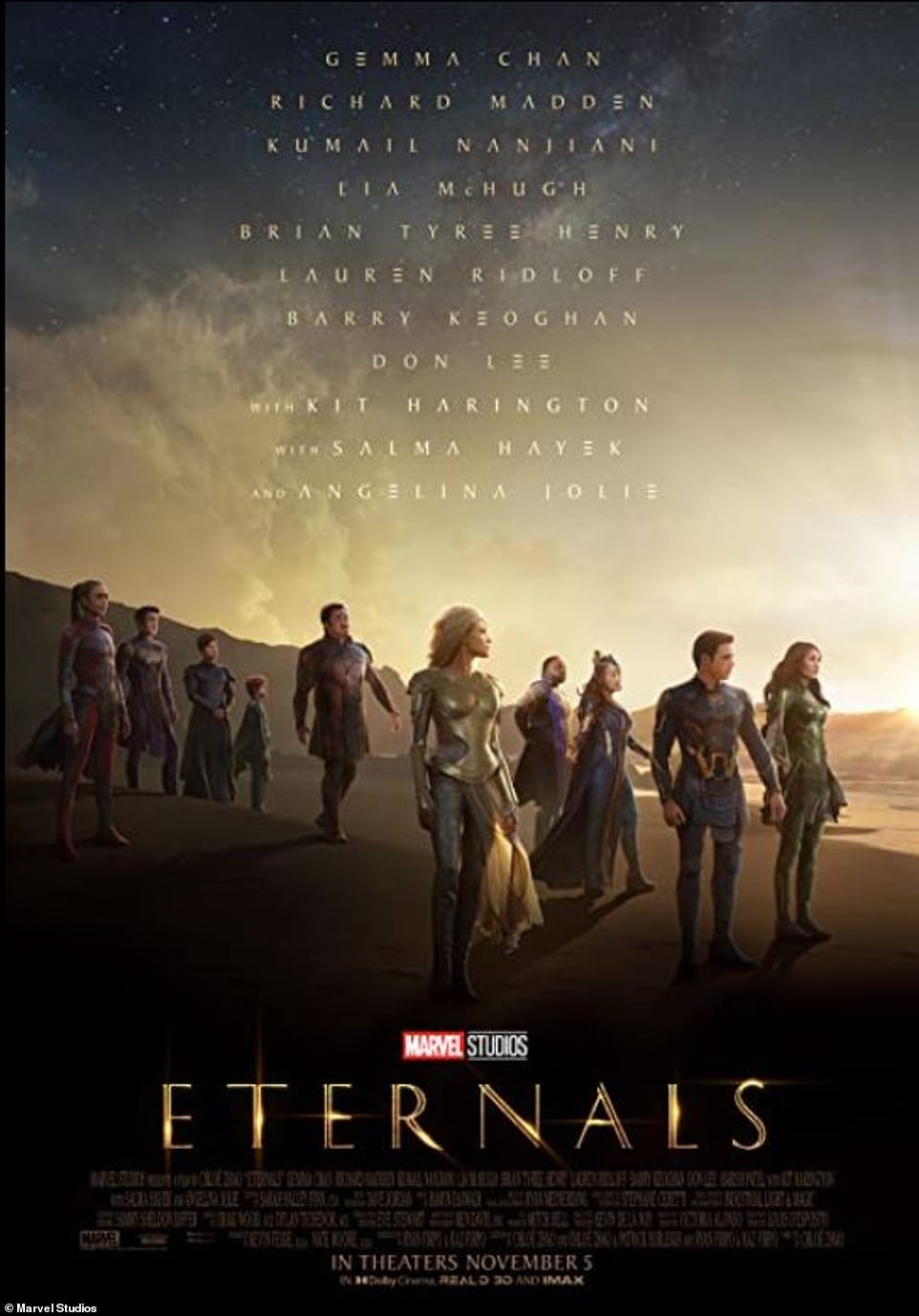 Coming soon: Eternals will be released in U.S. theatres on November 5, 2021