From Barry Jenkins, the Oscar-winning filmmaker behind Moonlight and If Beale Street Could Talk, comes a stunningly beautiful and powerful TV adaptation of Colson Whitehead’s Pulitzer Prize-winning novel, The Underground Railroad. Telling the story of a young slave named Cora Randall (Thuso Mbedu), the Amazon series follows her as she goes on a harrowing journey through the antebellum South to find freedom in the North by way of the mysterious (and real) underground network of trains, tracks and tunnels.

On one hand, this 10-episode story is a historical drama, taking viewers back in time to an era of American slavery in an otherwise fictional tale. But it’s also an alternate version of history, with a real-life railroad system brought to life in a surreal way by Jenkins, that allows the Underground Railroad to be considered science fiction.

For Jenkins, who is a big fan of the genre, “sci-fi is a great descriptor because I knew that we weren’t making a show about actual history,” he tells ET, adding that as the series progresses, “the genre kind of shifts as we go on.”

In fact, the way the filmmaker describes it, the series ebbs and flows in and out of various genres with the first episode being something different entirely than what’s seen or experienced later on. “It might as well be National Geographic in a certain way. This is an episode about the American institution of slavery,” he says. “As we go on from that, we drift away deeper and deeper, especially once we get on the railroad, into sci-fi and this magical realism.”

And when it comes to the Tennessee episodes, the director describes those as his George Miller’s Mad Max moment, which was something tonally different from the episodes before and the episodes that come after. And while he knew he didn’t have the “muscle” to replicate that, he took some inspiration from Andrei Tarkovsky’s 1979 Soviet sci-fi art film, Stalker, about men riding a train into a mysterious zone.

By adding those elements to the story, Jenkins says they were then allowed to push the visionary storytelling to include things like Cora’s surreal dream sequence about the railroad hub in episode eight, or the way one character, Young Mack, survives a fall into the well with his lit match in episode four.

Because of that, “we can get away with these things,” Jenkins says. “You know, we’ve been constantly letting the audience know the rules that we’re playing by here are not governed by National Geographic. It’s almost like this science fiction universe that’s speaking towards some very real things.”

And that’s something Jenkins held onto when adapting the novel for the screen because it gave him some freedom in telling the story, especially in places where he wanted to bend the rules. 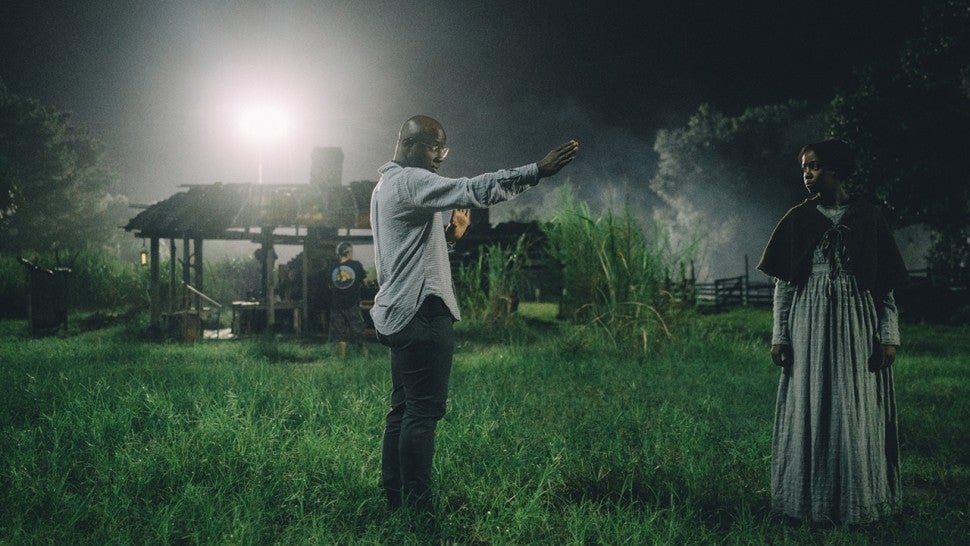 While The Underground Railroad allows Jenkins to push the rules and boundaries of storytelling, especially on TV, he has yet to figure out what his true sci-fi project would be. Since winning his directing Oscar for Moonlight, he’s spoken candidly about wanting to make something in the vein of Denis Villeneuve’s work or on the scale of Ryan Coogler’s Black Panther.

In the time since, he says that he’s been trying to figure out what kind of story that would be. “I’ve seen films that other people made and I was like, ‘Sh*t. I wish I had made that,’” Jenkins says, noting that he has somehow slipped into this world of “working on nothing but adaptations,” which includes James Baldwin and Lion King.

He adds, “So maybe there’s some kind of book from the 1970s I need to dig up and find. But someday I think it will happen, especially after working on this. Some of the more sci-fi elements were really fun to explore.”

Of course, there are plenty of books to choose from, especially Black authors, like Octavia E. Butler, whose work is reportedly always being developed for the screen. And when asked if we’re reaching a moment in Hollywood, where we’ll finally see more Black sci-fi, or even Afrofuturism, especially following the success of the horror genre expanding to tell stories centered around marginalized people, Jenkins thinks there’s an appetite for it.

“There are filmmakers who are obsessed with it. And so, I do think there is a moment. But it’s happening organically,” Jenkins says. “I think there are some really amazing storytellers, who are champing at the bit, you know, who are probably right now, actively creating that content.”

The filmmaker concludes by saying, “If people want to make money, then they will fund Black sci-fi.”

The Underground Railroad is now streaming on Amazon.