Clive Myrie has hit back at BBC News viewers who launched a “vitriolic pile on” aimed at him over his coverage of Queen Elizabeth II’s death yesterday. The Mastermind presenter came under fire on social media after saying on-air that the energy bills crisis is “of course insignificant now” given the “gravity of the situation” regarding news of the Monarch’s health.

One outraged online user took to Twitter to share a clip of Clive presenting the BBC News special, in which he discussed the concerns surrounding Her Majesty’s health prior to her death being confirmed by Buckingham Palace.

In the video, Clive could be hear saying: “The news a little bit earlier on today that the doctors in Scotland were concerned about the Queen’s health, coming as Liz Truss was making a rather important statement concerning the future of energy bills, of course insignificant now, given the gravity of the situation we seem to be experiencing with Her Majesty.”

The caption of the video, uploaded by TomDRogers1, read: “Here’s BBC News Presenter Clive Myrie saying that the Energy Bills Price Crisis is “of course insignificant now” given the “gravity of the situation” regarding news of the Queen’s health.”

The video appeared to cause controversy on the social media platform, with users soon replying to the tweet and prompting a response from Clive to clarify his statement. 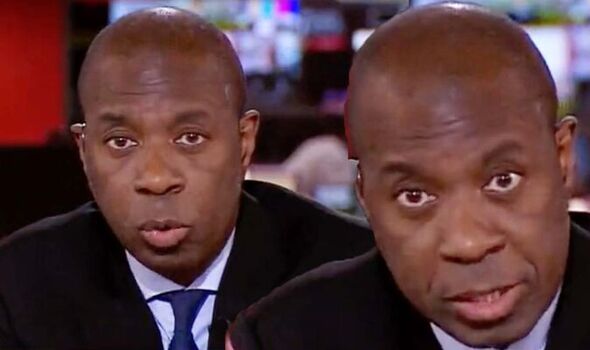 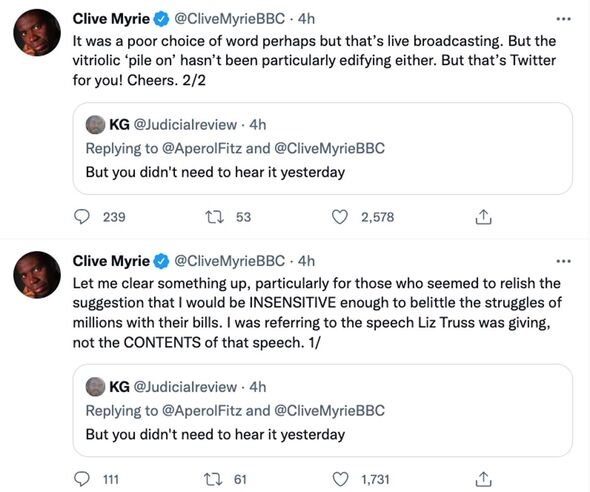 AperolFitz said: “Once again, the life expectancy for people experiencing homelessness is 45 for men, and 43 for women.

“Their deaths are no less significant than that of a monarch, and they are certainly not afforded the same comfort, security and dignity. Get a grip, @CliveMyrieBBC.”

1810allan added: “@CliveMyrieBBC and @BBCNews are you serious pal? Insignificant? Why?

“Has someone agreed to pay the bills that have trebled for people? I’m appalled at this statement.” 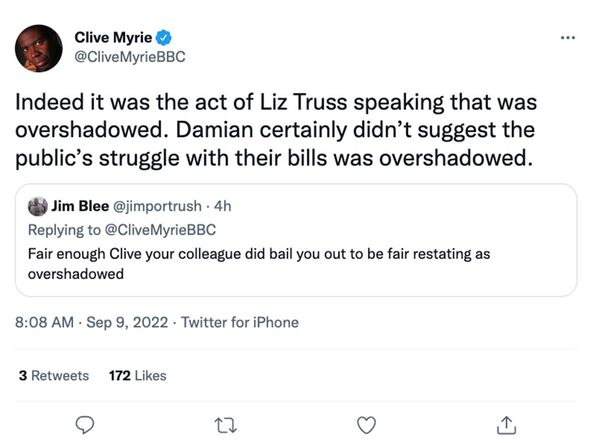 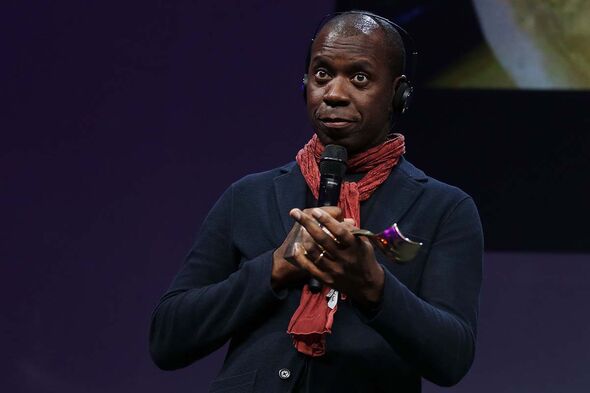 TheToriesOut tweeted: “@CliveMyrieBBC You made a huge mistake saying that. Your colleague corrected you immediately. Out of touch to the max.

“People are not going to forget their day-to-day issues over anything, where it surrounds their livelihoods, wellbeing & their future.

“Unreal to even say this.”

Clive soon addressed angry viewers’ vitriol as he responded to a tweet from JudiciaIreview, which read: “But you didn’t need to hear it yesterday.”

The journalist said: “Let me clear something up, particularly for those who seemed to relish the suggestion that I would be INSENSITIVE enough to belittle the struggles of millions with their bills.

“I was referring to the speech Liz Truss was giving, not the CONTENTS of that speech. 1/“

He went on in a Twitter thread: “It was a poor choice of word perhaps but that’s live broadcasting.

“But the vitriolic ‘pile on’ hasn’t been particularly edifying either.

Twitter user Jimportrush replied: “Fair enough Clive your colleague did bail you out to be fair restating as overshadowed.”

To which, Clive responded: “Indeed it was the act of Liz Truss speaking that was overshadowed.

“Damian certainly didn’t suggest the public’s struggle with their bills was overshadowed.”