Cardi B attempted to listen to ‘WAP’, when her daughter walked in. The rapper quickly turned off the sexual track and sipped wine. Now, she’s defending herself against critics who claim the song is ‘disgusting.’

Cardi B continues to share unintentional comedic videos on social media. This time, the rapper’s Instagram antics included her 2-year-old daughter Kulture Kiari Cephus, who walked in on her mom lip-syncing her latest single, “WAP”. If you haven’t listened to the sexual track — which debuted at No. 1 on the Billboard Hot 100 chart after its release — it contains explicit lyrics such as, “Yeah, you f**king with some wet a** p***y” and “This p***y is wet come take a ride,” amongst many others. — Therefore, when Kulture unexpectedly showed up in Cardi’s camera frame, the Grammy-winner became flustered and turned off the music.

Cardi, who donned a tie dye outfit and rainbow top knots in her hair, quickly yelled, “No, no, no, no, no,” to overpower the music as she turned it down. That’s when she hilariously sipped a glass of white wine and stood tall as if she wasn’t rapping about her… you know what.

However, while many fans found the video to be funny, other critics fired back with concerns over the song’s “inappropriate” lyrics that aren’t “suitable for kids.” — One Twitter user tweeted this response to the clip: “So ya daughter cant listen to it but everybody else’s daughter can? @iamcardib AW OKAY ! Exactly what I been saying you have an agenda to push with that trash ass label your with. DISGUSTING”.

Cardi, — who’s previously defended “WAP” as a song that’s meant for adults, having noted that she won’t let her daughter listen to it — responded with this explanation: “Ya needs to stop with this already! I’m not JoJo Siwa,” the rapper added about the 17-year-old singer and dancer who’s known for her kid-friendly lyrics. “I don’t make music for kids I make music for adults. Parents are responsible on what their children listen too or see,” Cardi continued, adding, “I’m a very sexual person but not around my child just like every other parent should be.”

In a followup tweet, Cardi wrote, “There’s moms who are strippers. Pop p***y ,twerk all night for entertainment does that mean they do it around their kids? No! Stop making this a debate. Its pretty much common sense.” 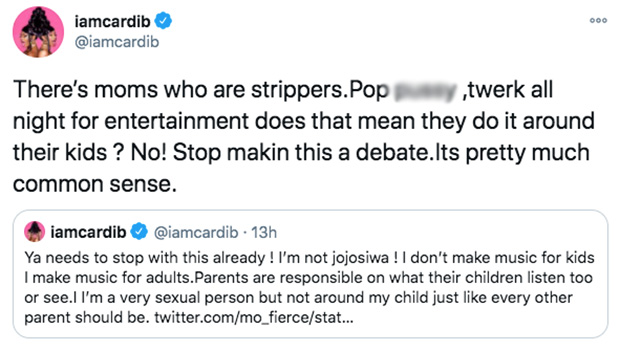 Cardi’s “WAP” lyrics have been a debate subject since the track was released in August. While haters have criticized the song, many more fans have applauded Cardi and her collaborator Megan Thee Stallion for putting out a female-empowered, sex-positive message. The music video for the song even includes all-female cameos by Kylie Jenner, Normani and more. 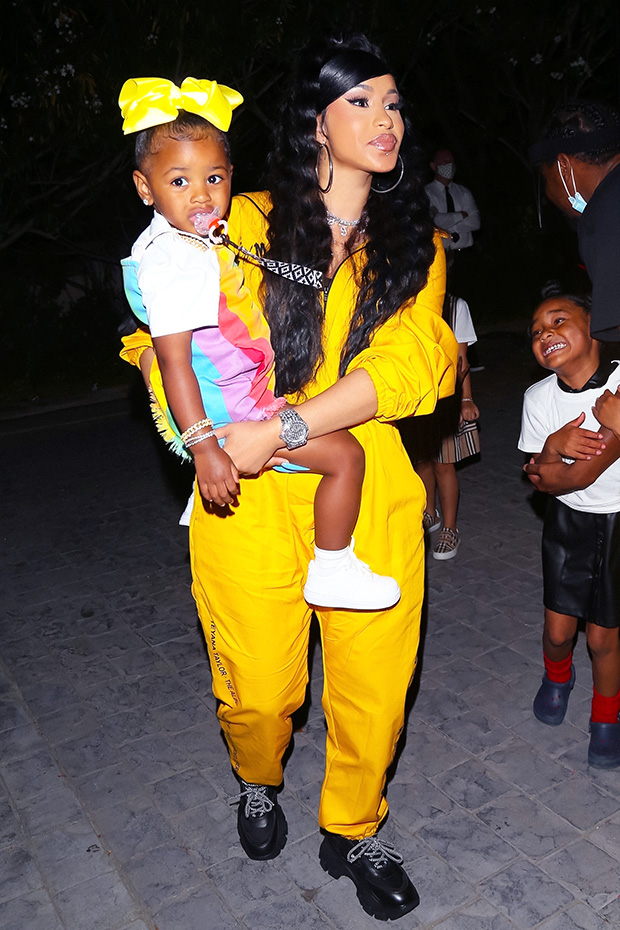 Just weeks after the track debuted at No 1, Cardi defended “WAP” and the meaning behind the song. “The people that the song bothers are usually conservatives or really religious people,” she explained on Australia’s The Kyle & Jackie O. “But my thing is…I grew up listening to this type of music. To other people it might be vulgar, but to me, it’s almost really normal.”

Nonetheless, Cardi clarified that the latter explanation doesn’t mean the song is meant for children. “Of course I don’t want my child to listen to the song,” she said. “But it’s like, it’s for adults! It’s what people want to hear. If people didn’t want to hear it, if they were so afraid to hear it, it wouldn’t be doing so good.”