Carol Vorderman, 58, has been spending the past week in Japan cheering on Wales during the Rugby World Cup 2019.

But the longhaul trip appears to have taken its toll on the former Countdown favourite as she revealed she’s feeling under the weather.

Carol told her Twitter followers today she won’t be able to present her regular Saturday slot on BBC Radio Wales as she’s “quite poorly”.

The age-defying beauty said she has a “hacking cough” and apologised to her listeners in advance for her absence.

She tweeted: “Sooooo….am still quite poorly….and having to sign out of my @BBCRadioWales show tomorrow as you won’t want to hear my hacking cough for two hours…ugh… bleurgh and all those things.

Carol apologised to her listeners and commented: “Soz to everyone…..but I’ll be back.”

Many of Carol’s 414,600 followers commented to send well wishes to the radio host, with one writing: “Sorry you’re ill Cazza; we’ll miss your laugh tomorrow. Hope you soon feel better.”

A second said: “Hope you feel better soon Carol. Wrap up warm and chill out for a few days. Xx.”

A third offered advice: Burning the candles at both end vorders, you need to rest with all this play.”

Following the messages of support, Carol wrote: “Awwwww, you’re all so lovely…..Thank you for all the Get Well Soon messages….bottom lip now quivering with ‘awwwww-ness’. 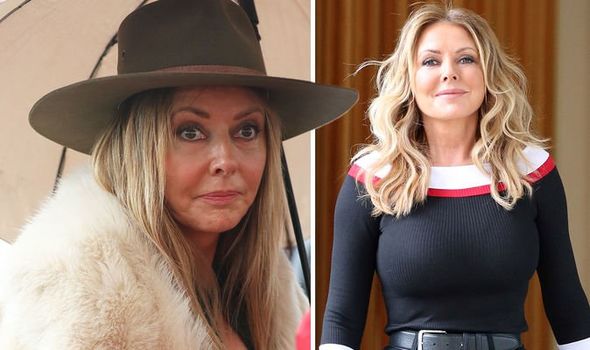 On Tuesday, Carol updated her fans about the latest leg of her trip, as she shared pictures from Hong Kong, having left Japan behind.

The presenter uploaded a series of pictures of the incredible skyline as she enjoyed the beautiful views.

In one snap, Carol beamed away to the camera whilst wearing a tight-fitted khaki top which featured a cut-out on her shoulders.

The maths whizz was pictured beside the bright lights of Hong Kong whilst sitting inside a restaurant.

Carol had been a good luck charm for Wales, as the team are through to Sunday’s quarter-final against France.

The Countdown star, who was on the show for 26 years, has posted many pictures from her time cheering on her native country.

In one photo, Carol couldn’t have looked happier as she smiled away whilst wearing a long-sleeved top which featured the Welsh dragon.

Carol had her picture taken posing in the stadium, where she kept her sunglasses on.

She matched her Welsh top with a pair of form-fitted jeans which showed off her sensational figure.