Chris Brown just confirmed that he is the father of Diamond Brown’s baby, Lovely. He posted a sweet photo fo the little one to celebrate her three month birthday.

After rumors swirled about Chris Brown being the father in question to Diamond Brown‘s baby, the musician just confirmed he indeed shares a child with Diamond. The “Go Crazy’ singer shared an adorable photo of the little one on his Instagram Story on April 8. The pic was posed to celebrate the baby girl, whose name is Lovely Brown,  turning three months old. Chris posted a string of red heart emojis underneath the image. This is the first time he’s publicly acknowledged the baby.

Diamond first showed off her baby bump in a slew of stunning photos in Hawaii on Sept. 9. “Just when you think you know love, something little comes along to remind you just how big it really is,” she captioned the Instagram post. Since then, the brunette beauty has shared numerous pics of her growing baby bump, celebrating with a gorgeous baby shower on Nov. 7 in Los Angeles.

Up until Chris’ announcement, Diamond had not revealed the identity of the baby’s father, but due to her rumored past flings with Chris, fans were speculating he would be sharing the child with her. In the comments section of Diamond’s Nov. 24 Instagram post, one follower said, “baby breezy is almost here.” A different fan wrote, “Young CB coming soon,” while a third person tagged Chris and congratulated him in the comment section, sharing a baby bottle and teddy bear emoji.

The pair were previously romantically linked in June 2019, when Chris “liked” one of the young model’s IG posts while Ammika Harris was pregnant with Chris’ second child, son Aeko Brown, 2. Diamond had also attended the “Forever” singer’s 30th birthday party in May 2019.

Chris Brown & His Kids: See Their Epic Moments Together 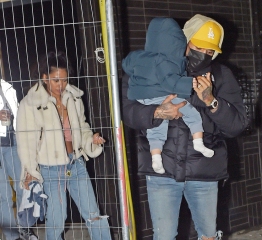 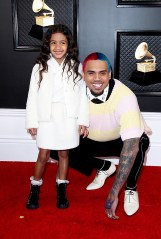 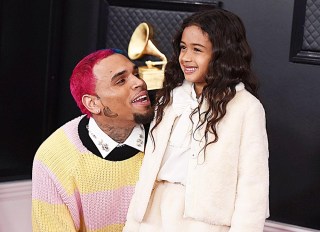 In addition to his new baby, Chris is the father of two children, son Aeko and daughter Royalty Brown, 7, whom he shares with ex Nia Guzman. Nia and Royalty live in California. Aeko, meanwhile, lives in Germany with Ammika, making it challenging for Chris to visit his son. “Chris is always sending little gifts,” a friend of Chris’ said in October. “He can’t wait to continue seeing his little boy grow up.” We’re guessing Chris will likely go “above and beyond” with his new little one with Diamond as well!