If there’s one thing we learned from Cole Sprouse’s relationship with his Riverdale co-star Lili Reinhart, it’s that he’s super low-key when it comes to PDA. Like, this dude is not about to pull a Kravis and start making out in the middle of his neighborhood Hot Topic, you know? But he does appear to be in a new relationship following his split with Lili, and word on the Jingle Jangle-infested streets of Riverdale is that he’s dating model Ari Fournier.

Thanks to Cole and Ari not exactly being the types to go Insta official and write a buncha gushing posts about each other, they technically haven’t *confirmed* their relationship status. But pap pics don’t lie, and it seems pretty clear that these two are a t-h-i-n-g. And now that Riverdale is gearing up for its season 6 premiere (it’s coming back on November 16, mark your calendar / prepare your body, etc.), it’s definitely possible that Cole and Ari could start attending events together. Sure, it took him and Lili almost two years to make their red carpet debut, but ya never know! Either way, it’s clearly time to get to know Ari better, so here’s a casual deep dive.

Ari Fournier Is a Profesh Model

Twenty-two-year-old Ari is from Canada, and works with Elite Model Management on shoots alllll around the world. You can check out a ton of her modeling work on Insta, if you feel like a deep dive of your own!

FYI, Ari (whose mom was also a model) started modeling on her Instagram when she was just 15, and was soon asked to join an agency; she went full-time after finishing high school. Rude how no agencies have ever reached out to sign me based on my Insta pics, but kay.

Or, at least, that’s when Page Six first spotted them on a date in Vancouver, where they were seen having brunch in the Gastown area and walking around while Cole vaped and Ari looked cool in a black leather trench coat. It was, to be frank, a whole mood. Also a mood? This more recent pic of them cuddling in Echo Park over Memorial Day weekend. 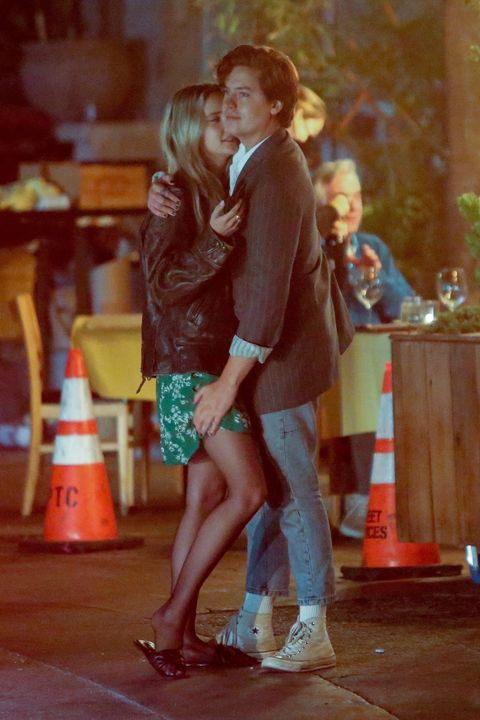 I mean…this is honestly very cute!

It’s mostly focused on beauty, modeling, travel, and lifestyle. Here’s how she gets her “cool girl waves” if you’re wondering!

She Grew Up on a Farm with Horses

Ari revealed on YouTube that “I actually grew up on a farm with horses. I actually grew up literally riding horses out in the country side. It was just simple. Horses, dogs, and cats, it was just the most simple childhood. Honestly I’m so grateful for that now because I live such an intense life, I’m really happy that I have a good grounded upbringing in my life baggage.”

She Was in a 4-Year Relationship Before Cole

The more you know!

Here’s to hoping we see cute red carpet vibes from Cole and Ari soon because I am starved for celebrity PDA content and I can only handle so much more Kourtney and Travis finger-sucking in my life.