Demi Lovato and Max Ehrich ended their engagement, and dude is…being the opposite of chill about it. While Demi has remained entirely silent about the split, Max has written several Instagram Stories posts—first alleging that he heard about the breakup in tabloids, then doubling down on those claims, and finally declaring his love for Demi and sharing a bunch of her songs. 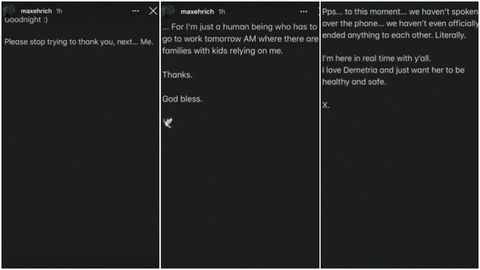 Soooo, how does Demi feel about Max going off on Insta for the entire world to see? Not great. A source tells E! News that “Demi wants no contact with Max at this point. She is completely embarrassed at the way he’s been acting and putting their relationship on blast via social media. She wants nothing to do with him.”

The source also confirms that Max has “tried to reach out” to Demi and is “in denial” that their engagement is over. Apparently his “erratic behavior” is “worrying” Demi, who “does not want the situation to escalate.”

“Demi is completely done and doesn’t want to see him again at this point,” the source says. “She can’t believe she fell into his trap and is really upset over it.”

Breakups are never easy, but here’s to hoping Max is respectful of Demi’s need for space!