EDEN CONFIDENTIAL: Why memoir by Cara Delevingne’s mother is ‘too painful’ for her family

When top model and actress Cara Delevingne’s mother, Pandora, chose to pen a revealing memoir about her struggle with drug addiction, she hoped to help those in similar situations find a way out.

Sadly, I hear the society stylist has been forced to delay the book’s publication as stories from her painful past have proved too hurtful for the family.

‘It’s all done, but I’ve put it on hold because it’s upsetting my loved ones,’ she tells me. 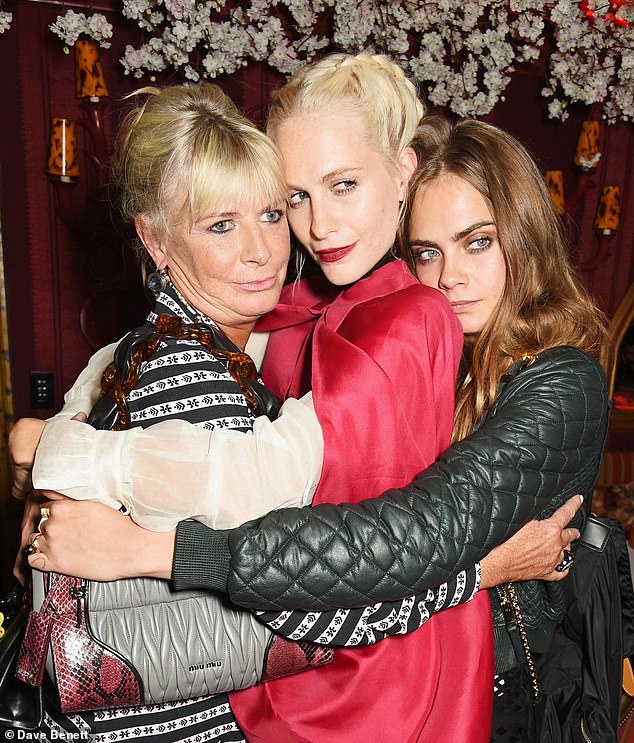 Pandora Delevingne, 62 (left), pictured with her daughters Poppy (centre) and Cara (right) in 2015. She chose to delay publishing a revealing memoir about her struggle with drug addiction

‘It’s hard. I don’t mind for myself, but it’s difficult for my family.’

Pandora, 62, who’s advised the Duchess of Cambridge on her outfits, is married to property developer Charles Delevingne, 72, and the mother of Chloe, 36, actress Poppy, 35, and Cara, 29.

While they were growing up, Pandora would sometimes move out of their home to spare them the distress of seeing her at rock-bottom. 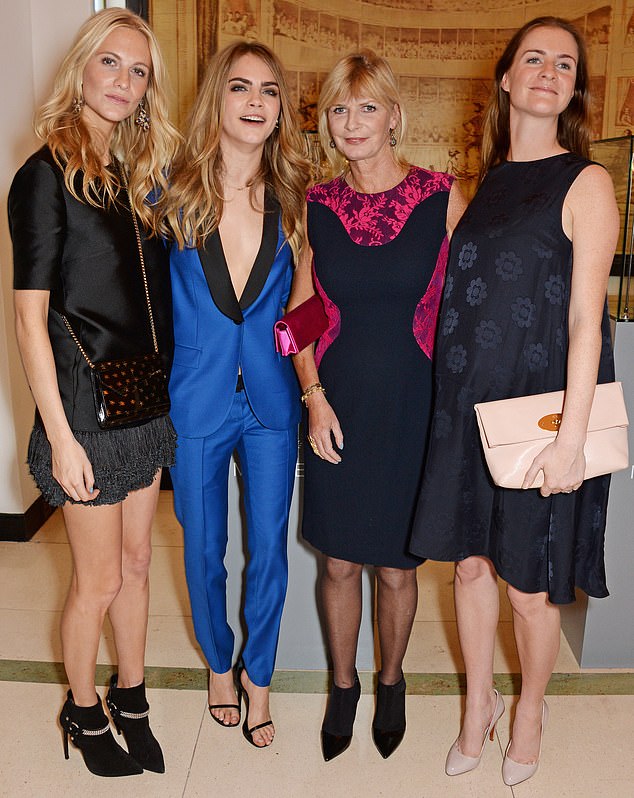 ‘The children know a lot because they were there for it, but there’s a lot they don’t know, and I’m checking it out slowly with each of them,’ she explains.

‘I’m doing this with all my loved ones.’ 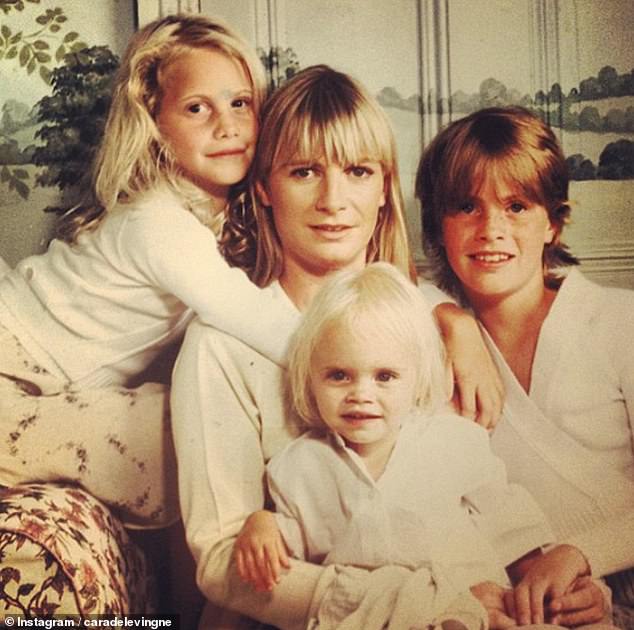 Pandora with her daughters when they were children. While they were growing up, she would sometimes move out of their home to spare them the distress of seeing her at rock-bottom

‘My mother was so sad when I told her about some of the stories and described what I was going through — but she’s very happy that I’m better, of course,’ she adds.

When I saw Chloe at a party last week, she told me the book wasn’t coming out — but Pandora insists: ‘It will come out next year. I’ve had a lot of interest from publishers.

‘I don’t mean to sound arrogant, but it’s too important a book not to publish. It would help so many people.

‘It would give people inspiration: it is possible to lead a normal life again, like I do.’

Prince Charles has raised thousands for charity by selling his watercolours, but not many know his wife is a dab hand with a brush, too. And now the Duchess of Cornwall has paid glowing tribute to Neil Forster, who taught them to paint. She’s written the foreword to the catalogue which accompanies a new exhibition of the late artist’s work at the Osborne Studio Gallery in Belgravia. ‘Neil was an extraordinary man: an artist through and through, with the soul, the temperament and the frayed clothes to match,’ Camilla says. ‘His outstanding skills were equalled by his gifts for living and for teaching.’

Getting the hang of being married

Couples who swing together, stay together. At least that’s what society model Sabrina Percy hopes.

The Tatler cover star, 31, wed Franco Manca pizza heir Phineas Page, 39, less than two months ago and she’s already signed them up for classes at the £2,500-a-year Arts Club in Mayfair.

‘Just trying to get back into the swing of things post-wedding and, of course, loved hanging out with Phineas,’ she says, sharing a picture of them hanging upside down in hammocks. 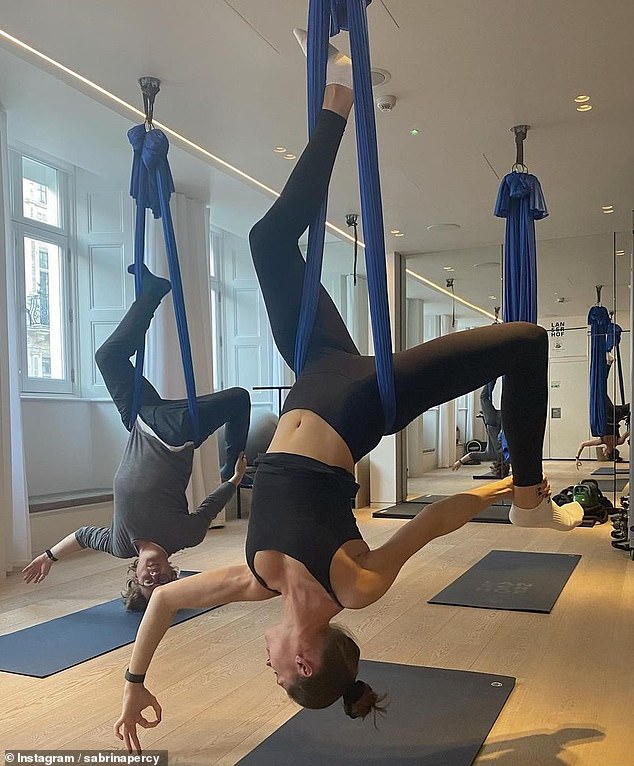 Sabrina Percy and Phineas Page practicing aerial yoga, which is said to be good for improving flexibility, together 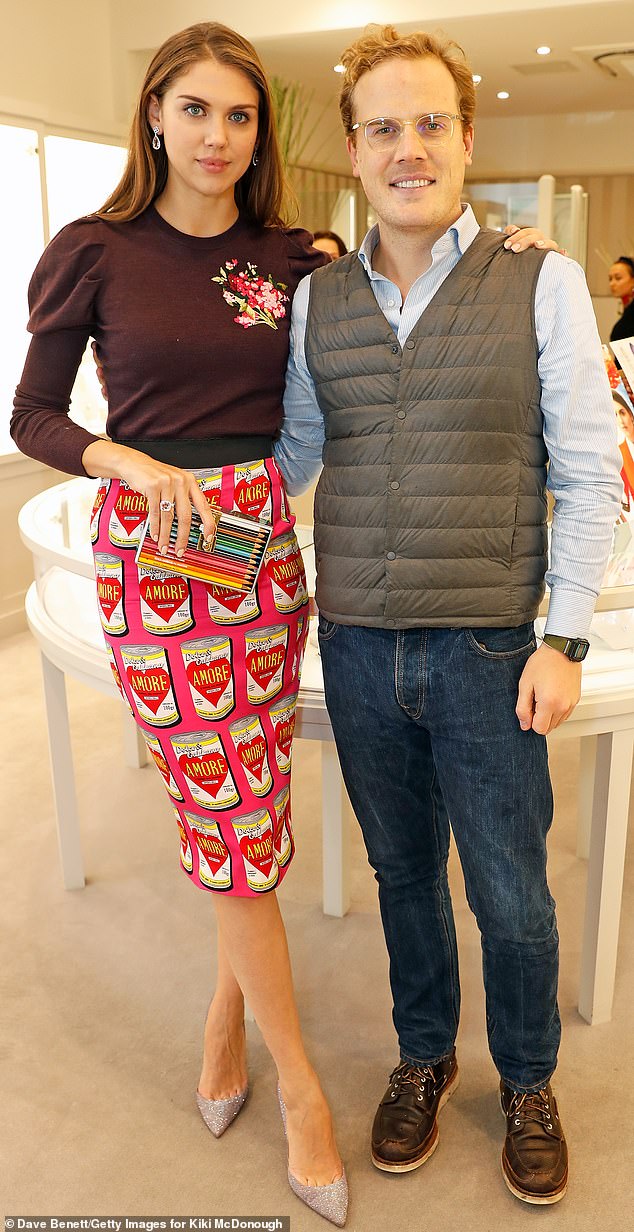 Aerial yoga, which is said to be good for improving flexibility, has attracted devotees including Gwyneth Paltrow and Sir Mick Jagger.

Sabrina, a distant relation of the Duke of Northumberland, says of her husband’s performance: ‘I was pleasantly surprised.’

HER first husband, Julian Glover, played a Bond villain in For Your Eyes Only, but Dame Eileen Atkins has revealed that she hasn’t sat through a single 007 outing.

‘I’ve never seen a James Bond,’ admits the celebrated actress. ‘I saw a bit of one and couldn’t bear it.’

She made an effort to watch her fellow dame, Judi Dench, who played MI6 chief M in the secret agent films.

‘I tried to watch the one with Judi,’ Dame Eileen says of Dench, who co-starred with her in the hit BBC period drama Cranford.

‘I can’t bear screeching of brakes and cars flying. I just can’t bear it.’

She moved to the capital from the Bahamas this summer, but Sir Sean Connery’s granddaughter is still shaken and stirred by London life.

And while most women dread the pitfalls of clambering out of vehicles in short skirts, Saskia — whose father, Stephane, was a stepson of the late James Bond star — turned a taxi into her private photo booth on a night out this week by posing in a £562 minidress.

Saskia Connery, 25, is particularly impressed with the London’s black cabs after moving to London from the Bahamas this summer

YOU just can’t get the staff . . . I hear Highclere Castle, where Downton Abbey was filmed, has cancelled all big events for the next six months because of staff shortages.

The sprawling Hampshire estate has become the latest business to be hit by the effects of the pandemic and Brexit. ‘In common with many other businesses, we can’t get enough part-time staff for the busy weekends ahead, so, sadly, as a result we have decided not to offer any large events for the next six months for fear we will not be able to staff them,’ confirms the stately home’s chatelaine, the Countess of Carnarvon. It would bring a tear to the eye of the costume drama’s butler, Carson. 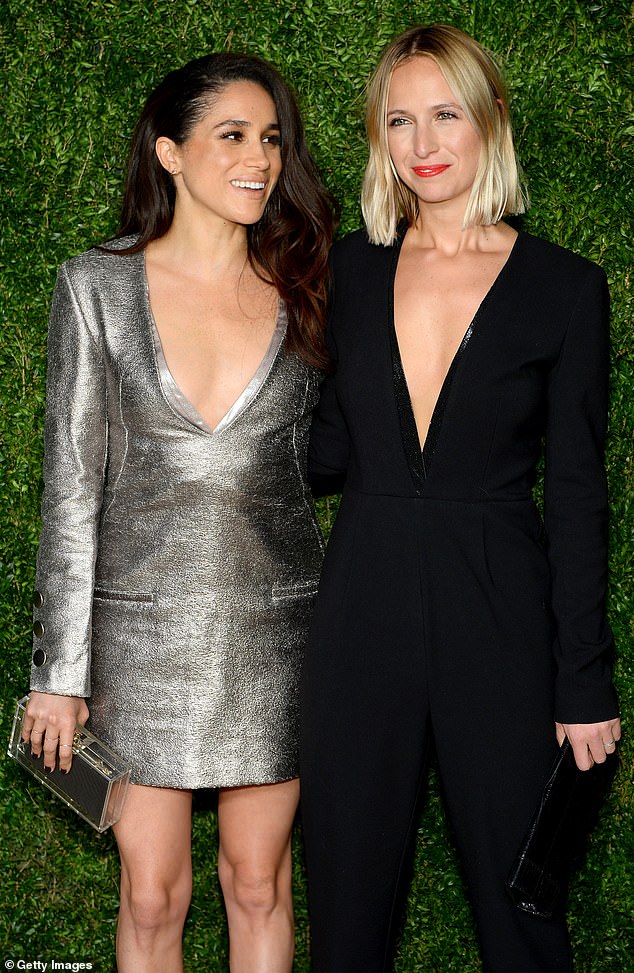 Misha Nonoo, pictured with Meghan Markle, says she was unable to hold her baby new Marina ‘for weeks’ after she was rushed to intensive care

The Duchess of Sussex’s close friend Misha Nonoo has revealed that the life of her baby daughter was saved by staff at a hospital in America.

‘She arrived while I was away from home and without any family around me,’ says the fashion designer, 36, who reportedly played matchmaker to Meghan and Prince Harry.

Misha says the baby, Marina, who arrived just weeks after the Duchess and Harry’s daughter Lilibet, was rushed to an intensive care unit and underwent surgery several times for an undisclosed condition.

‘I was unable to hold her for weeks,’ adds Misha.

Known as the ‘austerity Chancellor’, George Osborne let himself go with friends on a blow-out meal at a trendy restaurant near his Somerset home.

Osborne was joined by his fiancee, Thea Rogers, and six other friends including TV presenter Mariella Frostrup at the trendy Roth Bar and Grill.

Roth, where a fillet steak costs £38, is a favourite for locals in the area which has become a hotbed of stars, art dealers and internet billionaires.