GMB: Piers Morgan walks off after clash with Alex Beresford

Emily Maitlis, 50, is best known for presenting Newsnight but recently weighed in on a dramatic row on Good Morning Britain. Piers Morgan, 55, was challenged by Alex Beresford, 40, on his Meghan Markle comments during this morning’s show.

Emily voiced her own thoughts as she urged her followers to listen to Alex.

She tweeted to her 425,000 followers: “Forget piers walking off. Listen to Alex. He’s superb.”

The presenter then continued to clarify her comments in several other tweets.

She wrote: “Piers is my friend – supportive and outspoken. But this moment is about what Alex says. That’s all I mean.”

Emily also responded after a fan replied: “What’s important is the point he puts across but only about Harry dealing with walking behind the coffin but also the difference between the two brothers.”

She responded: “Exactly. Was very moved by that. It’s spot on.” 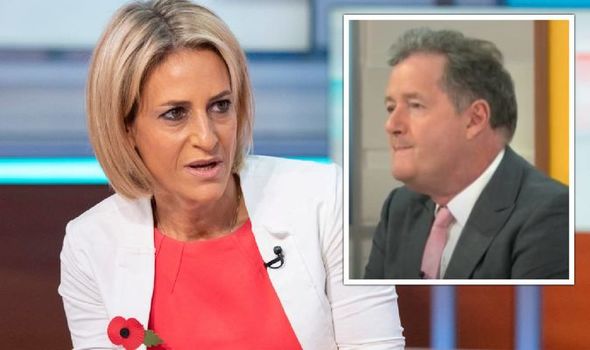 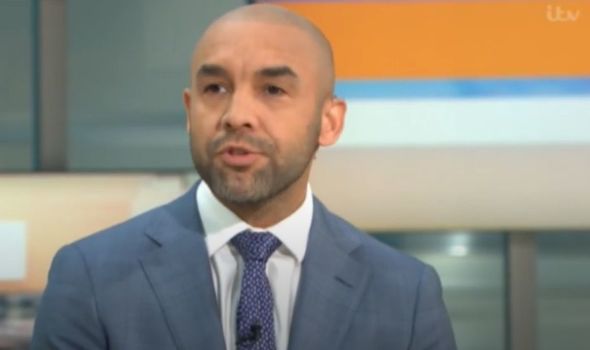 Alongside her insight, she shared a video that showed Piers walking off after Alex confronted him.

During the moment on GMB this morning, Alex shared his own views on the Meghan Markle and Prince Harry interview, which aired on ITV last night.

The pair were interviewed by Oprah Winfrey and shared their experiences with their mental health.

At one point, Meghan spoke about feeling suicidal after joining the Royal Family.

Piers came under pressure yesterday for saying he did not believe Meghan’s comments during the interview.

This led his GMB co-host Alex to challenge him on this before it all descended into chaos. 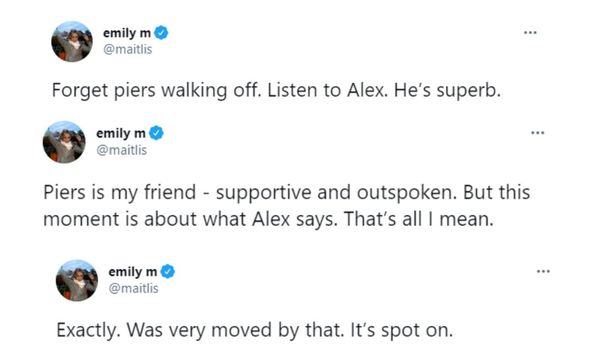 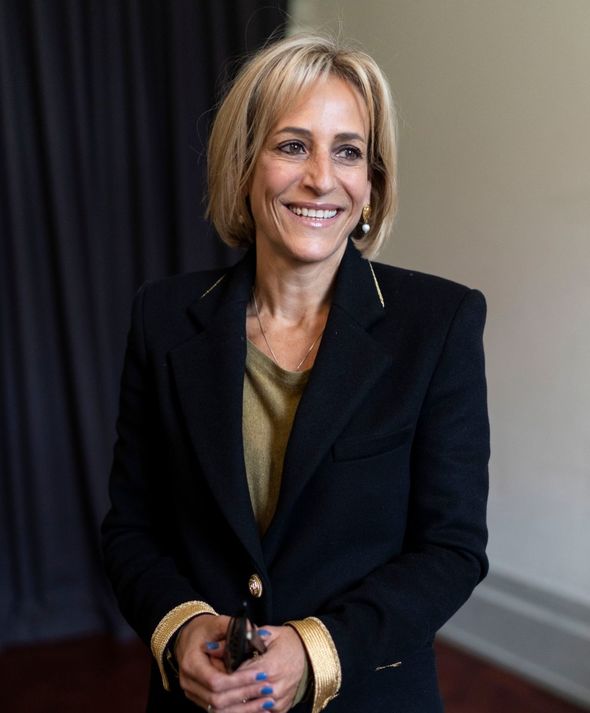 In the clip, Alex said: “I hear Piers say that William has gone through the same thing.

“But you know what, siblings experience tragedy in their life and one will be absolutely fine and brush it off and the other will not be able to deal with it so strongly.

“That’s clearly what has happened with Prince Harry in this situation. He walked behind his mother’s coffin at a tender age in front of the globe – that is going to shape a young boy for the rest of his life.

“So I think that we all need to take a step back. And I understand that you don’t like Meghan Markle.

“And I understand that you’ve got a personal relationship with Meghan Markle – or had one – and she cut you off.

“She’s entitled to cut you off if she wants to. Has she said anything about you since she cut you off?

“I don’t think she has but yet you continue to trash her.”

Piers interrupted saying: “Okay, I’m done with this,” before storming off the set.

Alex continued: “Do you know what? That’s pathetic. This is absolutely diabolical behaviour.

“I’m sorry, but Piers spouts off on a regular basis and we all have to sit there and listen – 6.30 to 7 o’clock yesterday was incredibly hard to watch.”

Many followers responded to Emily’s tweet with their own thoughts on the situation.

One wrote: “I reckon that is what got to Piers. He knows Alex Beresford generally speaks up when something is genuinely wrong and this time it was Piers behaviour that Alex highlighted.”

“I notice he is speaking out a lot more of late. Gone is the weather forecasts alone,” added another.

A third continued: “Next main presenter at @GMB? If he is, even I might watch it occasionally.”

Piers has already been on Twitter defending his behaviour as well.

He wrote: “I was annoyed, went for a little cool-down, and came back to finish the discussion.”

If you need to speak to someone, contact Mind.org.uk or call Samaritans for free on 116 123 or email [email protected]

Watch the full interview Meghan and Prince Harry interview on ITV on the ITV Hub, Courtesy of Harpo Productions/CBS.