Pete Davidson is undergoing a big makeover these days by removing all 100 of his tattoos. The comedian even addresses his tattoo removal in the new Glaceau Smartwater commercial he’s starring in. According to the Daily Mail, Davidson “couldn’t stop laughing” after he was offered the Smartwater campaign, which previously featured actors Gal Gadot and Jennifer Aniston.

In one part of the commercial, Davidson is seen getting some of his tattoos removed. He then says to the camera, “I’ve made a lot of questionable choices. And a couple of them need removing.” The “King of Staten Island” star is then shown making some of those “bad decisions” like attempting to model, awkwardly watching a sex scene with his mother, and riding a hoverboard at a restaurant.

While Davidson is capitalizing on his tattoo removal now, he admitted that the process is quite painful. “Not only are they like burning off your skin, but you’re wearing these big goggles so you can’t see anything,” he explained on “Late Night with Seth Meyers.” “The doctor’s in there with you. So before he goes to laser each tattoo, you have to hear him announce what the tattoo is to make sure if you want to keep it or not.” And when it comes to Davidson’s tattoos, the “SNL” star confessed that some are “really embarrassing.” Yet, the actor does have ways to go before he can get rid of them all.

Pete Davidson's tattoos will be gone when he's 30 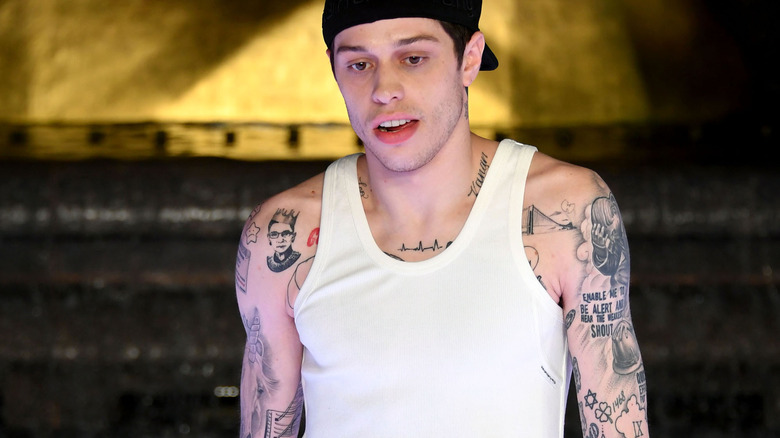 Pete Davidson is removing all 100 of his tattoos, which of course is a process that’ll take some time to complete. Ariana Grande’s ex revealed to People, “They said by the time I’m 30, they should all be gone. So they got like two more years left of this.” He also showed off how much he’s completed so far, saying, “It takes like a month for it to heal. But like it’s pretty much off this hand.”

If you’re wondering why Davidson wants his tattoos gone in the first place, it’s because of his budding film career. “I honestly never thought that I would get an opportunity to act and I love it a lot,” he told Seth Meyers in May. “It takes like three hours — you have to get there like three hours earlier — to cover all your tattoos. For some reason, people in movies, they don’t have them that much.” With his tattoos on the way out and the success of his first major film “King of Staten Island,” Davidson also may be ready to leave “SNL” after 7 years. He confessed to The Hollywood Reporter, “I’m surprised I made it to seven. I’m ready to hang up the jersey.”

Davidson’s suspected new girlfriend, “Bridgerton” star Phoebe Dynevor apparently is a fan of these changes since the two were recently seen canoodling at the Wimbledon Tennis Championships. With a new love, a promising film career, and even a tattoo-free look, it seems that Davidson is a new man!