When a group of bills known as SESTA/FOSTA was introduced in early 2018, it garnered widespread bipartisan support. The bills were intended to curb online sex trafficking, a goal that was easy for lawmakers to get behind, and one that few wanted to be seen actively opposing. One of the few dissenting votes was from Rep. Ro Khanna, a Democrat from California. In addition to his broader concerns about how SESTA/FOSTA could potentially chip away at free speech on the internet, he had received calls from sex workers in his district who had pleaded with him not to vote for the bills, arguing that they would negatively affect not just their ability to make a living, but their ability to protect themselves against predatory clients.

It was a risky vote for Khanna, who knew that he would potentially be subject to attack ads characterizing his opposition to SESTA/FOSTA as supporting human traffickers. But, as he tells Rolling Stone, “I believe as a progressive democrat our responsibility is to stand up to the most vulnerable members of the population.” As a group living on the margins of society with few if any legal protections, sex workers certainly fell in that category. Yet SESTA/FOSTA easily passed the House and the Senate, with only two votes against it in the Senate and 25 votes against it in the House, including Khanna’s.

As it turns out, Khanna’s concerns were valid. Many sex workers say that SESTA/FOSTA has significantly cut into their ability to make a living by preventing them from advertising, while also exposing them to increased risk. By removing the online safety networks they used to vet potential clients, they argue, SESTA/FOSTA has driven them into the streets, placing them at heightened risk of violence and sexual assault. Tamika Spellman, an advocacy associate with Helping Individual People Survive (HIPS), a harm-reduction organization in Washington D.C., estimates that there has been a 75 to 80% increase in the street-based sex work population in her city. She says that transgender sex workers and sex workers of color have been the most impacted by far by SESTA/FOSTA. “Transgender people have already been categorically disenfranchised. We don’t get jobs, and if we do there’s no advancement,” she says. “[When] you take away a platform they had to create an income for themselves and mitigate the safety hazards that come with sex work, you are purposefully putting people in harm’s way.”

Yet while there is plenty of anecdotal evidence suggesting that SESTA/FOSTA has harmed marginalized members of the population, there is little hard data to support that. Rep. Khanna, as well as numerous LGBTQ and sex workers’ rights organizations, are trying to change that. On Monday, Khanna introduced a bill calling for the National Institute of Health (NIH) to conduct a study on the effects of SESTA/FOSTA. Such a study will “establish the risks sex workers face on a day to day basis: the risk to violence, safety, dignity,” says Khanna. “And we’re actually gonna get data about that, as well as their economic security and status in society.”

The bill is a call for data, not a call for repeal. “Repeal would’ve made a statement but we wanted something that would have broader support and open a conversation that was broader than SESTA/FOSTA,” says Kate D’Adamo, a partner at the consulting collective Reframe Health and Justice, and a sex-workers’ rights activist who helped Rep. Khanna’s office craft the bill. Yet the bill is groundbreaking in that it is one of the first — if not the first — pieces of federal legislation to incorporate voices from members of the community. (LGBTQ groups like LAMBDA Legal and the National Center for Transgender Equality also worked with Khanna’s office on the bill.) “We finally had a legislator speak to our community and incorporate our input. That’s monumental. That’s never happened at the federal level before,” sats Doogan. 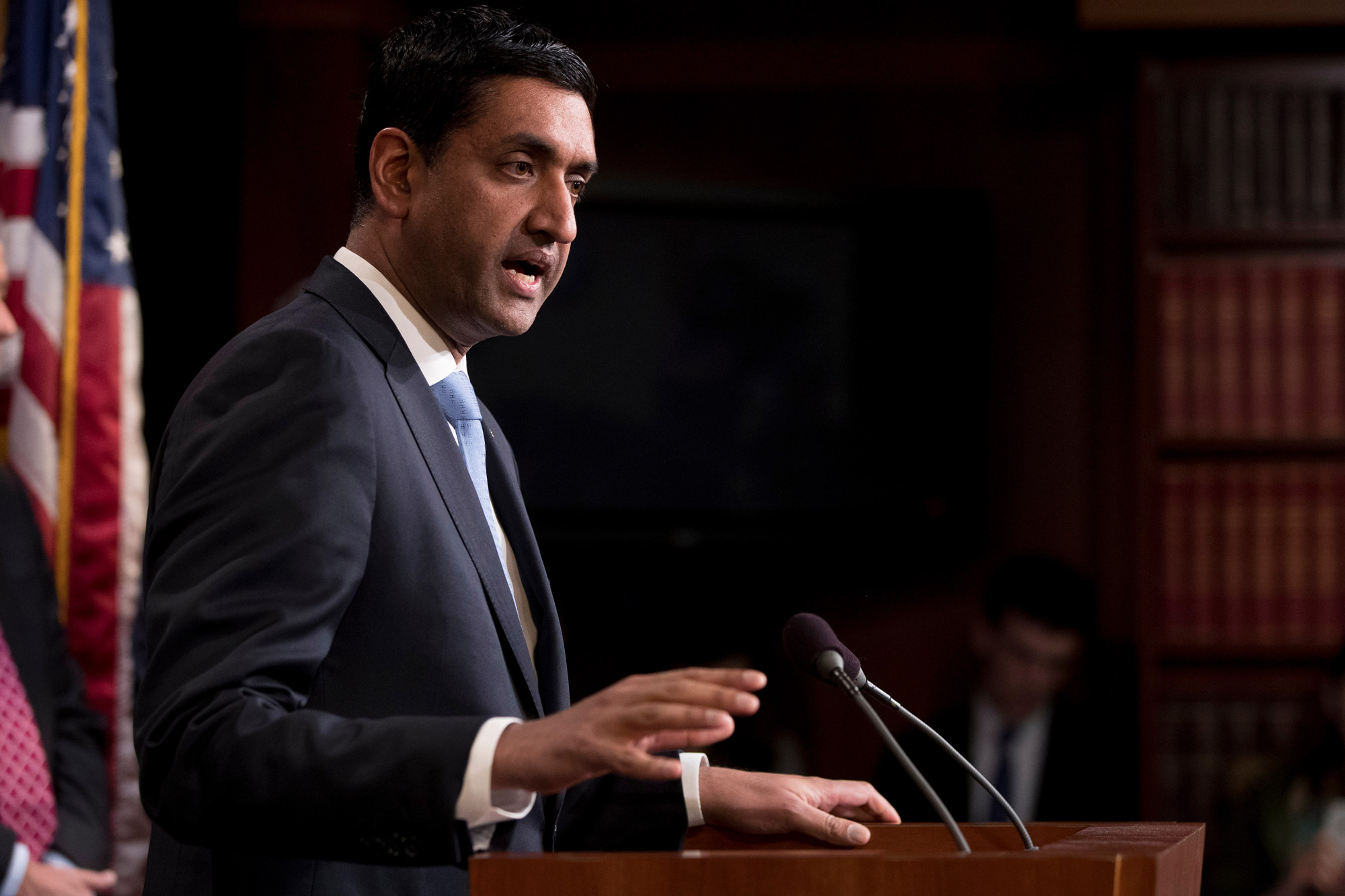 The bill is also significant for potentially providing a pathway to future legislation overturning SESTA/FOSTA, or even decriminalizing sex work altogether, Khanna says. “I think it’s gonna show that sex work decriminalization will lead to greater safety for both sex workers and the broader population,” he says, adding that empirical data about the harms of draconian legislation “will build support for” decriminalization.

The movement to decriminalize sex work has been gaining immense traction in recent years, and ironically, there’s an argument to be made that the harm wrought by SESTA/FOSTA has been crucial in pushing this conversation forward. “People on the ground calling [their representatives] about SESTA/FOSTA is really what got this moving,” says D’Adamo. Earlier this year, Democratic lawmakers in New York City introduced a bill to decriminalize sex work, while last October, D.C. council members heard a similar bill. A poll commissioned by Decrim NY, which sponsored the New York bill, indicated that 56% of Democratic voters would support full decriminalization of sex work, meaning that neither the buying nor selling of sex would be subject to prosecution. (This stands in contrast to the so-called “Nordic model,” which advocates for criminalizing clients who patronize sex workers, though not sex workers themselves; many sex workers argue that the Nordic model contributes to the stigmatization of sex work and does more harm than good.)

While the bills failed to move forward, they were seen as part of a growing conversation surrounding sex-workers’ rights, which has unfolded on the national stage as well. Younger generations of congresspeople, such as Rep. Ayanna Pressley (D-MA), have also come out speaking in support of decriminalization. And while few Democratic candidates have taken a firm stance on the issue, Democratic presidential candidates Bernie Sanders and Elizabeth Warren (who, as Senators, both voted for SESTA/FOSTA) have indicated they are open to the possibility of decriminalizing sex work, pending further research.

The fact that sex work has become a talking point leading up to the 2020 election at all indicates how many advances the movement has made, which is all the more impressive given that it’s almost exclusively grassroots. “There’s no lobbyists for sex-worker rights, there’s no federal funding for lobbying to this day,” says D’Adamo, who has spent years taking meetings with various politicians on the Hill to bring the issue to the forefront. “When people are mostly underpaid, unfounded activists on the ground, getting involved in the federal landscape is so difficult.”

Theoretically, a study calling to assess the effects of a piece of legislation should prove non-controversial. Yet given the highly charged conversation surrounding sex work, as well as the bipartisan support for SESTA/FOSTA when it first passed, Khanna anticipates that it likely will be. “It’s gonna be a fight. Even to get a study and factual evidence on the impact [of SESTA/FOSTA], there will be a fight,” he says. SESTA/FOSTA supporters are “afraid of being labeled soft on trafficking and not cracking down on predators.”

Yet given the growing support for the sex workers’ rights movement, he believes calling for the study is a necessary first step toward not just the larger goal of decriminalization, but opening up the conversation surrounding sex work as a whole and urging people to consider the consequences of even well-intended legislation — especially considering how dire these consequences have been. “I have been in this industry a long time, and the level of violence I’m seeing is unfathomable. I had people calling saying they’re on the streets and [they] got beaten their first night. It is just one story after another,” says Kristen D’Angelo, the head of the Sex Workers’ Outreach Project (SWOP) Sacramento.