Just two months after getting engaged on The Bachelorette, a source confirmed to E! News that Gabby Windey and Erich Schwer have called it quits. Additional intel from a second source—this one with ties to Bachelor Nation—added that it was actually Gabby who ended things earlier this week.

“She felt they weren’t aligned and weren’t on the same page,” the insider dished. “Gabby was hoping they could give each other space and work it out but ultimately decided they didn’t have a future.”

Fans everywhere were already in the midst of speculating whether anything had gone down between the former couple when Erich was noticeably absent from Gabby’s Monday night Dancing With the Stars performance—well, both him *and* her engagement 💍. “I think life is just really busy for the both of us right now, so I understand [people’s] concern,” the ICU nurse told Fox News Digital when asked about the status of her relationship. “We’re just kind of, you know, going forward with each of our individual interests and supporting each other from afar,” she concluded.

A lil refresher: Gabby and Erich got engaged on the season 19 finale after a conversation during which the real estate analyst expressed that he’d initially been a bit hesitant to pop the question. After the proposal, however, the whole world kind of felt a sense of relief since Gabby seemed to get her happy ending, plus (!!) Erich was also grandpa approved, which 😭😭. 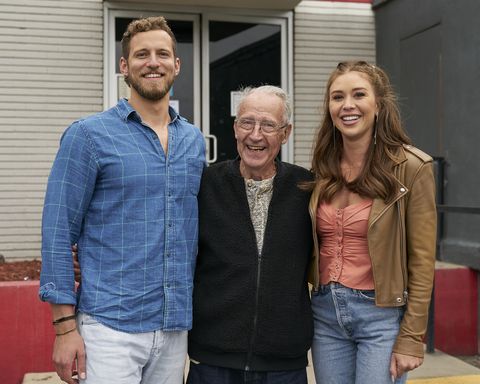 However, shortly after the finale, Erich faced a slew of backlash after a photo of him wearing blackface in his high school yearbook surfaced on social media. Of the pic, Gabby admitted, “I was incredibly shocked. [I] just really had to process my thoughts and then think about how we can grow as a couple and learn from this.”

But the drama had been brewing before that: In mid-September, Erich’s ex-girlfriend Amanda Kaylor shared text messages allegedly between the two of them, where Erich confessed that The Bachelorette was not “real” and that he was only doing it to see if “there was something else [he] could do with [his] life.”

In an interview with People, Gabby explained that Erich actually warned her about the messages ahead of time since he was “scared they were going to leak.” She said, “Ultimately it was a time for us to take a step back and reflect on our relationship and see if we can get through this. You have to really lead on your communication, be really honest with each other while having these tough conversations.”

Honestly? Justice for Gabby at this point!