So about those Kylie Jenner engagement rumors swirling around at the moment, all supposedly thanks to her 12-year-old nephew Mason Disick? We hate to break it to fans, but Kourtney Kardashian is making it clear that it is nothing but gossip from a fake social media account pretending to be her son.

In case you missed it, people started going wild after an Instagram account claiming to belong to Mason shared a series of posts on Thursday, claiming the makeup mogul and Travis Scott are getting hitched soon. The page specifically posted a video from Kylie’s TikTok where she’s surrounded by her sisters Khloé Kardashian and Kim Kardashian and friends while wearing a white dress last night. Take a look (below):

While it seemed like a normal girl’s night out, the social media user claimed in the caption of the clip that they were actually together for a “bridal party!” They wrote:

“Hey guys! Mason here you’re favorite person LOL. Here’s an update on life. Kylie is getting married and is currently on her bridal party that’s why she’s the only one wearing white!!!”

Taking it a step further, the person even included a screenshot of someone from their phone saved under “Kylie Jenner” calling them. They also had text messages allegedly from the 24-year-old reality star, saying “you need to stop,” “delete that now,” and “MASON.”

But before anyone freaks out over this rumored engagement, you should know it is just that … rumors! In fact, Kourtney took a moment to address the chatter today and clarified her son had absolutely nothing to with it (or anything else coming out of these “creepy” accounts purporting to be the preteen). She wrote on Instagram Stories and Twitter:

“To any and all ‘news’ outlets who use that false account as a source, you know better. Stop using it for the benefit of your slow ‘news’ day please and thank you. And to the person relentlessly pretending to be Mason, ultra ultra ultra creepy!!!!!” 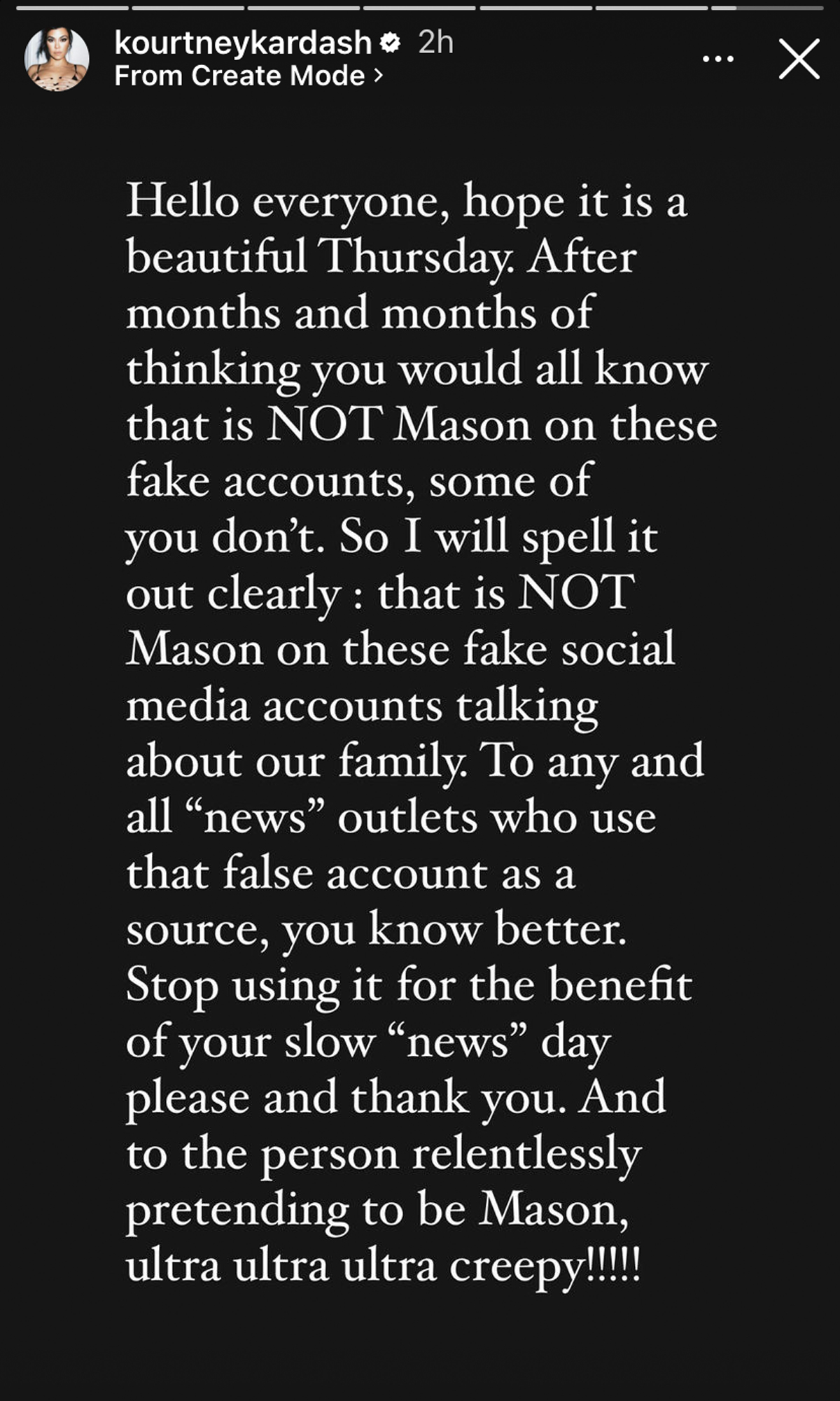 This is not the first time that someone has pretended to be Scott Disick‘s oldest son on social media to stir up whispers about the KarJenners, and even though it super disturbing that people are posing as a minor, we can imagine this sadly won’t be last time. Thoughts, Perezcious readers?