Meghan McCain revealed to her co-hosts and millions of viewers that after four years, she is leaving ABC’s The View. The announcement prompted her fellow hosts to sing her praises.

In her farewell message on July 1, McCain shared how her departure was no “easy decision” and how much she looks forward to time with her husband and daughter Liberty. “It took a lot of thought and counsel and prayer, and talking to my family and my close friends, and, you know, look — COVID has changed the world for all of us and it changed the way, at least for me, the way I am looking at life, the way I’m living my life, the way I want my life to look like,” said McCain. The host revealed that after moving to Washington D.C. full time due to COVID-19, she realized just how much she wanted to have her family permanently in the nation’s Capitol, which meant leaving “The View.”

McCain stuck out on “The View” as the young Republican voice, prompting many arguments with her co-hosts. Yet, in the moment of McCain’s announcement, Whoopi Goldberg, Sunny Hostin, Sara Haines, and even Joy Behar gave sweet farewells to the host. Keep on reading for Behar’s full message. 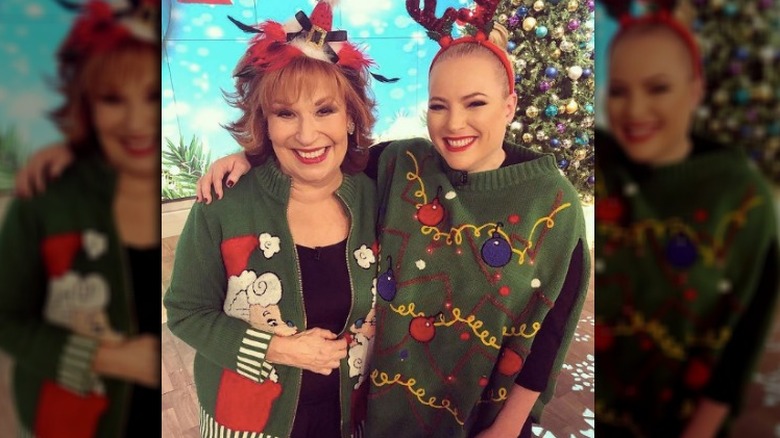 Although Meghan McCain often went head-to-head with all of her co-hosts during her four seasons on “The View,” it was her frequent fights with Joy Behar that often made headlines. Despite the on-screen bickering, when it came time to bid a farewell to McCain, who will leave “The View” at the end of July, Behar found the silver lining and revealed the similarities she and McCain shared.

“You and I have had our disagreements,” began Behar. “We’ve had our fights, we also had some drinking moments which were rather fun and interesting. I have to say that what we have in common — as do all of us here — is that we’re on a show where we stick our necks out, we take the blowback. We take a lot of hits on this show and we stick to our points of view. You have done that brilliantly for four years.”

The talk show host continued, telling McCain “I really, really appreciated the fact that you were a formidable opponent in many ways, and that you spoke your mind — and you’re no snowflake, missy.”