Wondering why Kendall Jenner and Devin Booker broke up? Truly same. But here’s what we do know: according to an Us Weekly source, Kendall and Devin decided to split after attending Kourtney Kardashian and Travis Barker’s wedding in Italy.

The source explained that Devin and Kendall want to “figure out if a future together is what’s meant to be” and apparently will “take this time to focus on themselves.” Noted!

“Kourtney’s wedding really put things into perspective,” the source said, adding that the former couple are “still super amicable and supportive of each other.” 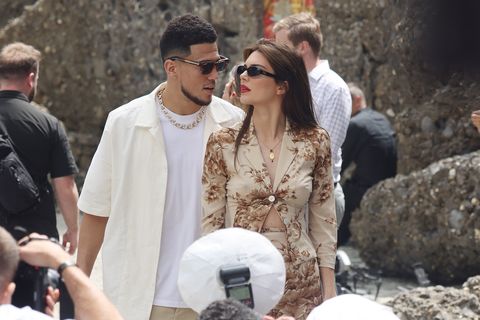 Another insider previously noted that Kendall and Devin have “been apart for over two weeks now,” so it sounds like this breakup went down sometime in early June? And FYI, Entertainment Tonight (who broke news of Devin and Kendall’s split) also spoke to a source who mused “Kendall feels like they’re on different paths” and said she and Devin “have had discussions about their future but they are not on the same page.”

Kendall hasn’t commented on her breakup, and likely won’t considering she’s known for keeping relationships super private. As she explained on the KUWTK reunion, “No offense to my older sisters at all, but I think that Kylie and I specifically have had the opportunity to watch our older sisters go through marriages and relationships and breakups and do them pretty publicly. It was a personal preference from a really young age.…I think it makes my life a lot easier and our relationship a lot better, to be honest. I just feel like it’s a private matter and not for anybody else to judge or know.”