Angelina Jolie and Brad Pitt’s son Knox made a rare solo outing as he headed to a martial arts class in Los Angeles on Oct. 2

Knox Jolie-Pitt, 13, looked so grown up as he headed to a martial arts practice! Angelina Jolie and Brad Pitt‘s son was wearing a black robe and pants in Los Angeles on Oct. 3, making a rare public outing without his Oscar winning mom. The teenager, who is the twin of sister Vivienne Jolie-Pitt, also 13, also sported a protective black face mask due to COVID-19. Knox appeared to be accompanied by a brunette woman in a blue denim dress.

Knox, who is a mini-me of his handsome dad Brad Pitt, was last spotted out with mom Angelina in New York City. The Lara Croft: Tomb Raider star was in the Big Apple shortly after she celebrated her 46th birthday with kids Pax, 17, Zahara, 16, Shiloh, 14, and the twins. Knox bonded with Angelina over a lunch date at trendy the trendy Momofuku Noodle Bar in Manhattan alongside Pax. 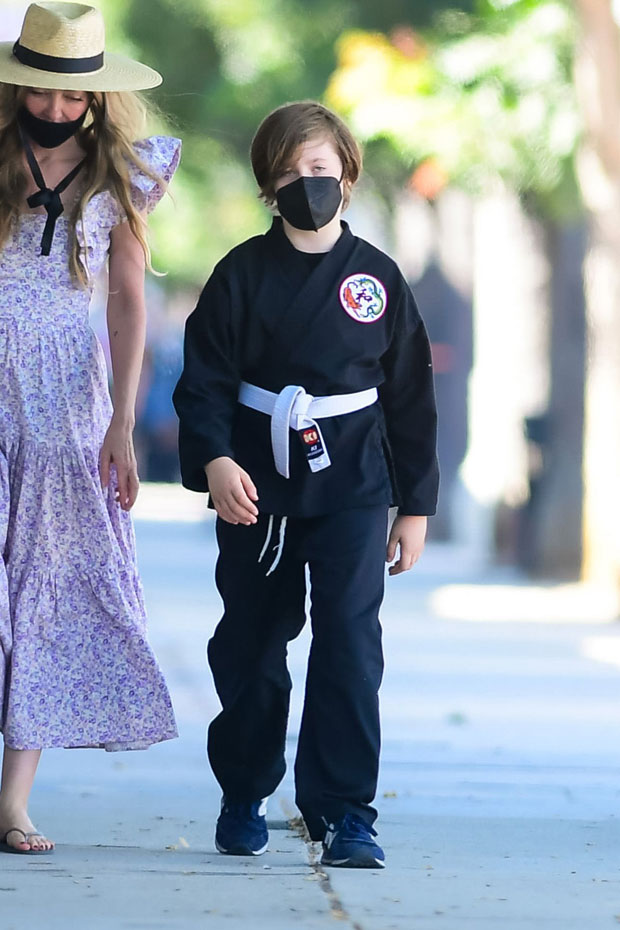 The 13-year-old remains part of the ongoing divorce and custody battle between Brad and Angelina, which began after the high profile couple’s split in Sept. 2016. Beyond the custody component of their legal case, it also recently came to light that the Ocean’s 11 actor and Angelina are over also fighting over Château Miraval, which is the $164 million vineyard that they co-own in France. The vineyard notably produces the popular Miraval rosé wine.

Angelina recently confessed that she “feared” for the safety of her kids during her lengthy relationship with Brad. “I’m not the kind of person who makes decisions like the decisions I had to make lightly. It took a lot for me to be in a position where I felt I had to separate from the father of my children,” she said to the Guardian, making it clear there was a “lot” she could not say due to legal reasons. “Often you cannot recognize something in a personal way, especially if your focus is on the greatest global injustices, because everything else seems smaller. It’s so hard. I’d like to be able to have this discussion and it’s so important,” Angelina said.