“#911 … Neither here nor there, but just think: If you were born on that terrible day, tonight is your last night of being jailbait anywhere in this country”

Yep, those words were tweeted out from Lenny Dykstra‘s verified Twitter account the day before the 18th anniversary of the September 11 attacks.

Yeah, that’s bad … yet somehow, it was made even worse because the tweet included a map of the U.S. showing the age of consent in each of the 50 states. 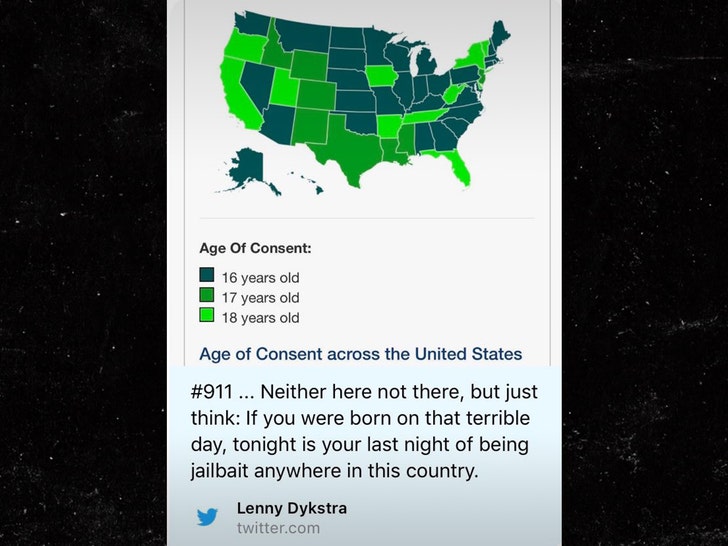 But, the ex-MLB slugger INSISTS his fingers were not responsible for typing those words — instead, blaming the whole thing on his “college-student intern.”

Of course, there was blowback from some rightfully offended people … so Dykstra went back to Twitter to try and explain his way out of this.

“The college-student intern responsible for the tweet about age of consent and 18 years since 9/11 is going to be taking a break to focus on schoolwork,” Dykstra said.

“I had indeed mentioned to her how quickly time had flown by. She meant no harm and will learn from the experience.”

The only issue is … Lenny stuck to his guns and defended the tweet all day Wednesday (unless his intern was VERY passionate about the topic) … firing back at the “fake outrage” he was getting.

“No one cares about the ‘how many years have passed so quickly’ thing when it’s just some ordinary August 23rd or whatever.”

“And if u have a problem with 18 years old having sex, make a push to change the law. But I’m guessing so many of the middle-aged men showing their ‘outrage’ now would much rather sleep with someone born 9/11/01 (or, in a few hours, 9/12/01) than someone born the same day as them.”

A bit of advice, Lenny … a simple “#NeverForget” will suffice next year.