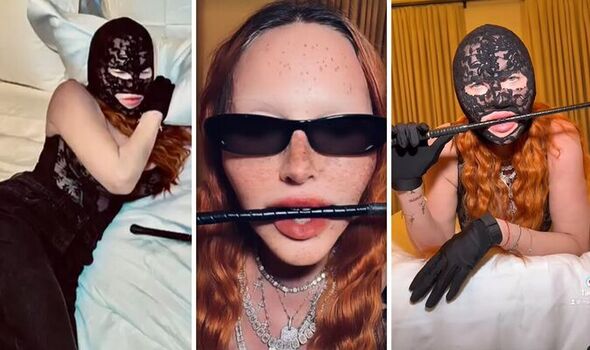 Madonna left her fans concerned as she shared a new selection of raunchy snaps which saw her bite down on a whip while wearing a lace balaclava.

Madonna, 64, has shared yet another collection of raunchy photoshoots, this time brandishing a horse whip while wearing a lace balaclava.

In the captions across the pictures, the singer wrote: “Baby wants to ride. So high. For love. Now I lay me down to sleep. I pray the lord. My soul to keep.”

Many fans were left unimpressed by Madonna’s racy snaps, including Janet who wrote: “What are you doing??!! You are an amazing singer and you don’t need to be doing all of this! It’s making you look old and desperate for attention….please stop! You’re ruining your beauty!!!” (sic)

While Suhaila begged: “Listen to your fans – be yourself not this.”

However, some did jump to Madonna’s defence and told critics to ignore the 64-year-old if they don’t like her.

Debra stated: “Complaining about Madonna yet you’re still here…scroll if you don’t like it.”

Madonna held a whip between her teeth as she told fans: “Baby wants to ride”

Madonna photographed herself biting down on the black whip as she wore dark black sunglasses and her red hair falling loose.

Madonna placed her hands around her neck as she continued: “So high.”

Madonna prompted fans to beg her to “please stop” as she shared her latest slew of racy snaps.

Madonna wore silver necklaces around her neck for the photoshoot

Madonna posed with her eyes closed as she showed fans her black gloves and silver necklaces.

Madonna then donned a lace balaclava and lay on a bed

Madonna lay on a bed with her whip placed next to her as she wore a lace balaclava with a matching black bodysuit and trousers.

Madonna, 64, showed off her flexibility

Madonna then kicked her leg high in the air as she lay on the bed and added the caption: “I pray the lord.”

Madonna brandished her whip and showed off her silver grills

Madonna lay forward on the duvet while holding her black whip. Only her bright blue eyes could be seen through the holes in the balaclava, as well as the silver grills that she regularly wears over her teeth.

Madonna writhed around in her bondage gear as she continued to bite down on the whip for the eye-popping snaps.