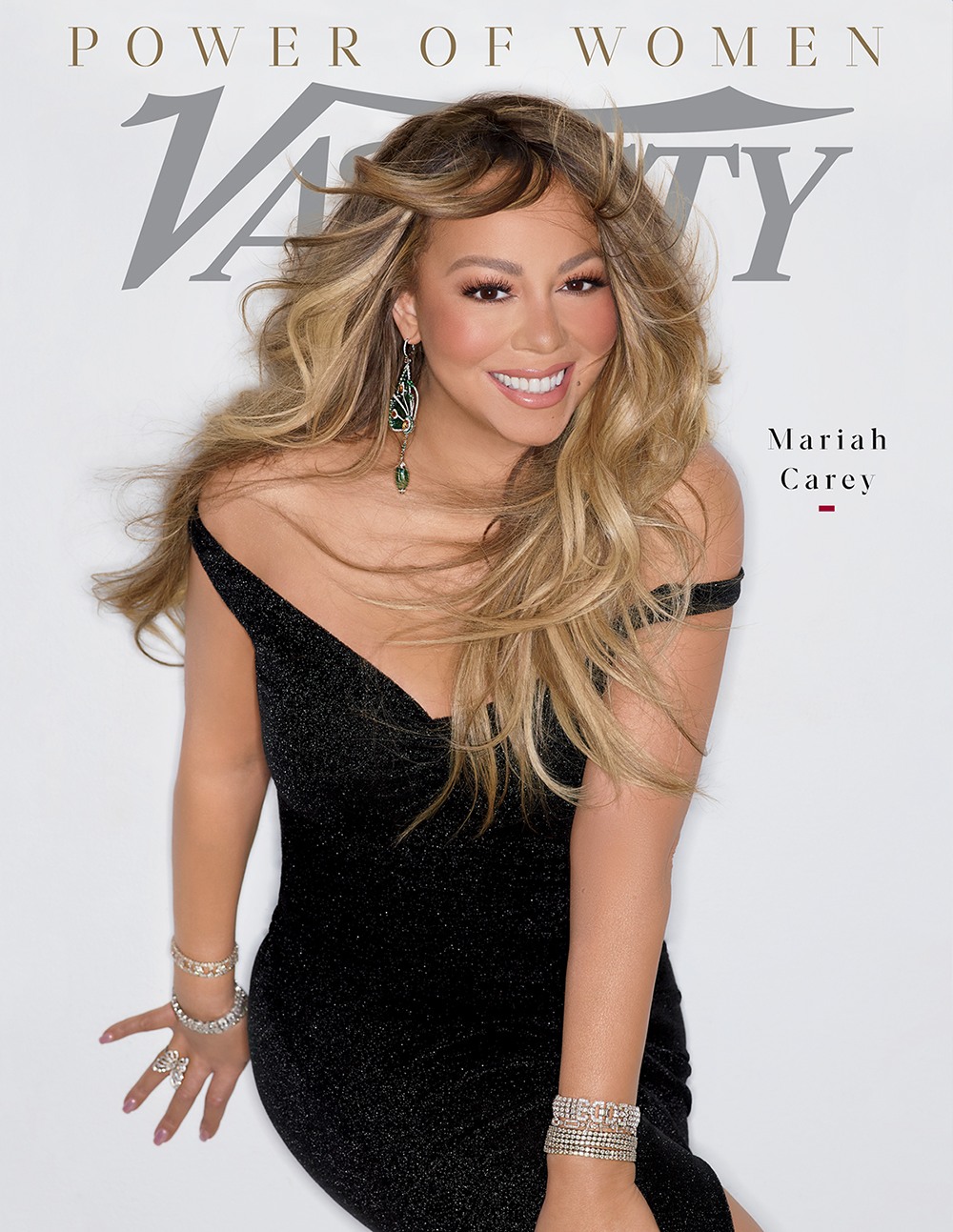 Mariah Carey is one of multiple covers for the latest issue of Variety. She seems to be promoting her still-being-written memoir, or maybe she’s just promoting her music, her life, herself. In any case, it’s a new Mariah interview and it is PERFECT. Allow Variety to set the perfect scene for the interview:

As we walk into her dressing room, Carey has refashioned this corner of the photo studio into her own private lounge. On a table, she’s displayed a scented candle and a lamp. “I just hate fluorescent lighting,” she says. “It’s toxic.” She sips on a glass of red wine and nibbles from a container of pumpkin seeds. After she puts on a robe, she feels shy, so she asks a member of her team to bring her a second robe to wear over that one. “I just need a little coverage, because we’re a little nude under her,” Carey says, talking about herself in the first-person plural. “Lord knows, dreams are hard to follow.”

Are you already laughing? Because I am. The actual interview is very good too – funny, sad, self-aware, and typical Mariah. Some highlights:

Where she is creatively at the end of the summer: “Getting ready for Christmas. Yes, but I can’t skip Halloween, and I can’t skip Thanksgiving. I know that “All I Want for Christmas,” my song that I wrote, is very commercial. But it’s not coming from that place. It’s really coming from the place of a kid, just loving Christmas so much. There’s just no greater feeling or emotion than having that day. And everybody asks me what the secret behind [my song is], and I’m, like, it’s because I truly love Christmas. I don’t want to say it, but I might as well work in the North Pole. I legitimately have that much Christmas spirit.

Her image: “They’ve been worried — “they” in quotes — about my image since 1901. That’s my way of saying a long time without stating an actual year. But no, since the beginning. And, like, I had to keep my hair a specific way, and I had to be very, very down the middle. I had a whole supposed breakdown, alleged.”

The alleged breakdown: “It was an emotional and physical breakdown, but it wasn’t a nervous breakdown, because you don’t recover from that really. And even my therapist was like, “You didn’t have a breakdown; you had a diva fit and people couldn’t handle it.” And that is something we should explore, because if a woman gets too emotional or too loud or too abrasive or too real, suddenly it’s like, “What’s wrong with her? She’s crazy.”…And the minute I was like, “I’m not fine; I need a day off, I need a moment.” Nobody could handle it because they infantilized me from the beginning. And by the way, I do need someone to be like, “Ok, we’ve got to go; you’re running late.” Yeah, I am like a petulant child. But my true fans know this. I’m eternally 12. But we’re artists.”

Justice for Glitter: “After the debacle that was “Glitter,” which everybody can read about in the book, because it’s a real moment we’re getting into. And by the way, #JusticeforGlitter with my fans. I hope you include that if we talk about it, because the album went to No. 1 this year. That was a huge achievement for [my fans] the Lambs, who by the way named themselves. I did not name my fans, and I think it’s insulting that other people have named their fans. But whatever; we love everybody.

Her biracial identity: “When I was growing up, for me, it was very much: “You’re one or the other. Which are you?” And it’s very wrong to do that to a kid. And that message is a message that many racist people start feeding their children when they’re babies, so the hate gets handed down. And it’s a real thing. When you’re so nebulous looking or ambiguous looking, people tend to forget, “Oh yeah, her father’s black. Maybe I shouldn’t say this to her.” And in my situation, I’ve always felt so alienated. Even in “Vision of Love,” it says “suffered from alienation.” That’s my first song I ever put out. That means I felt like an outsider. I felt like people didn’t get it and it was hard.

I like when Mariah talks about her biracial identity and how she’s had to reclaim it over the years, because the youths really don’t understand: when Mariah first came around, no one knew what she was or what “box” to put her in, and she was very heavily marketed to white audiences who didn’t want to think about her racial identity. 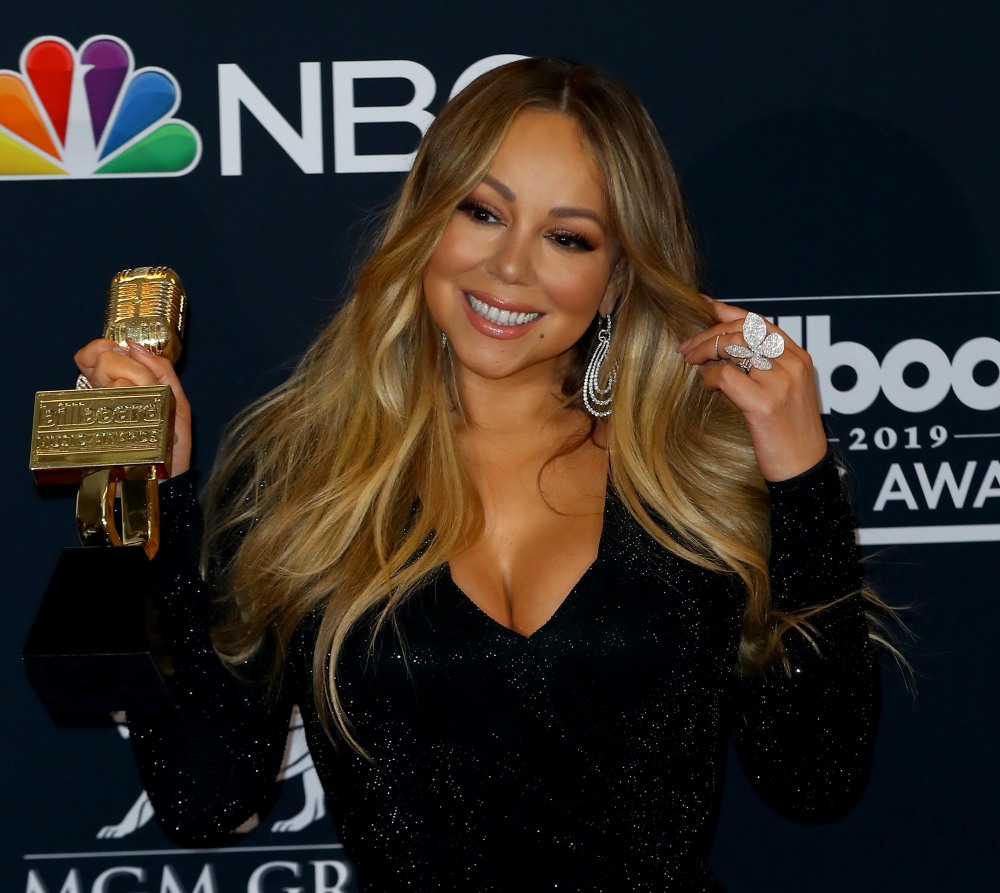