The royal family is the gift that keeps on giving, and there’s rarely a day when the regal crew isn’t in the news cycle. It’s no surprise, then, that Lifetime is back with the third installment in its popular “Harry & Meghan” series. Premiering on Labor Day, “Harry & Meghan: Escaping the Palace” tracks the Duke and Duchess of Sussex’s lives over the last three years, from announcing their decision to step down as senior royals, to moving to Los Angeles to start a new life.

Prince Harry’s relationship with his brother, Prince William, has been well-documented by the press, particularly as the pair allegedly don’t see eye to eye on a number of key issues, including Harry’s wife, Meghan Markle. “Harry & Meghan: Escaping the Palace” explores the heartbreaking feud between the princes and takes a fictional look at their sibling rivalry. While no one can be 100% sure of what really took place between William and Harry, the movie’s executive producers Michele Weiss and Merideth Finn are eagle-eyed royal watchers who wanted the film to piece together as much of the story as possible.

Nicki Swift sat down with Weiss and Finn to find out what it was like recreating Prince Harry and Prince William’s royal feud for the screen, and whether either brother is portrayed as a villain in the movie.

The executive producers aren't taking sides in the royal feud 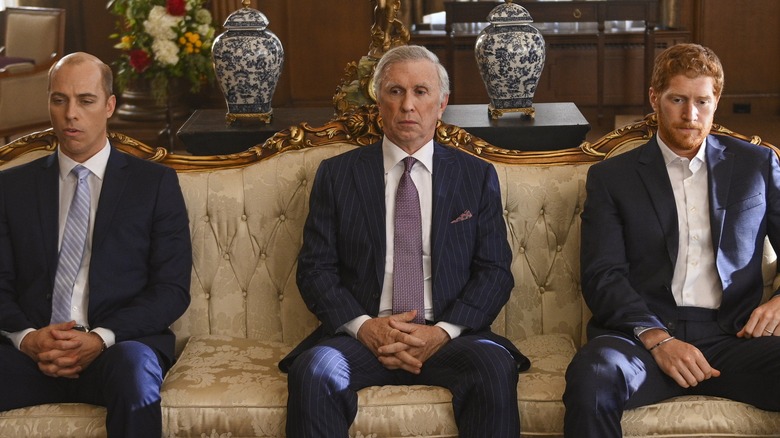 “Harry & Meghan: Escaping the Palace” attempts to recreate some of the tense conversations that may have taken place between Prince William and Prince Harry behind closed doors. “Our goal was to try to present both sides. Two people with different roles to play, and different histories,” executive producer Michele Weiss explained to Nicki Swift. “And we’re empathetic to the position that William is in. He is the one who’s carrying the weight of monarchy on his shoulders. And he’s had a role to play his whole life, and he doesn’t have a choice in that role, really.”

“Obviously it’s a drama, you want to see the conflict,” Weiss continued, “but we did try to show both sides, and to show that both of these brothers are, as they say at one point, William needs to protect the monarchy and we need to protect our family, and it can pit them against each other — or their purposes against each other. But we’re fans of Will, as well.”

Fellow executive producer Merideth Finn also explained, “I would agree that we don’t see him as a villain, if there is a villain. And in every good movie there’s conflict, so we really saw the villains as the press, and as the Firm, the sort of management. … The machine.”

“Harry & Meghan: Escaping the Palace” is available to watch on Lifetime.