Rita Ora was in good spirits as she partied with husband Taika Waititi and friends at Nick Grimshaw’s house ahead of Christmas Day.

The singer, 32, arrived in a pink coat and clutched a present wrapped in the same coloured wrapping paper before posing in front of the Christmas tree draped in glistening silver tinsel with Nick, 38, and his dancer boyfriend Meshach Henry, 25.

Radio DJ Nick, Rita and her filmmaker husband Taika, 47, could be seen posing together with their friends, with Rita looking stylish in a black top with cut out detail. Festive spirit: Rita Ora, 32, was in good spirits as she partied with husband Taika Waititi, 47, and friends at Nick Grimshaw’s house ahead of Christmas Day (Rita, left, is seen with Nick, second right, and his boyfriend Meshach Henry, right)

Taika, who married Rita at an intimate ceremony in London this summer, cut a casual figure in a black bomber jacket for his evening out.

Posting the pictures on Instagram on Christmas Eve, Nick wrote: ‘Tis the season! Merry Christmas everyone!’

Rita gave fans an insight into how she spends her free time with husband Taika this week as she shared a clip of the pair testing out social media filters this week. 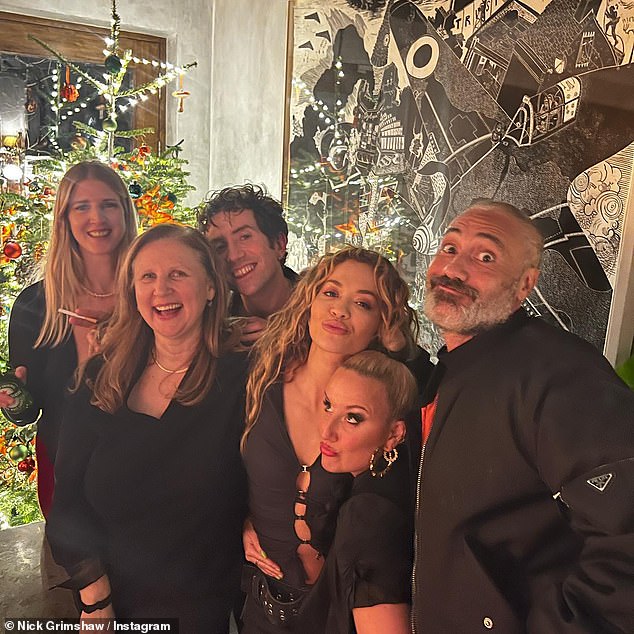 Pals: Radio DJ Nick (third right), Rita (centre) and her filmmaker husband Taika, 47 (right), could be seen posing together with their friends

As they posed, gradually the filters turned them into several characters with Rita ending the video by smiling and winking.

The loved-up couple giggled as they tested out the TikTok effects and made a series of different expressions. 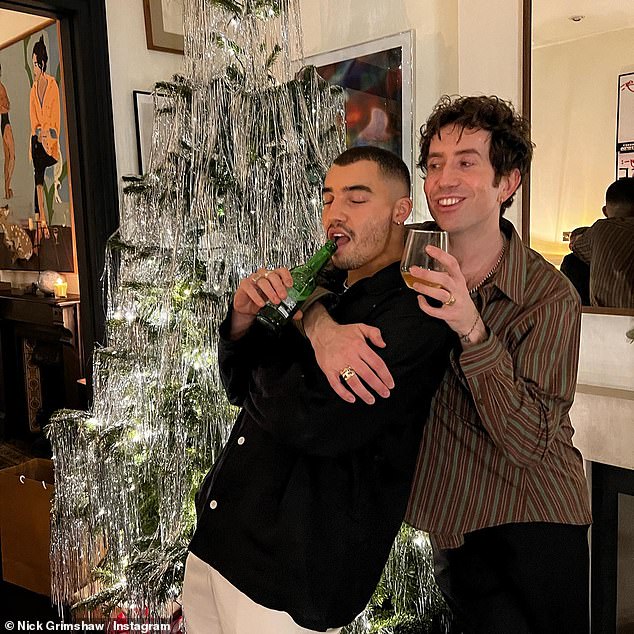 Loved-up: Nick (right) wore a brown striped shirt and black trousers as he stood with his arm around boyfriend Meshach 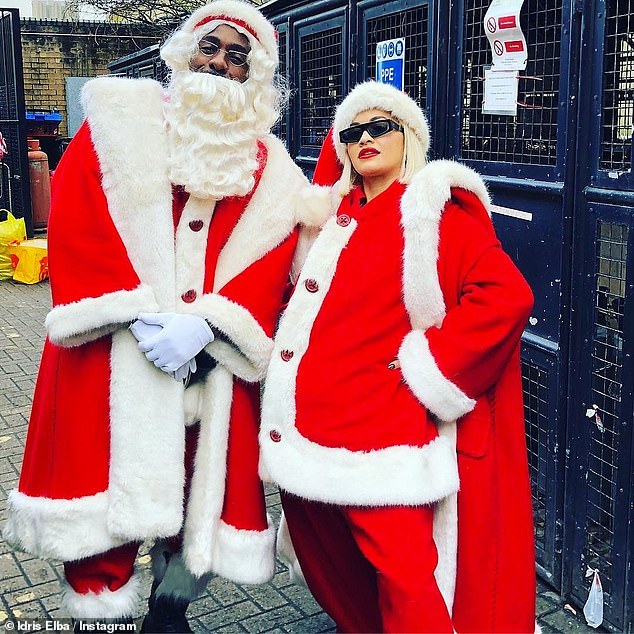 Funny: Earlier on Christmas Eve, actor Idris Elba, 50 shared a snap on Instagram of Rita dressed as Santa as the pair posed together for a festive picture

The couple’s hijinks comes after Rita’s husband Taika revealed that actor Robert Pattinson played matchmaker in their relationship – introducing them to each other at a BBQ where they became friends.

The director, who married the singer earlier this year, said he knew Miss Ora for three years before their friendship blossomed into romance and they began dating in 2021.

Speaking on Louis Theroux’s Interviews series, Waititi said that he and Miss Ora’s relationship works because they were ‘best friends’ first.

Stylish: It comes after a braless Rita wore a sexy cut-out purple number as she joked around with director husband Taika while testing out TikTok filters on Tuesday night 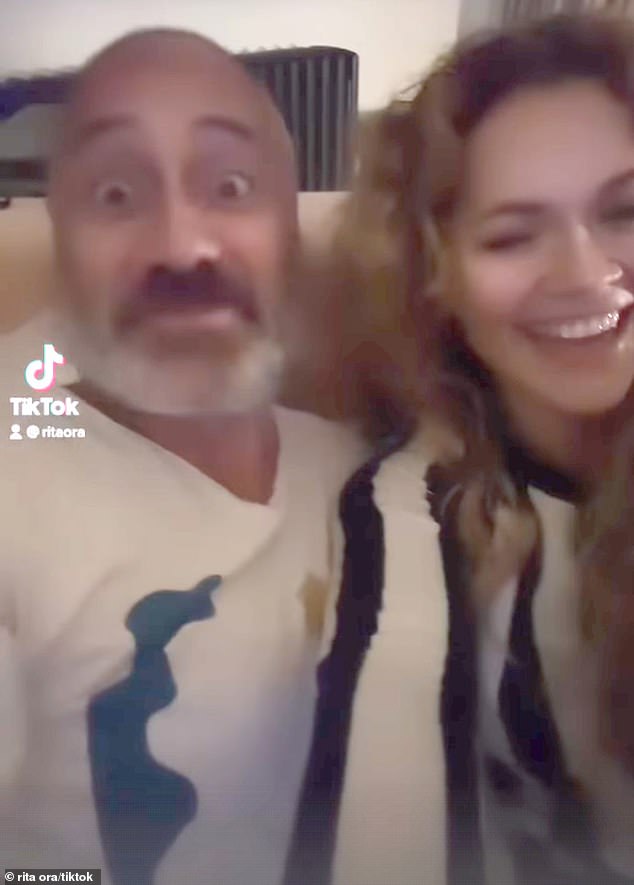 Husband and wife: Rita joked around with her husband as they relaxed at home and tested out social media filters together 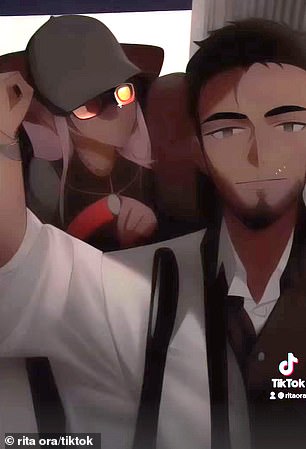 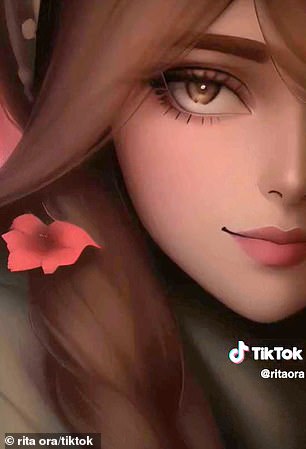 Joking around: The couple’s fun saw them playing around with different TikTok filters and becoming different characters

Asked about their first meeting, Waititi told Theroux: ‘We’ve actually known each other for years, before we got together.

‘Everyone thinks we met in Australia last year. You know who brought her to my house? Rob Pattinson. He brought her over.

‘I was having a little BBQ and we just got chatting, we hit it off, became friends. Then for the next three-and-a-half years we were just good mates. 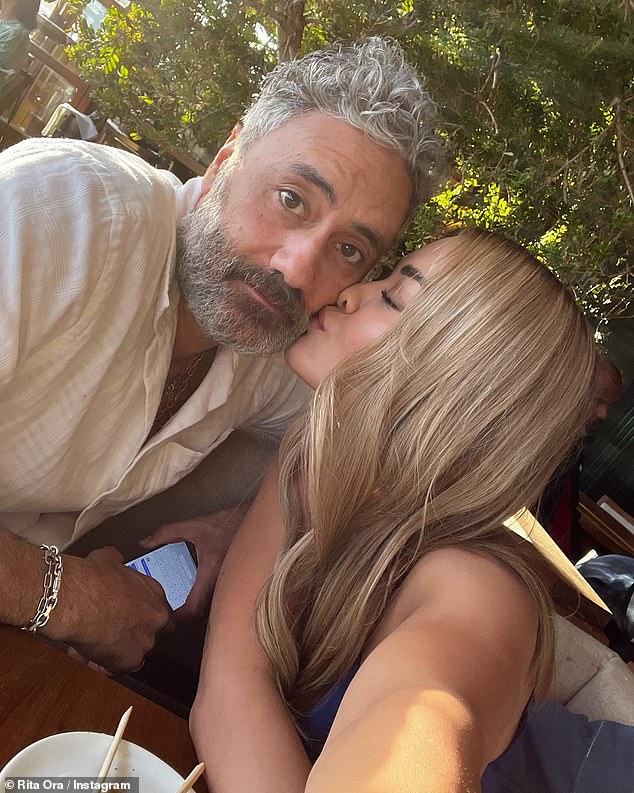 Marital bliss: Taika recently revealed that actor Robert Pattinson played matchmaker by introducing him and Rita for the first time

‘We were in different relationships, and every time we hung out, we would just catch up where we left off, and it was a good friendship, and we decided to ruin it all.

‘I just like the fact that we work hard, and we’ve both got our own jobs and independent, but are also best friends.

‘We come from different parts of the world, she’s from Kosovo and I’m from New Zealand. They’re very far away but our backgrounds were quite similar.

‘We both grew up poor in working-class families, her dad owned pubs and she hung out in pubs a lot when she was a kid and my mum worked in pubs and a lot of my family enjoy being in pubs so I was in pubs a lot as a kid. 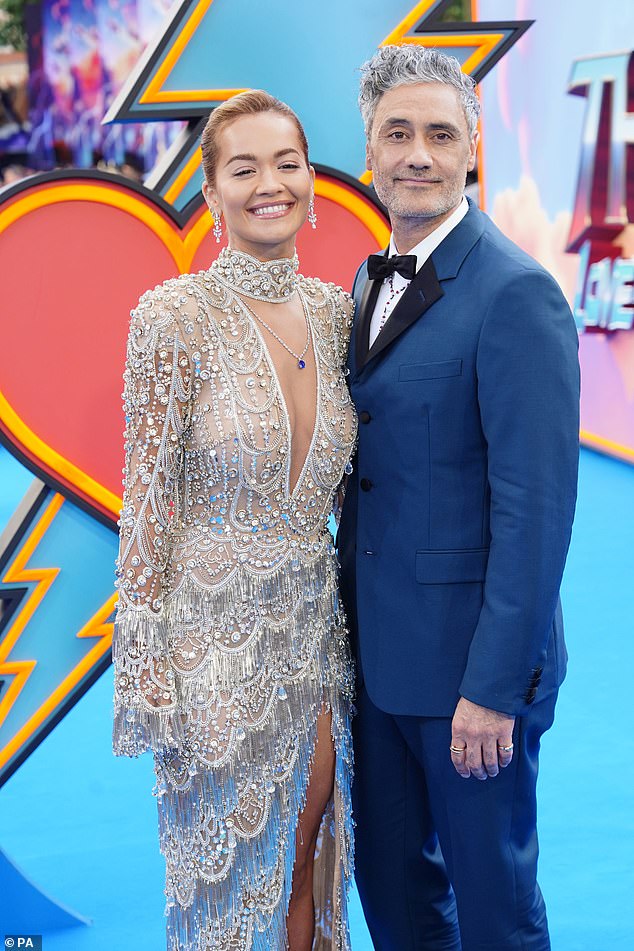