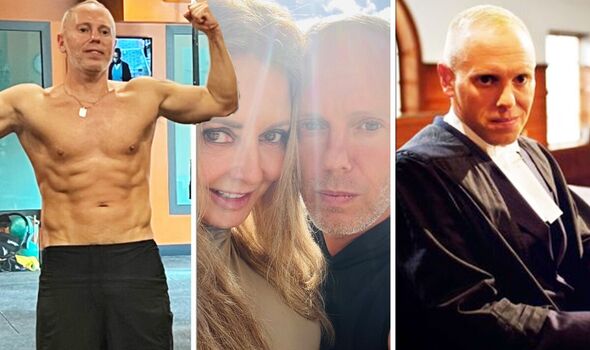 Judge Robert Rinder, 44, took to social media and shared the amazing results of his recent juice cleanse after he enjoyed a 10-day break to Portugal with his pal Carol Vorderman.

Robert Rinder and Carol Vorderman were joined by a host of famous faces including Alex Scott and Alison Hammond.

Taking to Twitter on Friday, Judge Rinder shared a behind the scenes snap of his ripped physique, telling his 249,000 followers, it was partly down to his “juicing and 70km” walks.

“‘The body achieves what the mind believes.’ Thanks @juicemaster.”

Twitter user Anthony wrote: “Well done. You look amazing. I need some (a lot, actually) of your determination and motivation.”

Be Nice quipped: “Who’d have guessed that was hiding beneath the court robes.”

Robert Rinder took to Twitter and unveiled his ripped physique

Social media users gushed over Judge Rinder’s incredible transformation which he largely put down to juice cleanses and a 70km walk.

Carol Vorderman and Robert Rinder posed up a storm

The pals enjoyed a 10-day break to Portugal where they undertook a juice cleanser.

Judge Robert Rinder is known for his ITV show Judge Rinder, the British version of the hit US show Judge Judy.

The age-defying beauty put her toned physique on display in a fitted top and tight leggings.

The Countdown legend shared a series of photos via social media.

Carol Vorderman showed off her dance moves in a cheeky video

ITV’s Alison Hammond shared a fun video as they took part in a funny reel.