Just about everyone is familiar with Prince Harry and Meghan Markle’s interview with Oprah Winfrey that aired back on March 7. Even if you didn’t watch it, chances are, you’ve heard all about it. That could be because the interview marked the very first time that the couple sat down, unscripted, and spoke candidly about royal life. According to Deadline, more than 17 million people tuned in to see what the Duke and Duchess of Sussex had to say.

Fast forward four months, and the TV special has been nominated for an Emmy Award! According to Deadline, the interview found its way to the Outstanding Hosted Nonfiction Series or Special category, alongside “My Next Guest Needs No Introduction with David Letterman,” “Stanley Tucci: Searching for Italy,” “United Shades of America with W. Kamau Bell,” and “Vice.” If the special was to win, it’s not clear who would accept the award, but it sounds like it could be Oprah. Not only did she step in as host, but the interview was also produced by her very own Harpo Productions.

Meanwhile, many royal watchers have been wondering how this news sits with Harry’s brother, Prince William. The interview didn’t do much in terms of helping the brothers mend their relationship, which Harry admitted was strained during the sit-down with Oprah, according to The Sun. A royal expert has given some insight on how William likely feels about the Emmy nod. Read on to find out more.

Prince William hasn't spoken out about his brother's Emmy nomination 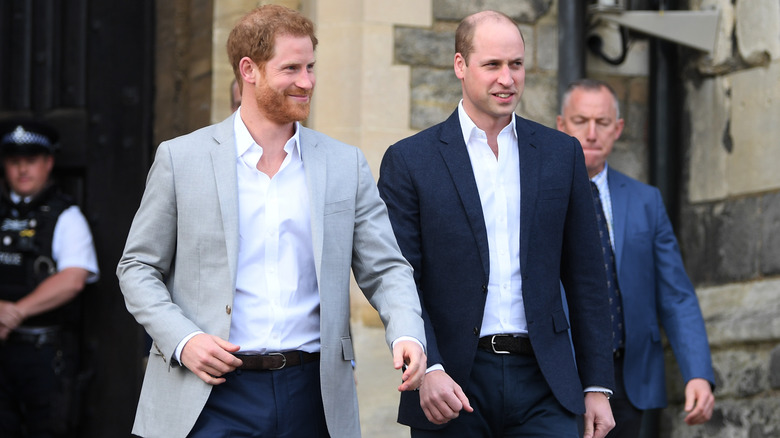 So, is Prince William happy for Prince Harry and Meghan Markle when it comes to their Emmy nod? Probably not. According to royal expert Duncan Larcombe, William is more likely to be “sick” over the news. “William will feel sick to the pit of his stomach at Harry and Meghan’s Emmys nod. The interview was an attack on his family and his wife and is now being heralded as one of the entertainment moments of the year,” Larcombe told OK! Magazine, according to Express. “The Emmys nod is more bad news for the royals. It means that as awards gain momentum, once again Harry and Meghan’s attack on the institution will be repeated over and over again,” Larcombe added.

Based on other media reports, this tracks. There have been various rumors that William is unhappy with Harry because he continues sharing personal struggles with the press. In fact, royal expert Nick Bullen expressed this during an interview with Fox News. “I am told William is absolutely furious at how Harry and Meghan have shared their views about the royal family, about their own immediate family, with the world’s press,” Bullen told the outlet.