Products featured are independently selected by our editorial team and we may earn a commission from purchases made from our links; the retailer may also receive certain auditable data for accounting purposes.

Beats, no doubt, has a had a busy year. The Apple-owned brand released the Studio Buds earlier this year, which had some noteworthy features we loved (killer battery life being one of them), but curiously omitted some key standbys like Apple’s proprietary H1 chip. It seems like an odd move then, to compete with themselves by releasing the more premium Beats Fit Pro just mere months later.

You would then think that they would be up against even steeper competition, having been released within two weeks of Apple’s third-generation AirPods. But Beats has shown that they can really step up to the plate and improve upon their previous models. The new true wireless earbuds are only slightly pricier (around $50 more), but feature a massive range of features from excellent audio quality, to much better active noise cancellation, and all with that same beloved long-lasting battery.

UFC 268 Live Stream: How to Watch Usman vs. Covington Online

All 199 of Taylor Swift's Songs, Ranked

Needless to say, Apple should be worried. It’s almost a little ridiculous how great the new Beats Fit Pro earbuds are compared to the latest generation of AirPods, especially since Apple refused to change a key aspect of their hard-plastic eartip design. Sure, the new AirPods do sound better than their predecessors, but in we found that lack of a tight seal prevented them from adding ANC and sacrificed bass frequencies while listening to music.

But we promise this won’t be all about AirPods, although the comparisons do make themselves — this is a celebration of why Fit Pro is a magnificent example of active-minded, practical design combined with top-tier audio engineering, and why we shouldn’t be sleeping on Beats’ offerings anytime soon. 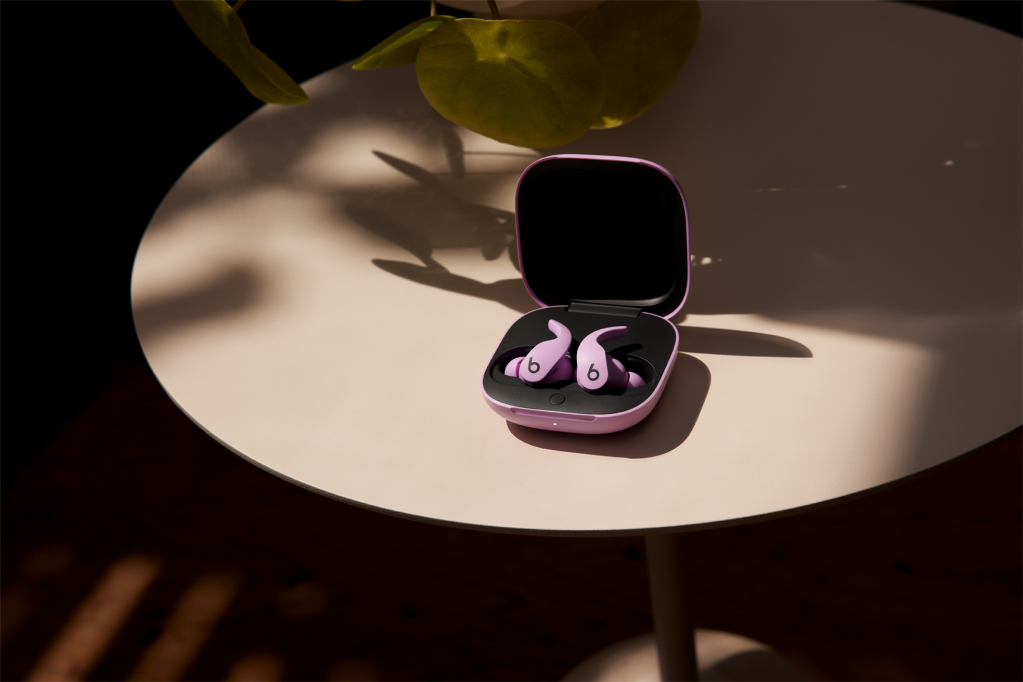 One thing we love about the Studio Buds was their compact, pill-like shape that didn’t feel like there was a suction cup shoved into your ear. While we initially praised their lightweight comfort, the longer we wore them, the less we’d recommend them for sweaty, movement-heavy exercise (they tended to pop out even when we switched gummy tips).

That being said, not everyone loved the over-the-ear wing of the Powerbeats Pro, which could be cumbersome and hard to adjust. The Beats Fit Pro has combined the best of both worlds, shrinking down the wing into a small, flexible wing-like tip that juts out of the compact pill earbud. It’s meant to fit into the natural curvature of your inner ear, and while I dreaded the usual soreness after a few hours, they were still surprisingly comfortable after a full seven hours of wear.

Twisting to adjust, these earbuds are secure and absolutely would not budge during out workout (also thanks to its IPX4 water and sweat resistance rating). Thankfully, they also weigh only 5.6 grams, which is actually lighter than our favorite workout buds, Jaybird Vista Sport (though slightly heavier than AirPod Pros, and decidedly better for fitness). Runners and HIIT enthusiasts will really rejoice at having a compact bud that still won’t slip. 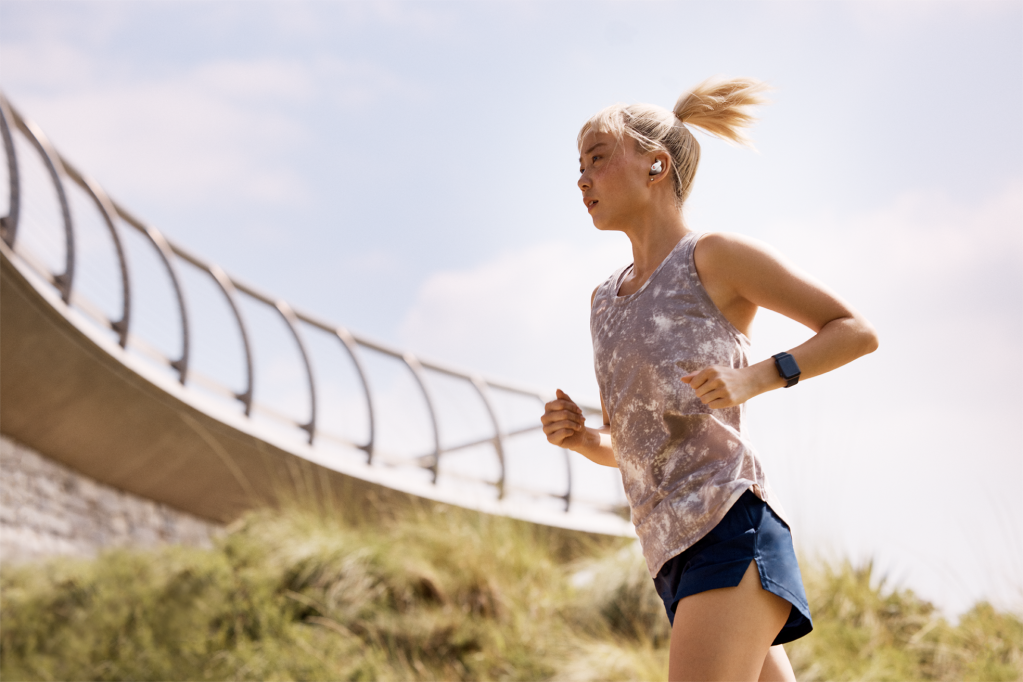 The basic touch controls have remained the same from the Studio Buds, which includes a satisfyingly tactile press onto either bud itself (no finicky tapping here): one tap to pause/play, two taps to skip forward, three to skip back, and holding down to switch between noise cancellation modes. One new feature is that you can customize the final command in your Settings menu to either use Siri or change the volume.

One minor complaint we have is the laughably huge Fit Pro case — sure, it’s not as big as the Powerbeats Pro case, but we found it’s still pretty cumbersome if you have tight pockets. The wireless Qi-charging and MagSafe charging most notably found in AirPods Pro and AirPods 3 cases is also bafflingly absent here. You may care about that feature more than others, but one thing Android users will probably appreciate here is the use of USB-C charging, and not Lightning cables.

Does Beats Pro Work on Android?

Beats has also extended an olive branch to Android users here with the dedicated app for Android devices, making the Fit Pro compatible for most if its features (though it still misses a bit of the inherent cohesiveness of the Apple ecosystem). Android users will miss out on perks like automatic device switching, Apple’s spatial audio with head tracking, always-on Siri access, and audio sharing. Though you can still use the app to control things like touch customization and detailed battery status, it’s a small, emphasis on the small, step in the right direction.

Outperforming AirPods on Audio and Battery

We could just stop here at appearance — but we cannot praise Beats enough for their re-engineering of these buds, with hardware that supports the previously mentioned spatial audio with head tracking, and 9.5 mm drivers that significantly up the audio quality. While testing these out both in quiet offices and on the bustling streets of NYC, they sound better than the Studio Buds, and perhaps even the AirPod Pros.

The midrange and trebles remain solid, but while Beats really held back on the bass for the Studio Buds, it’s a return to form when it comes to low-end performance overall. Everything from Are You Gonna Be My Girl by Jet, to Lovely Day by Bill Withers had a punchier, richer-sounding bass definition. Truly, this is the closest you can get to the subwoofer-like, near-bloated bass levels of old Beats Bluetooth speakers.

Overall, the way music can sound out of these buds is quite impressive. Something that has both high-electronica production with vocals, such as Porter Robinson’s Nurture album, won’t get muddled, with every instrument and layer sounding even more defined and crisp than what AirPods can achieve. This is, in due part, thanks to their tighter seal and improved ANC. 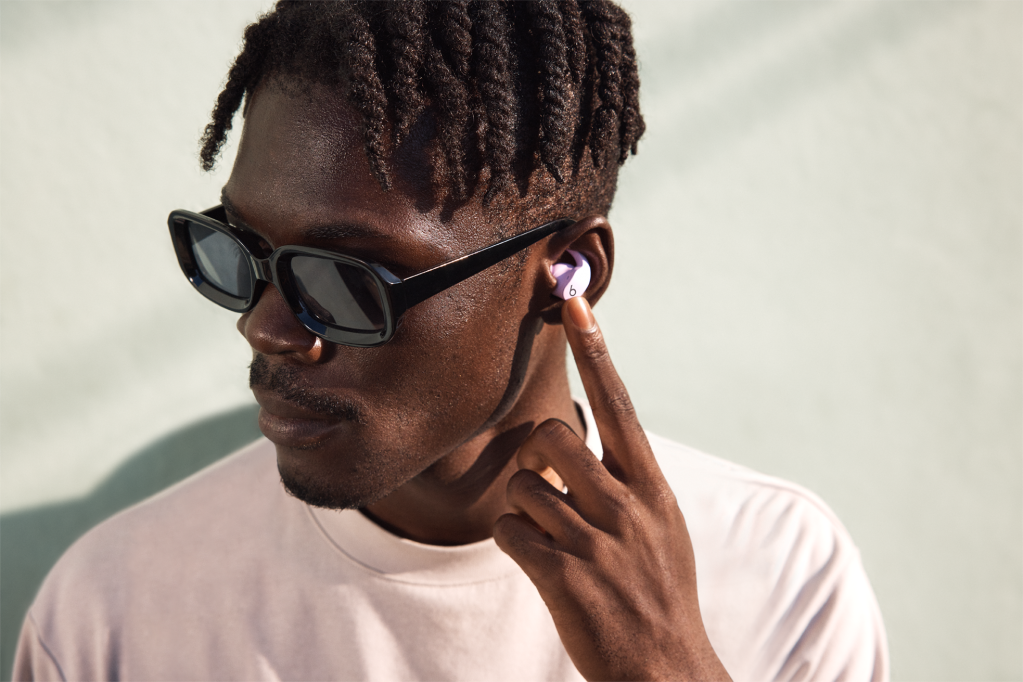 One thing that was sorely lacking from the Studio Buds was the H1 chip, so the buds winded up with a lackluster ANC performance that knocked them down from being truly great. With the addition of this chip, you’ll get AirPods Pro-level noise cancellation with the Fit Pros, including a top-tier “Adaptive EQ” mode that lets you hear transparent, ambient noise more naturally than before.

So then how does the battery hold up? Pretty darn well, we think: the Fit Pro offers seven hours of continuous playback, and up to 30 hours with the case. With noise cancellation off, you’ll get six hours and 27 hours, but that’s still significantly more than the measly 4.5 hours for the AirPods Pro, and comparable to the AirPods 3. With the case fully charged, you can get an extra 21 hours of battery life, and a quick five-minute top-off gives you an hour of playback.

But one area where AirPods Pro has the edge? Call quality. Beats packed the Fit Pro with six microphones, five of which are used during voice calls. There’s also a system to isolate your voice, as well as wind noise mitigation. In quiet environments, such as over Zoom calls, we found that the quality was clear and crisp. However, while taking a call on the street, I was told my voice sounded less pronounced, with more background noise bleeding through than while using the AirPods. We might see this improved up in a future software update, though, so don’t count them out yet. 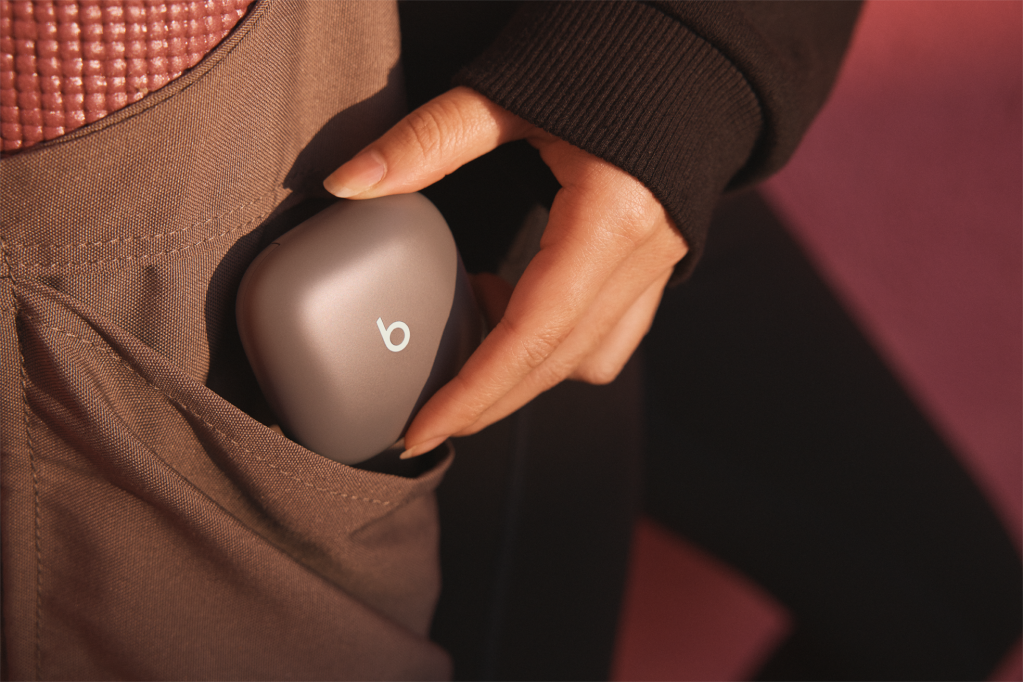 Are Beats Fit Pro Worth It?

Beats proves that they’ve finally hit their stride, taking all their best features from previous models (extended battery life in Studio Buds, wingtips in the Powerbeats Pro) and improving upon them to make their best earbuds yet. Fit Pros let you  comfortably listen to premium-quality sound for hours on end, and can still power through the toughest workouts.

They’re clearly still working out a few kinks when it comes to call quality and accommodating Android users, but we’ll say that if you have an iPhone, these are currently the best of the best from Apple. With a beefy bass, sportier fit, and on-par ANC, you might want to reach for these over the AirPods 3, and at least consider them over the AirPods Pro.

For your best workday (and workout) companion (and premium features at comparable price to AirPods), the Beats Fit Pro are absolutely worth it.