Sia took to Twitter in defense of her decision to cast able-bodied performer and frequent collaborator, Maddie Ziegler, in her new movie ‘Music,’ telling online critics that she ‘spent three years researching.’

Sia spent November 20 on Twitter defending her decision to cast Maddie Ziegler as a teen who lives with special needs. The “Elastic Heart” singer, 44, took to Twitter in the early morning hours to answer to critics who called out the casting choice of the dancer and actress, 18. “I spent three f—ing years researching. I think that’s why I’m so f—ing bummed,” the singer said in one tweet. Maddie and Sia have been working together as early as her 2014 single “Chandelier.” 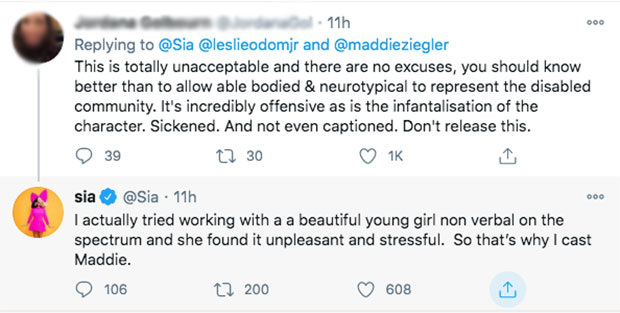 Sia also doubled down on her tweet, saying in a separate message that the unnamed young actress she initially worked with found it “extremely stressful and overwhelming.” In another tweet, Sia shared that she had cast “thirteen neuroatypical people, three trans folk, and not as f––king prostitutes or drug addicts but as doctors, nurses and singers. F––king sad nobody’s even seen the dang movie,” she said. “My heart has always been in the right place.” 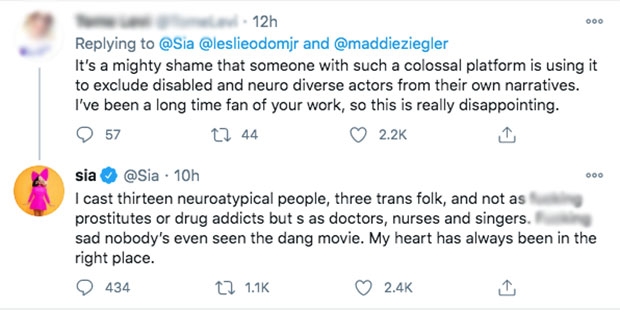 The Grammy nominee’s directorial debut is slated for a February 2021 release. Music follows Zu, a recently sober young woman who becomes the sole guardian of her younger half-sister named Music, who is on the autism spectrum. The film co-stars Kate Hudson, Leslie Odom Jr., and Juliette Lewis among more stars. The first trailer, which you can see above, debuted today.

In closing her tweets, Sia shared that she was “really looking forward to” perspective audiences seeing the final product. “Mocking is the very last thing either Maddie or I wanted to be so misunderstood. Please watch it before you judge it.”