This Geico commercial is a bit ridiculous but that’s what makes it memorable. Two average guys are playing Frisbee on the front lawn of a suburban home. A voiceover telling them they can save money by switching their car insurance to Geico distracts them and the Frisbee is tossed onto the roof of the house. The guys look up at it with confusion.

Enter one dynamo gymnast clad in a leotard. She flips and twists her way across the lawn, uses the branch of a tree like the uneven parallel bars, and launches herself onto the roof where she retrieves the Frisbee. The gymnast then flips off the roof executing somersaults while she’s in the air. She sticks her landing and hands the Frisbee back to the guys. They thank her and the commercial cuts to the gymnast making her signature face — one that made her go viral at the 2012 summer Olympics in London.

Keep reading to find out who the famous gymnast in the Geico commercial is and what she’s been up to since bringing home the gold as part of the Fierce Five in 2012.

McKayla Maroney is not impressed 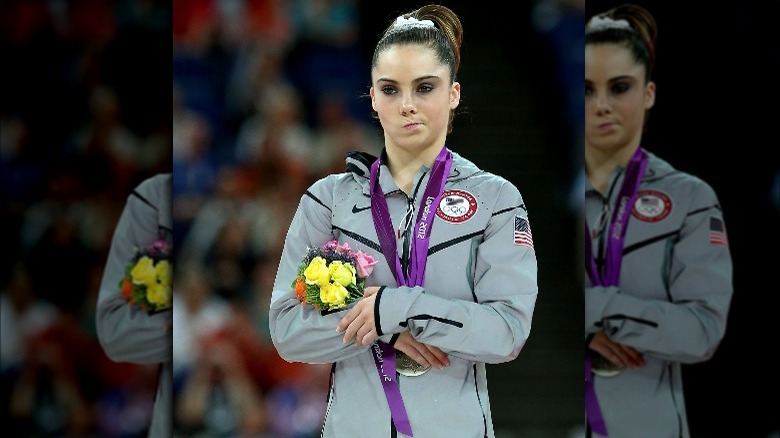 Gymnast McKayla Maroney is the famous gymnast flipping and twisting her way across the lawn and onto the roof in the Geico commercial. She was a member of the U.S. Women’s gymnastics team in 2012 that won the gold medal. She also won the individual silver medal on the vault.

After she won the silver medal on the vault, the brief look of disappointment with her lips pursed off to the side of her face while she stood on the medal stand went viral as the “McKayla is not impressed” meme. Maroney went into the individual gymnastics competition as the overwhelming favorite to win the gold on the vault. However, she fell on the second of her two vaults, per NBC News, and Romanian Sandra Izbasa took the gold.

Maroney retired from gymnastics in 2016, and in an interview with GymCastic, Maroney revealed that she’s interested in an acting career. She’s made inroads there with a recurring role on “Hart of Dixie” and appearances on “Bones” and “Superstore,” per IMDb.

McKayla Maroney was instrumental in bringing Dr. Larry Nassar down 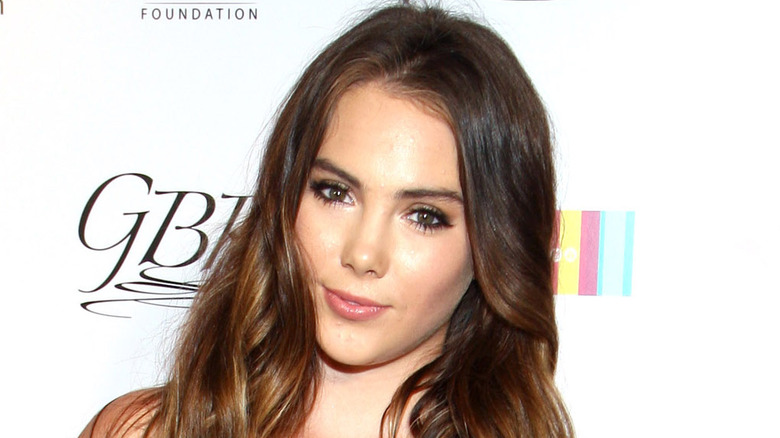 McKayla Maroney was an integral part of the investigation and trial of former U.S Gymnastics team doctor Larry Nassar. In October 2017, Maroney revealed that Nassar had sexually assaulted her from the age of 13 until her retirement from gymnastics in 2016, per CNN.

In December 2017, Maroney filed a lawsuit against Nassar, the U.S. Olympic Committee, USA Gymnastics, and Michigan State University (which employed Nassar) accusing the USIOC and USA Gymnastics of covering up the years of sexual abuse, according to the Los Angeles Times. She alleged that those organizations offered her $1.25 million to sign a confidentiality agreement. She signed it and took the money, per ESPN.

When Nassar was being sentenced, USA Gymnastics waived the agreement temporarily so that Maroney could make a victim’s statement against Nassar in court. She said, in part, “For me, the scariest night of my life happened when I was 15 years old. I had flown all day and night with the team to get to Tokyo. He’d given me a sleeping pill for the flight, and the next thing I know, I was all alone with him in his hotel room getting a ‘treatment.’ I thought I was going to die that night,” (via Time).

Nassar was sentenced to 40 to 175 years in prison after more than 150 women and girls gave statements or testified that he sexually abused them over the past two decades, per CNN.