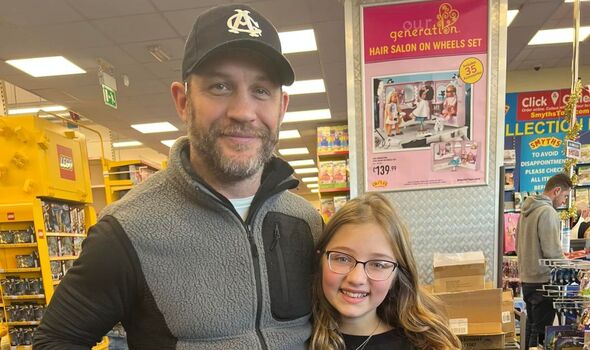 Tom Hardy made a young fan’s Christmas after he stopped for a photo in a toy store.

Eliza Cartwright, 13, was with her dad, Michael, as he completed some last-minute shopping on Christmas Eve when she ran into the famous actor.

The dad and daughter could not believe their eyes when they popped into Smyths Toy Superstore on Portrack Lane in Stockton-on-Tees, Teesside, and saw the Hollywood star doing some Christmas shopping of his own.

Michael approached the A-list actor to ask if he would not mind posing for a photo with Eliza, who is a huge Tom Hardy fan, and he kindly obliged.

Eliza was thrilled, with her dad saying she thought her Christmas had come early with the star-studded interaction.

Michael told Teesside Live: “She was over the moon, it definitely made her Christmas.

“We’d just been to the Middlesbrough stadium to pick up some tickets and they’d given her some free stuff as well, so she was already on cloud nine that the staff at the Boro ground had given her free stuff, then to go there as our next stop and bump into Tom Hardy she was just overwhelmed.

“I don’t think she’ll ever forget this one.”

One person who was gutted to miss out on the chance-meeting was Eliza’s mam, Emma, who was at home getting ready for the big day.

The pair were a little bit worried about telling her they met the Bronson star in case she was jealous, but fortunately she took the news well.

Michael added: “My wife is a big fan and she wasn’t there unfortunately, so she was a bit devastated.”

“But I wished him a merry Christmas because it was Christmas Eve, just a few hours before the shops were closing for Christmas Day so it was nice to see him on Christmas Eve.”

Michael said he did not want to keep the A-lister for too long as it was “his Christmas Eve, too” but said he was very pleasant and happy to have his photograph taken.

He posted about the encounter on Facebook which quickly caught the attention of heartbroken women all over Teesside who were gutted to have missed out on a meeting.

This is not the first time the Peaky Blinders star has been spotted in the area as he has family ties on Teesside.

Not only does his wife, actress Charlotte Riley, hail from Thorpe Thewles near Stockton where she attended Teesside High School, but his Grandad was also born in the area.

Teessiders certainly have a soft spot for the down-to-earth Hollywood star and he always has time to stop for a photograph and a chat with fans.

Ormesby man Danny Appleby was stunned in August when he attended a Jiu-Jitsu tournament in Birmingham and discovered he would be facing-off against Mad Max himself.

He described the encounter as surreal but said at the time what a great sport the star was and how he managed to put him at ease.

He explained: “I was shell-shocked. He said ‘just forget it’s me and do what you would normally do’.”

Tom was also spotted last Christmas making a visit to Saltburn Mini Golf for a coffee on the lower promenade.

It seems that the actor’s star quality has everyone a little bit star-struck, as when business owner Andrew Smith met him, he also got a little bit flustered.

Following his visit, Andrew said: “I’m a 50-year-old bloke and I got a bit flustered, I couldn’t really concentrate.

“We have quite a lot of footballers and managers come but we have never had anyone of that kind of calibre down there!”

The actor as also previously been spotted on a night out in Yarm, after going for a drink at the popular Black Bull pub in 2018.