Our guide to pop and rock shows and the best of live jazz happening this weekend and in the week ahead.

JOJO ABOT at the Sultan Room (June 29, 8 p.m.). The newest addition to the bustling night life scene in Bushwick, Brooklyn, this club tucked behind the Turk’s Inn restaurant — a tribute to a onetime Wisconsin supper club whose name it shares — has had a busy first week of programming. On Saturday, it will host a release party for Abot, a Ghanian-born singer, rapper and performance artist whose music is grounded in bold visuals and tinged with Afrofuturism. Her new EP, titled “Power to the God Within” — part of a series of multimedia exhibitions — ambitiously continues the explorations of oppression, blackness and divinity that drove her 2017 release, “Ngiwunkulunkulu” (which means “I am God” in Zulu).
thesultanroom.com

DRIVE-BY TRUCKERS at Brooklyn Bowl (through June 29, 8 p.m.). Politics and contemporary country music have an uneasy relationship, to say the least — artists inclined to speak their conscience often do so at the risk of being ostracized by the genre’s radio gatekeepers. This alt-country group from Athens, Ga., has long bucked the expectation of apoliticism, but never more willfully than on their most recent album, 2016’s “American Band.” Its songs, like “What It Means” and “Ever South,” address topics such as gun violence and immigration. This weekend, they will close out a six-night run at this concert hall in Williamsburg, Brooklyn.
718-963-3369, brooklynbowl.com

EMPATH at Pioneer Works (June 28, 7 p.m.). This Philadelphia-based quartet makes songs that are as catchy as they are unorthodox. On “Active Listening: Night on Earth” — their debut album, released in May on the queer-forward punk label Get Better Records — the group splices pop hooks with hardcore fervor and New Agey embellishments, to delightful ends. Their appearance at this art space in Red Hook, Brooklyn, is copresented by The Baffler and will kick off Press Play, a two-day book and music fair. Empath will be joined by their label mates Control Top, a postpunk trio.
pioneerworks.org

LIZ PHAIR at Prospect Park Bandshell (June 29, 7 p.m.). In the mid-90s, this renowned singer-songwriter became, as she told The New York Times last year, an “accidental feminist spokesperson.” That was due to the release of “Exile in Guyville,” a collection of scrappy guitar songs noted for what was then considered a brazen expression of sexuality and its condemnation of male apathy, penned in response to the Rolling Stones’ “Exile on Main Street.” More than a quarter-century later, Phair’s influence is manifest in young artists like Soccer Mommy and Lindsey Jordan (Snail Mail), who once played in a Phair cover band. In Prospect Park, she appears alongside the punk shape-shifter Ted Leo and the wry songwriter Caroline Rose.
718-683-5600, bricartsmedia.org

PHONY PPL at Mercury Lounge (June 29-30, 7:30 p.m.). Though all five members of this Brooklyn-based group are under 30, they’ve been playing together for more than a decade. Since forming in 2008, the band has gone through lineup changes and lulls, and several members have explored side projects; still, their chemistry is stronger than ever on “mo’za-ik,” their sixth album, released in October. The record traverses dreamy R&B (“Way Too Far”), playful hip-hop (“Before You Get a Boyfriend”) and politically charged soul (“on everythinG iii love”). Expect them to play selections from the album during their two-night stand at this club on the Lower East Side. Saturday night’s performance is sold out, but tickets remain for Sunday.
212-260-4700, mercuryeastpresents.com

[Read about the events that our other critics have chosen for the week ahead.]

SCREAMING FEMALES at Industry City (June 28, 8 p.m.). Hailing from nearby New Brunswick, N.J., this experimental rock band has been a commanding presence in alternative music circles. Fourteen years after their founding and long after graduating to bigger stages, they retain the punk ethos of a group that came up through basements and other D.I.Y. hot spots. For this show, presented by City Farm as part of its summer series, they will be joined by Swearin’, the band fronted by Allison Crutchfield and Kyle Gilbride. The group split in 2015 but reunited in late 2017 and last year released “Fall Into the Sun,” a bright, galloping, guitar-driven album on which both singers ponder the passage of time.
cityfarmpresents.com
OLIVIA HORN 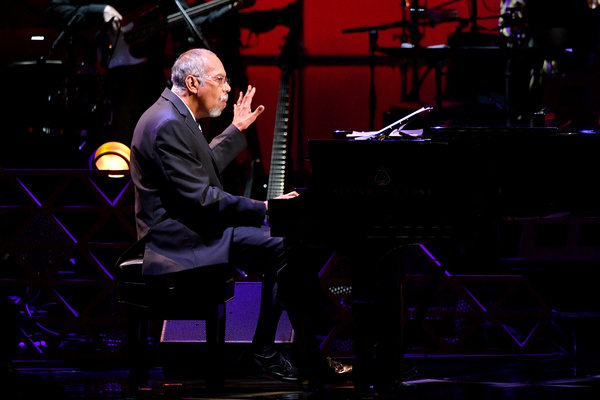 STANLEY COWELL at Smoke (June 28-29, 7, 9 and 10:30 p.m.). Cowell can make the piano dance by playing in a jaggy rhythm, or simply by manipulating the tone of his harmonies, or by throwing his right and left hands into a thrashing repartee. This weekend run is billed as a look back at his 60-year career, and there’s a lot to celebrate: He came into the jazz consciousness in the 1960s, turning heads with his idiosyncratic style and bold compositional voice; co-founded the influential, independent label Strata-East; and has continued expanding ever since, composing short pieces and long suites, and sometimes experimenting with electronics. Joining him at Smoke are the trumpeter Freddie Hendrix, the saxophonist and flutist Bruce Williams, the bassist Tom DiCarlo and the drummer Vince Ector.
212-864-6662, smokejazz.com

JEROME HARRIS QUARTET at Bar Lunático (July 1, 9 and 10:30 p.m.). For much of the 1980s and ’90s, Harris served as the guitarist in Sonny Rollins’s band, while also establishing himself as a mainstay of New York’s improvising avant-garde. Harris — who doubles on bass and has conducted scholarly inquiries into some remote corners of the black-music lineage — draws no clear lines of demarcation between African song, mainstream jazz and the avant-garde. He is most often heard as a side musician, but at Lunático he’ll lead a group featuring Jeremy Udden on alto sax, Dave Baron on bass and Lucianna Padmore on drums, with Harris handling guitar and vocals.
718-513-0339, barlunatico.com

SEAN JONES at Dizzy’s Club (June 27-29, 7:30 and 9:30 p.m.). You’re hard-pressed to find a straight-ahead jazz trumpeter with a more powerfully satisfying style: Jones plays with a smoky, magnetic grace, born of his boisterous disposition and almost total command. Through Saturday, he will celebrate the life and legacy of Dizzy Gillespie (the trumpeter for whom the club is named) with “Dizzy Spellz,” a program he wrote with the dancer and vocalist Brinae Ali that addresses how this bebop pioneer interacted with the cultural and spiritual questions of his time. Jones will be joined by Ali, the turntablist Wendel Patrick, the pianist Zaccai Curtis, the bassist Boris Kozlov and the drummer Obed Calvaire.
212-258-9595, jazz.org/dizzys

ANAÏS MAVIEL at Roulette (June 28, 8 p.m.). A rising vocalist, movement artist and multi-instrumentalist, Maviel is one of two 2019 Van Lier fellows at Roulette. In that capacity she is preparing and performing new works throughout the year, and on Friday she will present “Time Is Due,” which she calls an “operatic installation” for an electroacoustic ensemble. It interrogates the concepts of coexistence and interdependence, using music as both an embodied concern and a metaphor. Maviel will take the stage with five other vocalists, all of whom will also be playing keyboards and percussion instruments, some of them custom-made by Jonatan Malm.
917-267-0368, roulette.org

WILLIAM PARKER’S IN ORDER TO SURVIVE at ShapeShifter Lab (July 1, 7:15 p.m.). The banner-carrying bass elder of New York’s free-jazz community, Parker has been performing and recording prolifically since the 1970s, when he began working with the eminent pianist Cecil Taylor and established himself on the bustling loft-jazz scene. For over 25 years, Parker has led In Order to Survive, a quartet of all-stars from his avant-garde generation currently featuring the alto saxophonist Rob Brown, the pianist Cooper-Moore and the drummer Hamid Drake.
shapeshifterlab.com

WADADA LEO SMITH at the Stone (through June 29, 8:30 p.m.). This inimitable trumpeter is in the midst of an extended late-career boom, putting out mind-altering material at a rapid clip, in a range of formats. In all his work, what stays constant is the heavy, sighing power of Smith’s expression — a physical and calming force, speaking of poise and forbearance — as well as restless vision. His residency at the Stone this week presents a chance to hear a number of his projects over the span of a few days. On Thursday he performs a tribute to the drummer Ed Blackwell, in duet with Pheeroan akLaff, on Friday he presents his composition “Red Autumn Gold/Silence,” joined by two cellists and two pianists, and on Saturday he appears with an eight-piece electroacoustic ensemble, playing a piece titled “Ritual Light, a Cosmic Luminous Wave-Field.”
thestonenyc.com
GIOVANNI RUSSONELLO