Theater of the absurd has nothing on the bizarre scenario endured by Britain’s playhouses during 2020. March 16 was the first of several doomsdays on which the coronavirus pandemic forced them to close their doors, bringing to a halt a theatrical economy worth billions of pounds.

Then came months of nothing, followed by the gradual emergence of outdoor shows, then indoor performances, when financially practical: no big musicals or Shakespeares, just bite-size plays, performed in auditoriums newly configured to meet government guidelines.

Several pioneering venues — the Bridge Theater, in London, pre-eminently — opened again at the end of the summer, but not for long. They, too, were shuttered again by a second lockdown, in early November — albeit a shorter one, which lifted on Dec. 2.

This was replaced by a tiered system of geographical restrictions, which meant that theaters in parts of the country were open, while others had to stay shut. In London, this critic’s diary was briefly filled with press night appointments that recalled the halcyon days of old. But now, as of Dec. 16, the city has entered the grim “Tier 3,” and that surge in activity has proved to be short-lived — at least for in-person performances, rather than events streamed via the internet.

Theaters have responded to these whiplash changes with a nimbleness that wasn’t in evidence this time last year. (Equally improbable back then was the notion of socially distanced seating, with legroom worthy of an airline’s first class.) Shows have learned to be readily adaptable for online distribution: That was the path taken by “Death of England: Delroy,” the production chosen to reopen the National Theater, in November. Its opening night turned out to be the closing one, too, when the second national lockdown was announced, but it went out on YouTube later that month. That brought Roy Williams and Clint Dyer’s fiery solo play to audiences worldwide, and confirmed the prevailing awareness that smaller was better in these corona times. 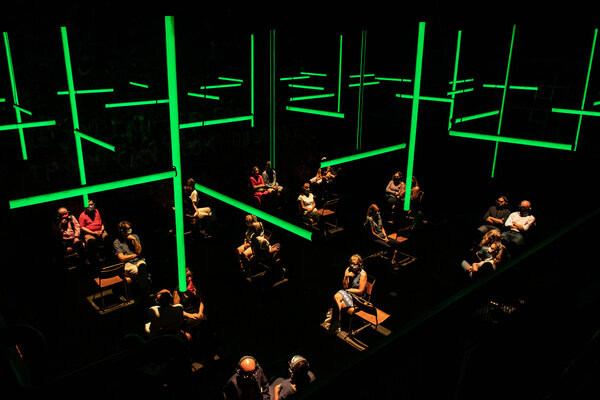 Throughout the pandemic, you had to marvel at the ability of theater people to follow the work, wherever it might lead. Juliet Stevenson, for instance, should by rights have spent much of this year leading the West End transfer of Robert Icke’s production of “The Doctor.” Instead, the stage veteran turned up first as a voice — experienced not live, but via headphones — in the astonishing Simon Stephens aural experience “Blindness,” and then as a droll Lillian Hellman in an online version of a gossipy American play called “Little Wars.” Caryl Churchill, a stalwart presence at the mighty Royal Court, was among the talents assembled for “The Lockdown Plays,” a series of podcasts in which the 82-year-old writer’s ongoing interest in the quietly apocalyptic came to the fore once again.

While the last year has shown the folly of forecasts, 2021 would seem to portend better theatrical times ahead. Hopefully, Britain’s head start on the rest of the world with a vaccine suggests a return to cheek-by-jowl seating and full houses sometime next year.

Without such confidence, Andrew Lloyd Webber wouldn’t be looking at a start of performances in late April for his new musical “Cinderella,” a major commercial venture set to open in the West End, even as Broadway will remain shuttered until May, at least. David Tennant, Megan Mullally and Adrian Lester are among the star names announced for some London openings during the first half of 2021. Their luster, with luck, will entice possibly wary playgoers to purchase tickets for live performance once again.

Sure, we’ve learned to embrace Zoom and YouTube to savor virtual productions, which are preferable to none at all. But London feels ready to return to full theatrical form as soon as conditions allow — and if not? Well, this strange new normal should give Britain’s playwrights something to write about, for a long while to come.

On paper, French theater has been relatively lucky in this pandemic year. Buoyed by high levels of public funding for the arts and rounds of government support, most venues resumed performances between the country’s first lockdown, from March to May, and the second, which started in late October. No major company or theater has been forced to close its doors permanently (yet). That’s more than many Western countries can say.

Yet 2020 often felt like “Groundhog Day” — a never-ending grind of closures, reopenings, restrictions and curfews which, based on conversations with artists and administrators, has left many bone tired. Perceived slights to the culture sector, so integral to France’s identity, have bred resentment. While the country’s new culture minister, Roselyne Bachelot, appointed last July, scored points with the sector in the summer and early fall, the planned reopening of theaters and cinemas in December has now been postponed until January at the earliest, and the grumbling has returned.

When theaters could welcome audiences, their hit rate seemed higher than in past seasons: Perhaps scarcity heightened the thill. In early October, the Comédie-Française troupe teamed up with the film director Christophe Honoré for “The Guermantes Way,” a Proust adaptation that struck the perfect balance between immersion and irreverence. At the Théâtre Gérard Philipe, Margaux Eskenazi and Alice Carré tackled the legacy of the Algerian decolonization war with great finesse in “And the Heart Is Still Steaming.”

Comedy, meanwhile, often felt like a public service. From a warm reinvention of an 18th-century original (Emmanuelle Bayamack-Tam’s “À l’Abordage!”) to the absurd humor of the excellent Chiens de Navarre collective, comedians played their part in keeping us sane.

As happened everywhere else, streams of recorded productions mushroomed during the two lockdowns, but these felt like a consolation prize, rather than an area of genuine innovation. French theater is very attached to its extensive network of brick-and-mortar venues, and the priority was to get back to the stage.

One notable exception was Marion Siéfert’s “Jeanne Dark,” billed as the first French play to be offered live and via Instagram simultaneously. Helena de Laurens, the superb lead, played a teenager who confides in her followers, in a long Instagram Live session, about her Catholic parents and joyless school life.

At La Commune in the Paris suburb of Aubervilliers, where it was created in October, the audience witnessed de Laurens filming herself, while Instagram users saw the show in real time on Jeanne’s fictional account. “Jeanne Dark,” which is set to tour in 2021, wryly captures the gap between the two-dimensional feed and reality.

This year has been a reminder that our definitions of theater are sometimes too narrow: Performances outside the big urban institutions are part of France’s culture, too. The first show to be staged after the spring lockdown, Léna Bréban’s “Cabaret Under the Balconies,” took place at a nursing home 200 miles from Paris, and I can’t think of a more fulfilling experience this year than sitting with the elderly residents to watch pared-down song and dance numbers after months of isolation.

And if events that look a lot like performances are going to take precedence over theaters when coronavirus restrictions are eased, then they should probably be reviewed, too. The whiz-bang productions on offer at the Puy du Fou, a historical theme park, reopened early to much controversy, in June; in late November, the drama of the Catholic Mass returned to France’s churches, though playhouse doors remain shut.

A critic’s job doesn’t have to stop when the curtain comes down. All the world’s a stage, after all.

This was the year when going to the theater became a matter of life and death: Who was willing to risk catching a deadly virus just to enjoy some Shakespeare?

In the German-speaking world, as everywhere, theater was among the first causalities of the pandemic. One by one, premieres were canceled, then the festivals, too. It’s still unclear what the fate of all of those productions will be. But luckily, the future of the performing arts themselves doesn’t hang in the balance, as it seems to in other parts of the world.

The deep conviction in Germany, Austria and Switzerland that art is valuable to society means that government-sponsored theater, opera and music has had a fighting chance of survival.

Over the past nine months, I’ve marveled at the resilience. I’ve been heartened and impressed by the directors, managers and performers who worked creatively with restrictions to keep the show going under challenging circumstances.

Quality varied greatly, as it always does, but what mattered most was that companies kept going — even when it meant preforming for a handful of audience members, or just for the cameras. Many playhouses began to cleverly redefine the theatrical experience itself, from developing online formats to performing in unusual locations and configurations. At the same time, streamed theater came of age, although it often sapped the experience of its live wire excitement and vitality.

The pandemic forced me to be far less of a roving critic than usual. For the most part, I sheltered in place, in Munich. But summer and early fall, with their relative permissiveness, seem now like some long-ago idyll. Lockdown lifted, and I was free to travel — with P.P.E. and disinfectant, of course.

In early June, the Stuttgart State Theaters, in the south of Germany, triumphantly drew back their curtains with a theatrical walkabout that was as momentous as it was meticulously executed. It was, without a doubt, the production of the year. Then came the defiant centenary edition of the Salzburg Festival, in Austria. It deserves a 21-gun salute for realizing its reduced but still formidable installment, which boasted two world premieres in its dramatic program, including one from a Nobel laureate. Subsequent stations for me included Leipzig, Berlin and Hamburg — and then lockdown hit again.

Critics are not in the predication business (except, maybe, when it comes to awards), so I’m not going to speculate about what 2021 might bring. In many places, the pandemic has proved a stress test for the arts and culture. Yet the coronavirus has not exposed fault lines and structural problems for the arts in the German-speaking world the way it has in the United States. When the public health crisis is over, there won’t be much need for the theaters, opera houses and orchestras here to “build back better.” That, in itself, is reason for optimism.