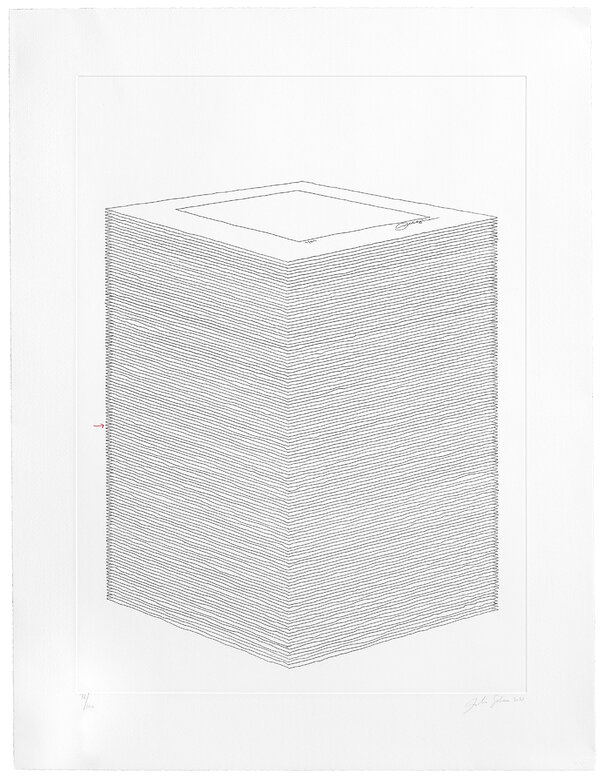 A print, at least usually, isn’t finished when you pull the sheet off the lithograph stone or the copper plate. You have to sign the print, outside the plate mark, and then number it. So each identical print becomes unique outside the artwork’s borders — an antinomy that Analia Saban, an Argentine-artist based in Los Angeles, disturbs and amplifies in “This One,” her clever, subtly difficult recursive series of three black-and-white etchings.

Each print (in editions of 25, 50 and 100) depicts a stack of papers in a simple, isometric view that recalls a computer icon. The stacks represent the entire print run of each etching — with ample white space in the 25-count print, nearly filling the plate in the 100-count one. The artist’s signature appears both within the image, on the top “print” in the pictured stack, and outside it, signed by hand.

Also added by hand: a red arrow, pointing to the sheet in the stack representing the individual print itself. In the specimen on view here, numbered 72/100, Ms. Saban has drawn the arrow at the 72nd sheet from the top. Crucially, the arrow is inside the plate mark, thus violating the fidelity of the reproduced print. So each print is both an index of itself and a representation of the whole series — or is it? The red arrow makes each copy not quite a copy, though not quite unique either. And in a further twist, they’re all priced the same regardless of edition size: Since each print in “This One” is individuated, the 25-count one is no rarer than the 100-count.

It’s an ouroboros of printmaking — which, like three others here, Ms. Saban executed with the masters of the Los Angeles print shop Gemini G.E.L. Yet “This One” has none of the ponderousness of earlier conceptual art. It’s spryer, friskier and, like the art of her old professor John Baldessari, it comes across its philosophical profundity partly through jest. “This One” is a challenge to printmaking, but it’s also a really smart joke.

I first encountered Cate Giordano’s work at the art fair Spring/Break, where the artist (who uses the pronoun “they”) created enchanting installations marked by a blend of strangeness and sentiment. In 2016, using accessible, tactile materials like wood, papier-mâché and tape, they constructed a life-size diner filled with patrons. The room seemed caught in a state of suspended animation, and I could feel the artist’s devotion to alternate, often bygone worlds.

Those same qualities are evident in “Rex,” Giordano’s first exhibition at Postmasters. The subject is King Henry VIII and his brief marriage to Anne of Cleves. The king was urged into the union by his powerful minister, Thomas Cromwell, and agreed to it after commissioning a portrait of her by Hans Holbein. Once his bride arrived, though, Henry claimed that she looked nothing like the painting and was so unattractive he couldn’t consummate the marriage. (Cromwell was later beheaded.)

Giordano conveys this not in linear fashion, but in immersive, multimedia tableaus. Dotting the gallery are sculptures of the king and future queen, guards and banquet food; their purposeful crudeness underlines the messy absurdity of the royal affair. So, too, do the videos, which enact snippets of the story and feature the artist as both Anne and Henry, who converses with Holbein and Cromwell over a video chat. Giordano is magnetic and wickedly funny, particularly as the bumbling, vainglorious king. The artist turns Henry from a despot with world-historical importance into an average man with an outsize ego. There’s a lesson to be found in how his behavior doesn’t seem unusual but instead, utterly common.

The trauma of being a U.S. soldier in the Vietnam War reverberates through Kim Jones’s tough, gritty assemblage-sculptures, drawings and endurance performances. Examples from 50 years of Mr. Jones’s oeuvre are on view in “RATS LIVE ON NO EVIL STAR” (a cryptically evocative palindrome) at Bridget Donahue.

Mud, rats and thrift-store objects play a prominent role for Mr. Jones’s creative universe. (An early performance, partially referencing his experience at war, consisted of burning live rats onstage, which raised the ire of activists.) Here, “Little Tike” a sculpture reworked from 1973 to 1999, is built around a pink toy plastic vehicle augmented with foam, wire, gauze, and other materials and parked vertically on the wall. “Untitled” (1969-2019) is a pair of military trousers issued to Mr. Jones; with eerie, spectral figures painted on the legs, he may also be referencing the leg braces he wore in childhood.

Photographs of Mr. Jones’s grueling urban performances in the 1970s are included in this show, as well as recent drawings, often over photographs. A video on Bridget Donahue’s website documents a 1979 performance-walk in which Mr. Jones slathered himself with mud and carried a big homemade armature around the streets of San Francisco. At once artist, shaman and alienated Everyman, his work resonates at this moment, when raw creativity is being summoned in the service of healing battered bodies, psyches and spirits.

For decades Harmony Hammond has been making textile art which, as Holland Cotter wrote last year on the occasion of her first museum retrospective, troubles the boundaries between traditional media. A sculpture might have the sheer planes and intricate color balances of a painting; a painting might be as insistently chunky as a sculpture.

But the group of large new canvases showing now at Alexander Gray Gallery, though they start from similar premises, have a slightly different effect. The titular grid of “Bandaged Grid #9” is made of brass grommets poking through horizontal strips of cloth. Most of these strips are the color of dirty field dressings, but a few are soaked in red, including a lone vertical rectangle that hangs down like a bloodied flag of surrender. In two “bandaged quilt” paintings, white strips are laid out in concentric rectangles — like bird’s-eye views of ziggurats — that culminate in narrow exposures of an underlying red. “Black Cross” and “Red Cross,” with graphic shapes laid over more grommets and seams, are pointed rejoinders to a whole history of modernism.

In all of them, texture plays as vital a role in the viewer’s impression as color or shape, particularly the scarlike lines where “bandages” overlap. But I wouldn’t call them sculptures, or even exploded paintings. They’re simply paintings that are honest about being objects.