You know that hideous scrum of investors storming the stage when their show is named best play or best musical at the Tony Awards?

Well, they’re heading back unless somebody stops them.

The 2021 Tonys, which because of the pandemic are actually the 2020 Tonys, will be awarded on Sept. 26. That will make 27 months since the last telecast, in June 2019: plenty of time to rethink what has become a reliably mortifying experience. But to do that, Broadway will have to face up to the way it has traditionally favored the financiers over the artists in its shotgun wedding of art and commerce.

Take the 2014 telecast, on which Jennifer Hudson sang the bombastic title song from the musical “Finding Neverland.”

Was that show in the running for any awards? No — it did not even open until the following season. Was Hudson at least supposed to appear in it? No, but she was more famous than anyone who did. Was the staging, in which Peter Pan performed a ballet in green camo while Hudson swanned nearby in silver lamé, even remotely understandable?

Well, yes, if you knew that the producer of “Finding Neverland” was Harvey Weinstein.

Even when not being manipulated by moneybags, the awards have regularly represented Broadway as a neurotic mess: defensive about its marginality, embarrassed by its serious works and insecure about its commercial appeal. In the opening number at the 2019 awards, the host, James Corden, spent more than nine minutes begging the CBS audience to honor the liveness of live theater, even as he listed the many delightful and far more accessible experiences available on television, including his own CBS talk show. 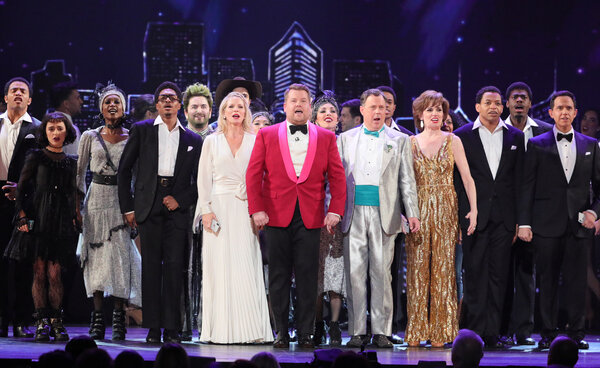 Now is the time for the Tonys to pull their act together. Why should the best show people somehow keep making the dullest, tackiest hodgepodge of a show?

Which is not to say it will be easy, especially this year. Aside from reflecting the disaster of the pandemic, which saw Broadway darkened, its ranks thinned by disease and thousands out of work, the Tonys will have to address, within the context of an entertainment product, the racism long built into the theatrical ecosystem and the recent calls for change. That’s a story not very susceptible to jazz hands.

With so much to do, the announcement that only three competitive awards will be given out within the two-hour CBS broadcast — the other 22 having been relegated to a two-hour preshow on the streaming service Paramount+ — may prove to be good news instead of the abomination it at first seemed.

That’s because pushing most of the awards into one compartment and most of the singing and dancing into another may allow the producers and writers of this year’s show, many of them veterans of previous Tonys, to celebrate both parts of the Broadway package more fully. The gravity and the razzmatazz can each have their say, in their own style, instead of fighting for dominance and airtime, and losing jointly.

There was a time when razzmatazz had no part in the proceedings. In the early years of the awards, which were first televised, to a local New York audience, in 1956, the ceremony was more like a funeral directors’ dinner, with little or no entertainment, extremely brief speeches and some very odd categories. (Best stage technician?) Coaxing potential audiences, especially out-of-town ones, to see a Broadway show was not on the agenda, and television itself, blurry and black-and-white, was no competition anyway. The point was merely to honor the honorees.

Now we accept that the Tonys are an industry marketing tool, the honorees merely bait.

That can be fun, and even powerful, when staged with the wit and intelligence that the best musicals apply to the uneasy relationship between art and commerce. In recent years, numbers from “Fun Home” (2015) and “The Band’s Visit” (2018) were so beautifully conceived for the camera — largely by their original directors, Sam Gold and David Cromer — that without any loss of seriousness or subtlety they demonstrated why people might want to see the shows in the first place.

And with enough savvy, even a crushing loss could be expressed in prime time, as when students who survived the 2018 massacre at Marjory Stoneman Douglas High School sang “Seasons of Love” from “Rent” on that year’s telecast.

But for the most part, recent musicals appear in a poor light compared to the classics of past Tonys, not because they are necessarily worse but because the old telecasts often cushioned their selections in context and let you get to know their characters. Plays have it even worse: They are barely permitted to present themselves at all. “Choir Boy,” in 2019, was the exception that proved the rule, intercutting spoken elements of its story with a thrilling version of “Rockin’ Jerusalem.”

Finally, at the bottom of the pecking order, come the artists, starting with leading actors, then supporting actors, then directors, choreographers, composers, book writers, designers and, well, does anyone remember the last time we got to hear an orchestrator say more than four words on television?

All of this can be improved in a split show. With its increased total time of four hours — and especially this year, with fewer categories and nominees than usual — the ceremony can honor the plays with meaningful excerpts, and the people who actually make the work with recorded segments that help us see what they do. The entertainment segment can likewise be given more time to breathe, allowing drop-dead production numbers and quieter, more intimate moments to create a rhythm more like the experience you actually get on Broadway.

And if the Tonys would deign to take some pointers from the creators of the Antonyo awards, which in the worst of the pandemic managed to honor Black theater artists with dignity and warmth — or for that matter, this year’s surprising Grammys — they might remember that what they’re trying to promote, especially now, is human connection. The smarmy introductions and whirligig graphics and general aura of hectic oversell could be replaced with a more confident statement of what theater, at its best, has been and can be.

I’m afraid that means some drastic changes. First, let’s get rid of hosts whose Broadway cred comes mostly from untutored enthusiasm and the wishful thinking that they might boost ratings. (It never works; for years, the show has drawn only 6 million to 8 million viewers no matter what — and recently even fewer.) Homegrown talent — Billy Porter? Meryl Streep? — will do nicely, thanks.

And while we’re at it, let’s get rid of the overcaffeinated television directors, editing as if to induce convulsions and framing all scenes as if they were sitcoms. Recent highlights have repeatedly shown what should be obvious: Theater directors make the best televised theater.

Not that Broadway’s identity crisis is going anywhere, even if we achieve the Best Tonys Ever. But to get to a healthier, more entertaining place, the American Theater Wing and the Broadway League, the organizations that present the event, have to stop favoring the commercial side so fawningly. Producers of individual shows should not be allowed to shape any content but their own; otherwise, the telecast winds up being hijacked by beamed-in celebrities singing songs from terrible musicals no one’s yet seen.

And as for those stage-swarming investors? Let’s ban them too. The awards they bogart belong to the authors.

In other words, let the artists be in charge. Money may talk, but it doesn’t sing.