Rumors of New York’s demise are exaggerated. The other day more than 160 business leaders wrote Mayor Bill de Blasio about “widespread anxiety over public safety, cleanliness and other quality-of-life issues.” The city is in many ways back to life.

But City Hall had been running low on leadership and good ideas before the pandemic. New York needs them both now.

So it was, in a sense, good news that the nonprofit Trust for Governors Island released a proposal on Monday to rezone disused parts of the island, long set aside for economic redevelopment.

It’s an aspirational plan, more than anything. The goal, which has been circulating for a while, is to incubate a new climate research center. Similar ideas have been advanced for decades on Governors Island. There was once talk about a global health center. In 2002, City University of New York was rumored to be contemplating a campus. The governor and mayor talked about renaming the place CUNY Island.

This time there’s not even a specific tenant in mind, just a desire to attract one. Still, change starts somewhere. The current rezoning proposal begins a city land use review process starting next month. 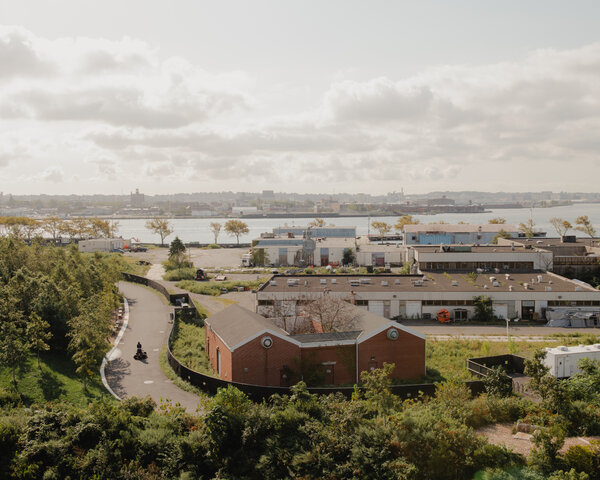 I’ve seen renderings by WXY, the excellent New York architecture firm. They’re rosy advertisements for hypothetical construction. But they give a sense of the scale and potential of the concept, which in this case could entail as much as four or five million square feet of new development.

According to Clare Newman, the president and chief executive officer of the trust, the prospective climate center would offer public programs, offices for green tech companies and architecture and engineering firms, and be anchored by a university or research institute that would build and pay for its part of the campus.

In recent years, Governors Island has become one of the city’s quiet marvels. For several summers, my younger son has attended a kind of “Lord of the Flies” day camp there that’s basically a junk yard with hammers, nails and hands-off instructors. Eight minutes by ferry from Brooklyn and Lower Manhattan, the island feels a world apart, a mini 19th century New England village with Adirondack chairs and food carts, smack in the middle of New York Harbor.

The Lenape called it Pagganck, or Nut Island. The Continental Army used it to defend against a British naval assault; the Union Army, to imprison captured Confederate officers. Until 1996 it was a Coast Guard base, with barracks, a Burger King and bowling alley. By the time the city and state jointly acquired it from federal authorities (for $1) it was a ghost town, derelict and lacking potable water. The city took sole possession in 2010, with the goal of creating open space, cultural and educational programs and mixed-use development.

Leslie Koch, the first president of the trust, oversaw the transformation. Last year nearly a million people from every ZIP code in the city visited. A maritime-themed high school has its home on the island. West 8, the Dutch landscape architecture firm, put together a master plan, which determined where development could go, and converted swaths of open space into spectacular parkland with rolling hills and meadows.

The city has invested some $400 million so far. Like Brooklyn Bridge Park and other Bloomberg-era public-private ventures, the understanding has always been that Governors Island should eventually pay for itself. According to Ms. Newman, it still depends on the city to cover about three-fourths of a $20 million annual operating budget. With tax revenues cratering, who knows how long that will last.

Of course many universities are also facing a cash crunch because of the pandemic. Not many may be looking to expand at this moment.

But history can be useful here. Rockefeller Center broke ground at the start of the Depression; Lincoln Center, when thousands of New Yorkers were fleeing to the suburbs. The obvious precedent to the Governors Island proposal, the Cornell Tech campus on Roosevelt Island, was hatched during the last recession.

And, after all, it was in the wake of 9/11, when doomsayers predicted the end of tall buildings and the abandonment of New York by big businesses, that city leaders plotted an economic turnaround, which precipitated an unprecedented boom in skyscraper construction.

Now the West is ablaze. A Washington Post story this week describes two glaciers in Antarctica whose imminent collapse could raise global sea levels 10 feet. Covid-19, and America’s feeble response to it, dominate the headlines — but what has the pandemic proved if not that apocalyptic threats, man-made or otherwise, require preparedness, coordination, public education and fresh thinking?

There’s a clear climate risk to building a climate research center on the waterfront. The trust counters that the island is, in fact, an ideal petri dish and laboratory for climate adaptation. It’s an argument. Part of the ingenuity of West 8’s design was to strategize protections that worked during Hurricane Sandy.

Alicia Glen, a former deputy mayor, who now chairs the Governors Island Trust, cites the hopeful case of Robert Moses. Three-quarters of a century ago he helped persuade the United Nations to locate its headquarters in the city. That coup insured New York would be at the center of the conversation about humanity and survival in the postwar era. It also brought economic development to the city.

These days any new development is a call to the barricades for many New Yorkers. Those who love Governors Island as it is now may well ask whether even a do-good project is really necessary. A better question might be: Will whatever gets built there — if anything does — live up to the design standards of the changes so far?

In terms of remaining obstacles, the “elephant in the room,” as Ms. Newman, the trust president acknowledged, is transportation. Access to Governors Island is still by irregular ferries. Proposals to extend the No. 1 train line, install a cable car, even build out Lower Manhattan, have all surfaced over the years.

Increased ferry service to beefed up piers seems the easiest solution. It would require yet another capital outlay by the city.

To judge from West 8’s master plan and WXY’s renderings, the good news is that existing parkland can be integrated with mostly low-rise development to preserve open spaces, repurpose historic buildings and turn the island into a kind of green Epcot, with a campus that could serve as both a research hub and a showcase for the latest resilient technologies and materials.

Architecturally speaking, everything will come down to the details — and the as-yet-undetermined tenant(s).

Meanwhile, here’s hoping the rezoning passes city muster. Planning the future of New York is what we need now. It involves many steps. This is a small but useful one. We need more.