Norma Desmond was right, the pictures got small. Once cinema filled your field of vision, but in this century, as ever cheaper digital displays have replaced projection technologies, we have grown accustomed to smaller and smaller movies. The old movie palaces, with their 50-foot silver screens, have mostly shut down. The multiplexes are in trouble. You probably watched your last movie on a 55-inch TV set, a 21-inch computer monitor, or, feel free to admit, a 6-inch cameraphone screen.

But in the 1960s, experimental artists and filmmakers were convinced that the future for cinema wasn’t to shrink down; it was to scale up, spread out, and get off the screen entirely. They wanted an expanded cinema — the term is Stan VanDerBeek’s — that could be projected in empty lofts and packed nightclubs, on multiple screens or on moving backdrops, and which implicated viewers’ bodies as much as their eyes.

Expanded cinema was a global phenomenon, practiced and theorized by pioneers such as VanDerBeek and Robert Breer in New York, Malcolm Le Grice and Lis Rhodes in London, Valie Export in Vienna, Hélio Oiticica in Rio de Janeiro. And whether they projected high-minded abstractions or hippie-conversant psychedelia, these experimental film artists had a ’60s optimism that new media could shape a new society and a new consciousness.

Some of the most significant work took place in Tokyo, where a coterie of young, cheeky, countercultural artists pushed the movies off screen and into real life. Right now New Yorkers have a rare opportunity to discover painstaking restorations and recreations of projected artworks by three of the most significant names in Japanese expanded cinema. The most impressive is at the Museum of Modern Art, which is staging the first American museum presentation of the multimedia artist Shuzo Azuchi Gulliver. His “Cinematic Illumination,” first installed in a Tokyo nightclub in 1969, now infuses MoMA’s new double-height Studio with a festival of projected imagery, flickering lights, long hair and rock ’n’ roll.

The screen is a 360-degree ring on which 18 slide projectors, positioned on a suspended central bollard, throw up a sequence of more than 1,400 scenes that envelop you in the hipster substratosphere of ’60s Tokyo. The slides cycle past close-ups of the young artist’s face as he smiles or smokes, through trippy poster art and a beaming Marilyn Monroe, to Tokyo street reportage shot in the gritty style known in Japanese as are-bure-boke: “rough, blurred and out-of-focus.” One subject repeats throughout: a shadowy young man, standing on a gangway, strides through a scrubbed white space, his features rendered invisible through backlighting.

A disco ball bespittles the circular screen with a thousand points of light, while the click-and-clack of the slide projectors provides a beat. And a continuous soundtrack of American, British and Japanese guitar rock completes the installation, soldering the images and light effects into an immersive total work of countercultural dreamland. Tokyo commuters stride past as David Bowie drones through “Space Oddity,” and rail-thin hippies laugh and smoke to the tootling of Jefferson Airplane. 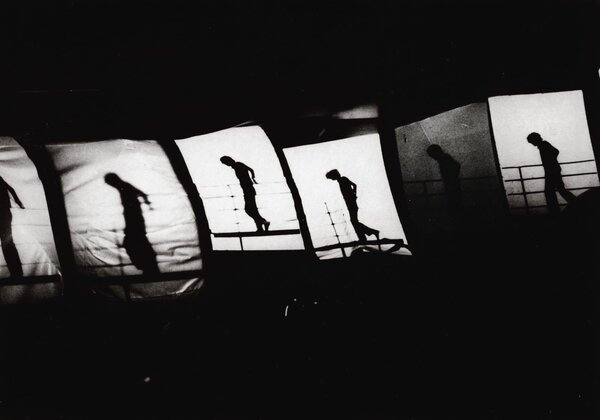 Though these are still projections, they become “cinema” through the performative choreography of the flickering projectors and disco ball — which, like the spinning slits of an old-style zoetrope — produce the sensation of moving pictures. Colored gels, too, pop up and down in front of the projectors, tinting Tokyoites and the faces of MoMA spectators with soft green, blue and red light. What you feel, after half an hour or so, is the youthful certainty of an artist and a generation taking its new prosperity for a test drive, for whom partying could be the most valuable freedom of all.

The mid-to-late ’60s saw a particular vogue for multiscreen projections at World’s Fairs and other public amusements, where companies who could foot the research-and-development bills pitched their corporate visions of the future. (Think of the Eameses’ 22-screen “Think,” made for IBM, which spectators at the World’s Fair of 1964 in Queens watched while strapped into a moving “people wall” — or the mirrored and smoke-clouded screens that populated Expo ’70 in Osaka.)

Gulliver’s “Cinematic Illumination,” by contrast, was done on the cheap, and made a virtue of the projectors’ limited abilities. It dispensed with start and end times, and with fixed spectatorial viewpoints. It left the viewer free to construct one’s own cinematic experience — or to just let the images wash over oneself, to get drunk and dance.

Mr. Azuchi was only 19 when he made “Cinematic Illumination.” He was born in 1947 into a ruined, Americanizing Japan, and before he was out of his teens he was joining in happenings and performances with The Play, an Osaka-based collective. (He took the sobriquet “Gulliver” during those teenage years, and uses it now as an artist’s name.) He hitchhiked to the capital in 1967, where he presented experimental movies both in art centers and in nightclubs. One was Killer Joe’s, a hipper-than-hip Ginza discothèque whose patrons were encouraged “to drown ourselves in love and liquor.” “Cinematic Illumination” was a one-night-only event.

But the nightclub’s Stones-listening, Sartre-quoting revelers were hardly uncritical lovers of the West. Tokyo in 1968 and 1969 was a city of barricades, as students shut down Tokyo University and occupied the streets of Shinjuku in protest against the Vietnam War and the U.S.-Japan security treaty. You can get a fuller sense of the political and cultural ferment at Pioneer Works, in Brooklyn, where other restorations of Japanese expanded cinema, by two filmmakers a decade older than Gulliver can be seen by appointment.

One is Motoharu Jonouchi, a leading voice in Japanese avant-garde film, who began to pivot to expanded cinema techniques during an earlier outbreak of student protests. His “Document 6.15,” first made in 1961-62 and now reconstructed from a negative, edits together black-and-white footage of students affiliated with the Zengakuren, Japan’s left-wing student movement. There are horrible close-ups of a bloodied protester, his head crushed to the concrete by an officer’s club; rain falls on the Diet, and cars burn in front of “Welcome Eisenhower” posters. Still, the silent, digital reconstruction here only hints at the lost original of “Document 6.15,” which Mr. Jonouchi initially screened with blasting audio and balloons floating in front of the screen.

The other filmmaker is Keiichi Tanaami, whose expanded cinema — also screened at Killer Joe’s — prefigures his later, Peter Max-ish blend of art and commerce. His two-screen short “4 Eyes,” with nude pin-up girls and patterns of pink and white dots, is a rather thin piece of psychedelia. More intriguing is “Human Events,” which chops a nude model’s body into disconnected parts across two screens. But it, too, is missing accompanying music and performances, and you can only get a hint of its original countercultural force.

The fragmentary nature of the restorations at Pioneer Works makes it a show mainly for specialists. But it’s worth the timed-ticket wait to view Gulliver’s “Cinematic Illumination,” whose restoration — on authentic, discontinued analog slide projectors — represents a major achievement by MoMA’s media conservation team and by Sophie Cavoulacos, an assistant curator of film, who organized the presentation. (Both shows have arisen from a partnership of scholars and curators called Collaborative Cataloging Japan, committed to preserving expanded cinema.) Gulliver’s work hits especially hard now, in a moment where America is as agitated as late ’60s Japan, but where no equivalent experimentation in art is taking place. Hard to imagine that once upon a time, in Tokyo or in New York, the kids made their own revolution.