SEA RANCH, Calif. — It was an era of now unimaginable optimism, when one believed that architecture and planning could save the world — or at least save the environment. In 1964, a group of architecture faculty at the University of California, Berkeley, some only in their 20s, were entrusted by developer Al Boeke with ten miles of magnificent California coastline three hours north of San Francisco.

For an exhilarating historical moment the energies of postwar suburban development, an emerging ecology movement and Modernist architecture found a common purpose: transforming a 5,200 acre sheep ranch here into a progressive residential community, built in a way that was not only in tune with nature, but driven by nature.

The Sea Ranch came to be “the California architectural monument of the 1960s,” in the words of the design historian David S. Gebhard. Its first important building, the 1964 Condominium One, with its signature slanted roofs and open interiors, would make it onto the National Register of Historic Places. The Sea Ranch’s early unpainted wooden houses were minuscule in size, their charming and inventive architecture deliberately veiled by trees. Yet by 1965, a “Sea Ranch style” had taken the international design world by storm.

And in the following decade, its particular combination of the shed roof, the window seats and ladders, the ingenious overhead spaces for outlooks and skylights as well as sleeping, would be thoroughly absorbed by the mainstream. 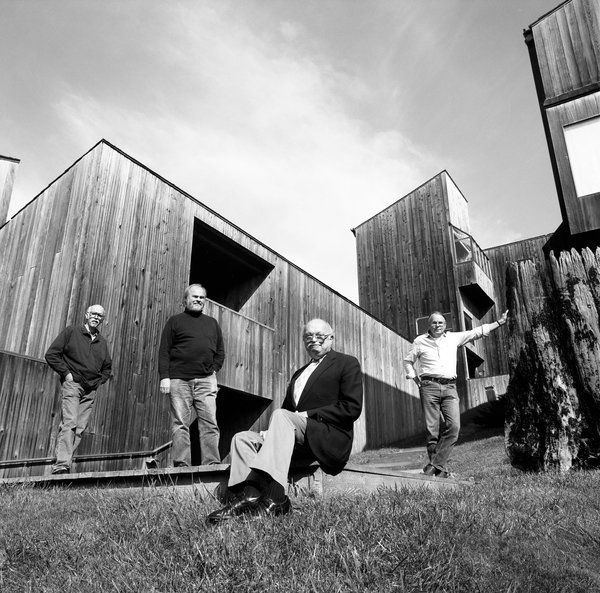 The community’s formative period effectively ended in 1976 with a building moratorium imposed during a legal battle over access to California’s publicly-owned beaches. When it was lifted in 1983, pent-up demand meant more people, as the developers increased density in some areas. Then came the internet, bringing new arrivals who were not weekenders and retirees, but working people. Today, with 1,769 houses, set closer together, and used more of the year, can this one-time beacon of Northern California experimentalism still offer lessons to the world?

Gabriel Ramirez, 57, a new homebuilder, spent five years looking up and down the California coast for a lot to buy, starting in Malibu. “The Sea Ranch still has an unspoiled quality that makes it unique,” he said. “No other place gave me the same sense of living close to nature, though it takes a community effort to preserve that.”

One evening this spring, a sold-out program at the San Francisco Museum of Modern Art brought together one of Sea Ranch’s founding architects, Donlyn Lyndon, 83, considered the de facto conscience of the community, with Mary Griffin, the collaborator and widow of William Turnbull, who has carried on their firm’s work here. They discussed what lies ahead.

“Sea Ranch is changing, like our society,” Ms. Griffin said. “We simply can’t build the way we did even 20 years ago.” She ticked off from the checklist of societal change: “The internet, demographic shifts, climate change.”

On the screen flashed a photo of one of her firm’s houses engulfed in flames. It was not at Sea Ranch, but one county over, in Napa, but it made her point. “With Northern California — well, actually all of California — burning up,” said Lisa Dundee, an architect and longtime director of the Sea Ranch Association’s powerful Department of Design, Compliance and Environmental Management, “we’ve really had to challenge ourselves to find alternatives to our traditions.”

It had been 15 years since I was at the Sea Ranch and what Ms. Griffin said made me curious. One sunny day recently, we drove up here together to see houses she considers predictive of the future.

I met her firm’s clients Ludwig Lin and Kieron Leslie, San Francisco physicians in their 40s with busy hospital schedules. They had decided against cladding their new house in Sea Ranch’s ubiquitous wood, choosing a cement fiberboard that is both fire-resistant and low maintenance. Dr. Leslie, born and educated in England, is an architecture and history enthusiast who has enormous respect for the community’s early buildings. “But I wanted something more modern aligned with our lifestyles,” he said.

Their house, Skyfall, clearly departs from classic Sea Ranch rusticity. On the outside, I admired the crisp detailing of gray fiberboard interspersed with floor to ceiling windows, with wood used “preciously,” in Ms. Griffin’s words, as an accent. Inside, there is a clean loft-style feeling with concrete floors concealing radiant heating. But from a distance, the buildings’ simple gable form has the silhouette of a Northern California barn, among the inspirations for the design guidelines for height, size, and other features written in 1965 by the attorney Reverdy Johnson.

Next, we visited the new concrete and Cor-Ten steel house that the architects Norman Millar and Judith Sheine designed for Dr. Ramirez. A radiologist who works out of this house, Dr. Ramirez called fire safety “paramount.” As an architecture buff, he wanted his new home to embody the natural aesthetic that inspired him to build at the Sea Ranch in 2012, even before the recently installed fiber optic service he joined in 2016 enabled him to work here. “There’s no paint, no plaster,” he said about the house. While its style doesn’t conform to the governing standard of the barn and the shed, its mix of fire-resistant materials does repeat their familiar colors and textures. “The concrete has the wood grain of the form and the rusty colored metal reminds me of the old barns up here,” he said.

Trees were key to the science-based approach of Lawrence Halprin, the master planner. Ms. Dundee estimates they planted 100,000 pines on the property, with 10,000 expected to survive. New Monterey cypress were added to the hedgerows built as windbreaks by early day ranchers. “It was very important to the founders that architecture and the land be integrated through the use of trees,” she said.

Mr. Halprin’s handling of the hedgerows and meadows is the Sea Ranch’s most original and progressive idea. Houses were backed up against the hedgerows, not just to be sheltered and unobtrusive, but to allow views toward the Pacific. Where hedgerows did not exist, clustering houses and vegetation achieved similar ends, so that 50 percent of the land could be preserved as commons. As a respite from the conspicuous consumption associated with suburban developments, the Sea Ranch was intended to be communal and inconspicuous.

But idealistic practices of the 1960s can now be at odds with sustainable building. No one knows this better than Ms. Griffin and her partners Eric Haesloop and Stefan Hastrup. Their clients Chris Foss and Kate Stone Foss, owners of the Rush House, a 1970 icon designed by Charles Moore and William Turnbull, learned that the Monterey cypress trees they admired were poised to fall or spread fire. A few trees had to go. While some stumps were painful to behold, the felled cypress were milled and reincarnated as the benches we were sitting on.

Mr. Foss is a product designer at Apple and Ms. Foss is a former photography director at Dwell magazine. In their 40s, with two sons, they represent a demographic shift at the Sea Ranch toward a younger, professionally engaged population, including families with children. In 2013 they bought one of Sea Ranch’s most beloved houses, but it was only 1,000 square feet (it had cost $25,000 to build). Where would they put everyone?

Initially, the Fosses thought to enlarge the house. But they gradually decided against changing its famous playful interior, its surprising overhead windows, library nooks, hidden bunk beds, ladders, and fireman’s pole just as they were 50 years ago. To gain space, they added two free-standing sheds, one jokingly called the “outhouse”.

“We like the idea of exposing our kids to new ways of thinking about simple things like taking a ladder when you need a book, or walking outside barefoot on gravel to get to the bathroom,” Ms. Foss said.

Some new residents believe it is warm enough for outdoor living, and ask their architects for decks and patios. Their optimism stands in contrast to the warnings in the original 1963 Sea Ranch sales brochure: “The terrain is rugged, the surf treacherous, the ocean cold.”

As we drove past the newer more densely built northern end of the Sea Ranch, I asked Ms. Griffin what happened to the ideal of inconspicuousness so dear to the founders. The community is 80 percent built out and many remaining lots are in direct view of neighbors.

She took me by the home she and her partner Mr. Haesloop designed for Anne Evans, a fiction writer and emeritus director of the Napa Valley Writers’ Conference. When Ms. Evans bought her lot, she dreamed of outdoor living, but adjacent houses are just a few yards away. The architects’ solution was splitting the Evans House into two small buildings, with the master bedroom across a deck from the main quarters. They form a discrete shelter for a private outside area. “I sometimes see our future as convincing clients to build smaller,” said Ms. Griffin.

When Buzz Yudell, an architect who carries on founding architect Charles Moore’s Los Angeles firm Moore Ruble Yudell, looks ahead, he is encouraged by the attitude of this generation of homebuilders. “With recognition of our environmental emergency,” he said, “it’s as if the world is finally catching up with the goals of the Sea Ranch.” 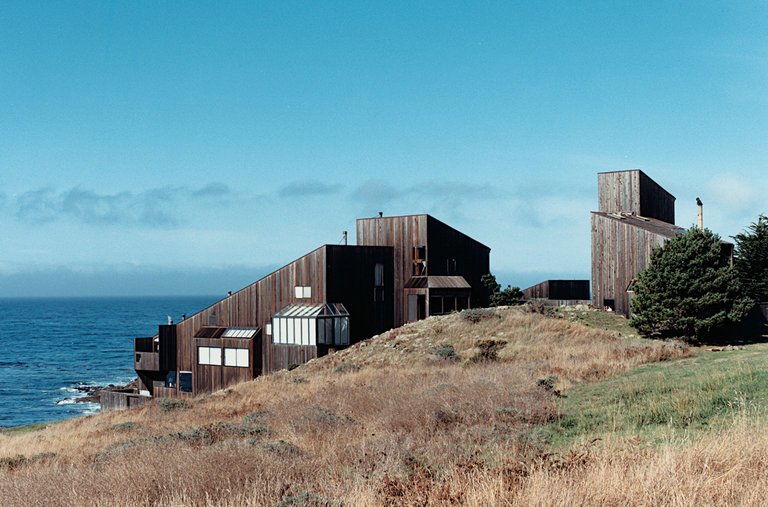 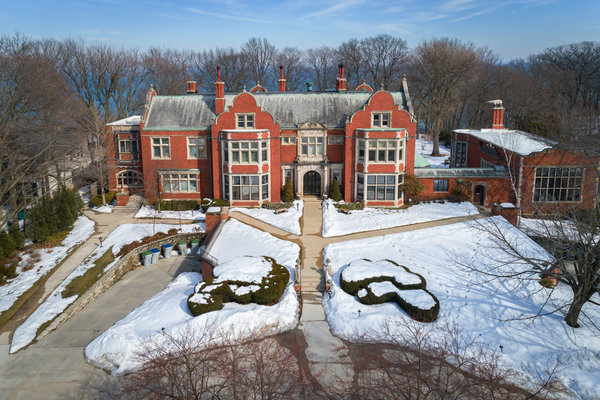