THOLEY, Germany — For Abbot Mauritius Choriol, the new church windows being ceremoniously inaugurated on Saturday at Tholey Abbey are a gift: from God, from two generous patrons and from Gerhard Richter.

The three windows — with deep reds and blues prevailing on the two outer displays and the central one dominated by radiant gold — are made in stained glass to a symmetrical design by Mr. Richter, the revered German artist.

“Abstract art is not normally my thing,” said the abbot, who oversees Tholey Abbey. “But you don’t need to be an art expert to appreciate the qualities of these.”

In the days since the installation was completed on Sept. 10, the abbey’s monks have been able to enjoy the windows in peace. But if all goes according to plan, that will change: The windows, at more than 30 feet tall, play a key role in the monks’ plan to secure the abbey’s future by turning it into a center for hospitality and education. 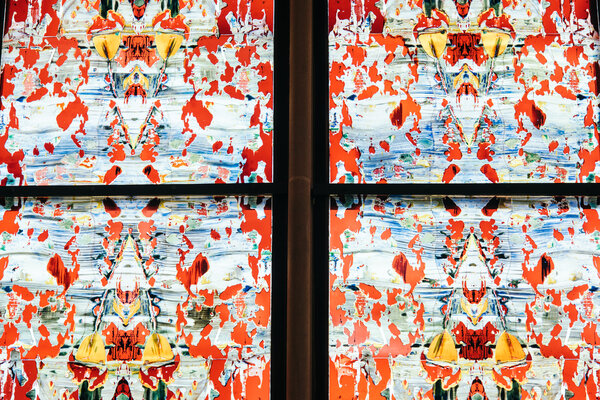 From October, the abbey grounds will be open to the public six days a week. A report commissioned by the monks said that the new work by Mr. Richter could attract up to 100,000 visitors by next September.

In addition to Mr. Richter’s windows, the abbey commissioned Mahbuba Maqsoodi, an Afghan-German artist, to create 34 more windows for the church. Her figurative images portray saints and scenes from the Bible.

Tholey is the oldest working abbey in Germany. The first surviving document that mentions it dates from A.D. 634. Situated in tranquil green hills near the borders with France and Luxembourg, the abbey is home to 12 Benedictine monks who meet five times a day to pray. They also grow fruit, keep rabbits and chickens, and make quince schnapps, honey and jam.

Twelve years ago, the abbey was near to closing. The garden was a jungle, the windows were drafty, the walls were damp, and the abbot at the time was tired of his job, according to Abbot Choriol.

“It was in a very sorry situation, financially and in personnel terms,” he said.

Then, in 2008, a pair of wealthy benefactors stepped in. Edmund and Ursula Meiser, a local businessman and his wife, who are both committed Catholics, first offered to build a fence around the abbey’s garden. They then paid for a renovation of the chapter house, built a new gate and restored a baroque pavilion on the abbey grounds.

In 2018, the monks and the Meisers turned their attention to the abbey church, whose corroded windows were “flaking away like pastry,” the abbot said. They set up an anonymous competition for an artist to redesign most of them, which Ms. Maqsoodi won.

Yet the monks also wanted a work by a famous artist for the church’s choir windows, a focal point behind the altar, where the morning sun shines through into the nave. Abbot Choriol said their inspiration was the cathedral windows in the nearby city of Metz, France, which are by Marc Chagall and attract thousands of visitors a year.

“But Chagall is dead,” the abbot said. “So we asked, ‘Who is the most famous artist in the world?’ Gerhard Richter sprang to mind. We didn’t think he would say yes. We thought he would politely decline.”

A local organist, Bernhard Leonardy, wrote to Mr. Richter and asked him to create a design. In June, the artist called Mr. Leonardy and left a voice mail message.

“Gerhard Richter from Cologne here,” he said. “It’s about the oldest monastery in Germany. It all sounds wonderful, but I am too busy and simply too old. I don’t think I can do it.” Then followed a 10-second pause.

The monks wrote to Mr. Richter expressing concern that his fee might be too high. After all, an abstract painting by Mr. Richter fetched about $45 million at Sotheby’s in London in 2015. The artist replied to say that he would design the windows for free.

“Not a cent,” Abbot Choriol said. “We were speechless.”

Mr. Richter, 88, declined to be interviewed for this article; his studio said he was not well enough. But in brief comments reported by the German press agency DPA on Wednesday, Mr. Richter said the Tholey windows might be the last entry in the official catalog of his works, which begins with the 1962 painting “Table.” The windows will be No. 957 in the catalog.

Short of a miracle, “that’s it,” DPA reported him saying.

These are not Mr. Richter’s first church windows, however.

A stained-glass structure that he designed for Cologne Cathedral, containing 11,263 randomly arranged colored squares, was met with both criticism and admiration when it was inaugurated in 2007. Cologne’s archbishop at the time, Cardinal Joachim Meisner, caused a furor when he said the abstract design with no direct reference to the Bible was “better suited to a mosque.”

The Cologne window was commissioned by Barbara Schock-Werner, an art historian who was the cathedral’s custodian until her retirement in 2012. She said in a recent interview that the comment by Cardinal Meisner, who died in 2017, had been “the best P.R. possible.”

“There was a big fuss at first, but then the reception was really enthusiastic,” Ms. Schock-Werner said, adding that most visitors find it beautiful. “It has also made the cathedral a destination for people interested in contemporary art.”

With their recurring patterns and intense colors, Mr. Richter’s windows at Tholey Abbey resemble the design of a Persian rug. But not only has the abbey installed a window whose Eastern flair and abstract design Cardinal Meisner may have considered better suited to a mosque, it also commissioned Ms. Maqsoodi, an artist who grew up in a Muslim family.

Ms. Maqsoodi, who was granted political asylum in Germany in 1994, trained as a miniaturist in Herat, Afghanistan, a city famous for its illuminated manuscripts. She first encountered Western art in St. Petersburg, Russia (then Leningrad, in the Soviet Union), where she completed a doctorate in the history of art.

“My art is a synthesis of everything that has influenced and shaped me,” she said recently by telephone from Munich, where she lives.

“It is wonderful to find a place to exhibit that is permanent, and where the doors are always open,” Ms. Maqsoodi said of the abbey, adding that she felt her windows complemented Mr. Richter’s. “The colors,” she said. “I think our works harmonize.”

And the main difference? “No one knows me!” she said. “His name is known around the world.”