Have you experienced the familiar unfamiliarity of dreams? That quixotic sense of déjà vu that comes from snippets of memory, stray thoughts, recurring images stolen from the day or drawn wholly from the imagination — all jigsaw-puzzled together to form a portrait of a feeling, a sensation, a belief or fear.

Call Adrienne Kennedy the master dream weaver. The playwright, best known for the 1964 “Funnyhouse of a Negro,” has a lengthy C.V. of plays and honors, including Obie Awards, a Guggenheim and a spot in the Theater Hall of Fame. Her name crops up in chapters about the Black Arts movement, alongside the playwrights Amiri Baraka and Ed Bullins.

Her otherworldly work deserves its own volume. Yet Kennedy, now 89, is often shelved among the ranks of the “celebrated” and the “influential” who are rarely produced.

That’s part of the incentive behind the Round House Theater’s digital festival “The Work of Adrienne Kennedy: Inspiration & Influence,” featuring the mid-period works “Ohio State Murders” and “Sleep Deprivation Chamber,” the more recent “He Brought Her Heart Back in a Box” and the world premiere of “Etta and Ella on the Upper West Side.”

In a series of austerely staged streaming productions, Round House, based in the Bethesda, Md., area, is showcasing Kennedy’s uncanny ability to capture a sense of untethered Blackness, disconnected from time, space and an immutable identity.

In other words, Kennedy’s Black characters never simply exist in one place, or in one moment. They are cleaved by history, institutionalized oppression and violence, and her narrative structures — full of leaps in time, rapid shifts in setting, constantly changing perspectives and characters who embody disparate identities at once — reflect the complexities of that reality.

If that sounds a bit heady, it’s meant to be. Kennedy’s work is never easy, and by that I mean traditional, with conservative three-act structures and chronological storytelling. 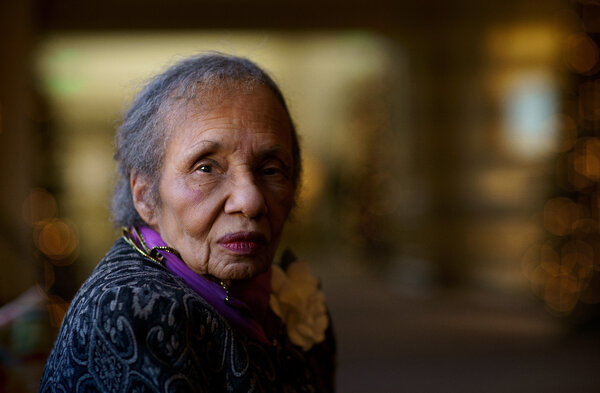 Kennedy rather loves us to watch characters share correspondence, as in “He Brought Her Heart Back in a Box,” which opened at Theater for a New Audience in 2018. This brief one-act tragedy is relatively straightforward: In 1941 Georgia, a young biracial woman named Kay (an elegantly spellbinding Maya Jackson) and a young white man named Chris (a fetching Michael Sweeney Hammond), the son of a landowner who segregated their town, plan to marry once Chris makes it as an actor in New York.

The play consists of the letters they exchanged; Jackson and Hammond read from stands on a stage, and scene changes are indicated by beautifully designed miniatures of buildings and trains which they hold up to the camera.

But the disconnect between Kay and Chris comes down to more than their physical distance; their letters feel like broken conversations, never on the same plane of understanding. Nicole A. Watson’s understated direction captures Kennedy’s love of the fragmentary, shuttling us between Kay’s world and Chris’s — his, earnest and naïve; hers, dreamy and aloof, drawn to the past while living in the present.

One of her fixations: the mystery behind her mother’s death — suicide, or murder? — stemming from her relationship with a white man. All the while, Kennedy notes in her typically precise, poetic stage directions, Kay, on a train ride to visit Chris in New York, is being watched by his father. The ending is a case of history repeating itself.

In Kennedy’s work Blackness exists in a kind of time loop, trapped in the tragedies of the past. It’s why “Sleep Deprivation Chamber,” co-written with her son Adam P. Kennedy, feels prescient — even though it was first produced in 1996.

In the semi-autobiographical work, directed by Raymond O. Caldwell, Suzanne Alexander (Kim James Bey), a writer, professor and Kennedy stand-in who shows up in other plays, recounts when her son Teddy (Deimoni Brewington) was the victim of police brutality and yet accused of assaulting an officer.

The telling of the event is fractured among different perspectives (Suzanne, Teddy, Teddy’s uncle, Teddy’s father, the officer); in different places (Ohio, D.C., Virginia); and at different times — during the incident, during police interrogations, in the courtroom.

Suzanne shares the letters she writes to both politicians and friends in Teddy’s defense, and offers symbol-heavy reveries. Hints of the surreal are suitable for this kind of story, a nightmare from Black America’s past that is also Black America’s present.

The character of Suzanne shows up again in “Ohio State Murders,” from 1992, which begins with her practicing a talk she’s going to deliver about the “violent imagery” in her work. There are two Suzannes in this play, dexterously directed by Valerie Curtis-Newton: one who tells the story today (Lynda Gravatt, a bit shaky on the delivery) and one we see in the past (a younger, poised Billie Krishawn), and Kennedy moves freely between them. Once again, time folds in on itself, as Suzanne recounts an affair with a white professor while she was an undergraduate and the subsequent murder of the infant twins she had by him.

“Etta and Ella on the Upper West Side” is the latest Kennedy work to show how she conflates different characters, places and times. A narrator (the charismatic Caroline Clay, under the subtle direction of Timothy Douglas) sits at a desk on an otherwise empty stage, telling a story delivered in numbered sections, each made up of short sentences and fragments, some of which repeat like a chorus.

Twin sisters, Etta and Ella, both writers, live their lives in double, one accused of mimicking and plagiarizing the other — until one dies and the other is left haunted.

Even at a mere 35 minutes in length, “Etta and Ella” is the most enigmatic of the bunch, and the most blatantly literary: The text isn’t a monologue but is rather just labeled “narrative”; on the page it looks like a work of fiction that often reads like a poem. There are the inevitable Kennedyesque signposts: Etta’s baby daughters are killed “by the English professor who was their father,” who then kills himself — the same tragedy that befalls Suzanne in “Ohio State Murders.”

And Etta and Ella argue because they write the same stories, with the same character names; one is named Suzanne. Are they two individuals or two facets of one person? Is Suzanne the story created by Etta and Ella, or are Etta and Ella products of the mind of Suzanne?

Are they all one, like the protagonist in “Funnyhouse,” who can somehow be Queen Victoria and Jesus and a real Black woman living in the 20th century, all at once?

And who are all of these women in relation to the real story of the ever elusive playwright?

In the very structure of her interrelated works, Kennedy refuses a singular definition of Blackness. The only constant is violence, because Blackness in America is a condition of violence — an identity splintered by a culture that declares it at best irrelevant and at worst dangerous.

So she crafts this condition into a language — broken and free-floating and multitudinous — and speaks it back to her audience. Occasionally it’s a bramble, in its dreaminess more sensation than sense. But often it’s a bold rendezvous with truth. And in a country where whether Black lives even matter is up for debate, truth is never as simple as we’d hope.

The Work of Adrienne Kennedy: Inspiration & Influence
All shows streaming on demand through Feb. 28; tickets available through Feb. 21; roundhousetheatre.org