Times Insider explains who we are and what we do, and delivers behind-the-scenes insights into how our journalism comes together.

For the past year, The New York Times’s Kabul bureau and The Times Magazine’s At War channel have published weekly reports from the war in Afghanistan, documenting all significant security incidents from the previous seven days. The project began in September 2018 as a way to create more transparency around civilian and security-force casualties, since this information was being routinely suppressed by the Afghan and American governments. 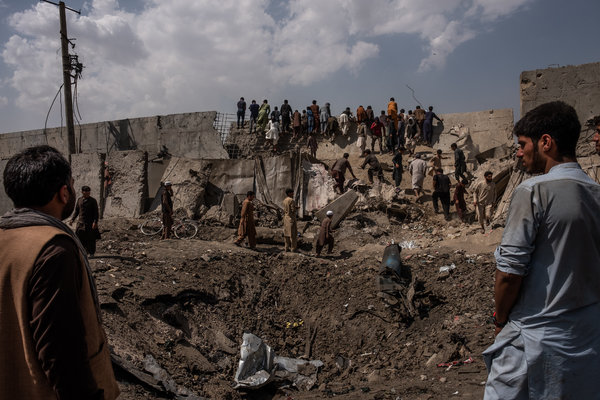 Fahim Abed and Fatima Faizi, two Afghan journalists who write the reports, reflect on what they’ve learned from a year of tracking these deaths and injuries.

Fahim: Tracking casualties among Afghan forces and civilians is incredibly difficult. Right now, The Times is the only organization that tracks both (the United Nations monitors civilian casualties). For me, it was an important issue because I thought there should be a record of those dying in this war — something we haven’t had in the past. Only in November 2018 did the Afghan government acknowledge that more than 28,000 Afghan police officers and soldiers had been killed since 2015.

Every week, our team of five reporters and stringers in Afghanistan collects tips and stories from social and local media of security incidents. To verify them, we first call the provincial police or provincial governor’s office for details. If we aren’t getting consistent information, we also reach out to hospitals, provincial councils and so on. The casualty reports also include claims of Taliban casualties, but it’s impossible for us to independently verify those claims. Taliban officials do not give out their own death tolls, or do not do so credibly, while on the government side, many officials give out inflated numbers.

Fatima: Sometimes it is a lot of work to verify a single incident. When the Taliban spokesman claims that there was an attack, I call my colleagues in the provinces and ask them to check. They go to their sources. Sometimes it takes 10 calls to get one confirmation.

Fahim: The province with the greatest number of casualties we’ve verified is Kunduz, in the north, where there were more than 405 deaths over the past year, followed by Badghis, in the northwest, and Farah, in the west along the border with Iran. Kunduz has been a hot spot for years, but before 2016 the other two provinces did not see a lot of Taliban activity. With the Taliban and the Americans in peace negotiations for much of the past year, it felt like the Taliban was trying to demonstrate its reach by targeting regions historically controlled by the Afghan government.

Fatima: Another thing we noticed, particularly in the last six months, was that 87 percent of the combat deaths among security forces that we tracked happened during Taliban assaults on military and police bases, outposts, checkpoints or command centers. The number of deaths during Afghan security offensives was pretty small.

Fahim: In several cases, after an attack, the government sent the wrong bodies to the families. At least once they sent a body to a family whose son hadn’t even been killed; instead he was in Taliban custody.

Fatima: Reporting on Afghanistan, especially filing this report every week, can sometimes take a toll on me. One week in July, the death count was nearly 200, which was higher than average. A few minutes after I finished compiling our dispatch, our regional reporters called to say that there were more incidents to include. I spent two hours adding casualties that my colleagues had verified last-minute. My head felt so heavy, but I couldn’t sleep. The numbers were just too large for me to process. At the end it was 322 people: 264 security force members and 58 civilians. Three hundred and twenty-two isn’t just a number; it’s 322 families.

Fahim: Once I dreamed about an outpost that was under attack by the Taliban in Faryab Province. In my dream, soldiers were calling us to tell officials to send reinforcements. In another dream, I saw soldiers being slaughtered by the Taliban at an outpost. Twelve bodies were lined up in a row for the funeral.

Fatima: Two months ago, I met the defense minister and showed him one of our published casualty reports. He had never seen one before. It left him speechless. These reports seem to be the only recognition of loss the Afghan security forces receive.