LONDON — In the pop music world, Alan Rogan carried a certain star power all his own. He was a much-sought-after British guitar technician who worked for some of the biggest names in rock.

But of all the tasks he was hired to do, none was as unusual or as difficult as the one he had as a fixture in the entourage of the Who.

For decades it was his job to repair the expensive electric guitars that the band’s leader, Pete Townshend, smashed onstage as part of his act, often attacking his amps with an anarchist’s gusto as his fans cheered.

Enter Mr. Rogan — “with Super Glue, Band-Aids, wire, whatever I could lay my hands on,” as he put it — to patch up the instruments.

Sometimes, however, with all that smashing about, they were beyond repair, and Mr. Rogan had to revisit some of the world’s best guitar shops and guitar makers to replace them.

“Pete’s a little bit rough on guitars,” Mr. Rogan said with dry understatement in a 2008 interview. “He’s very physical with them. He’ll use them until he’s killed them.”

Mr. Rogan died of cancer on July 3 in a London hospital. He was 68. Three days later, during a sold-out concert there at Wembley Stadium, the Who acknowledged his death in an emotional tribute, showing a giant photo of him at the back of the stage until it faded to black.

The Who represented Rogan’s main gig for the better part of his life. But he was a freelance guitar technician, as he was called, and when the Who was not recording or touring, he had other clients to tend to.

They included the Rolling Stones, George Harrison, Eric Clapton, Tom Petty, Jackson Browne, Graham Nash, Cat Stevens, AC/DC and Aerosmith. Also on his roster were Slash, of Guns N’ Roses; Stevie Van Zandt, of the E Street Band; and his good friend Joe Walsh, who has played for several bands, including the Eagles.

Mr. Rogan was the guitar technician when Mr. Clapton appeared before a London audience in 1992 on “Unplugged,” MTV’s all-acoustic music series. The performance was made into an album and a DVD.

He also befriended Mr. Harrison. In 2002, a year after Mr. Harrison died of cancer at 58, Mr. Rogan helped Mr. Clapton and Mr. Harrison’s wife, Olivia Harrison, organize the memorial “Concert for George” at the Royal Albert Hall in London featuring Mr. Clapton, Mr. Petty, Paul McCartney, Ringo Starr and many others, including Mr. Harrison’s son, Dhani. (That concert also became an album and a DVD.) 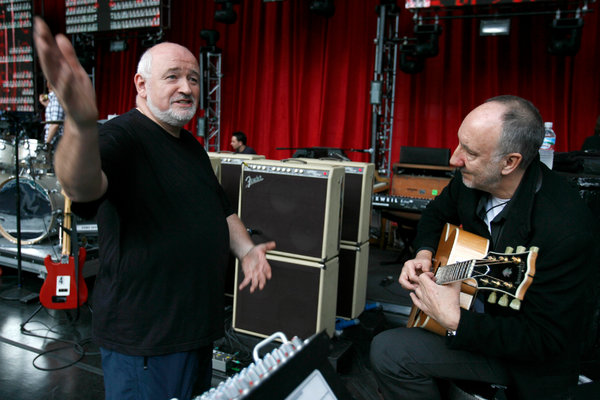 But his closest and most enduring association was with the Who. His main tasks were to find the best and rarest guitars for Mr. Townshend, get them on site for gigs, tune them onstage as Mr. Townshend switched between them, and patch them up after they were smashed.

His official title with the Who was guitar technician, but he was more than that. Brian Kehew, an American keyboard player and a touring technician with the band, said Mr. Rogan had handpicked much of the Who’s road crew over the years.

Mr. Townshend regarded him as his fixer, chief roadie, bodyguard and even mentor, although he was younger than Mr. Townshend. He also earned credit as a co-writer of Mr. Townshend’s song “The Sea Refuses No River,” which appeared on a Townshend solo album in 1982.

In a tribute on the Who’s website, Mr. Townshend described him as “my guitar tech, friend, saviour and good buddy.”

Mr. Townshend considered Mr. Rogan a savior because Mr. Rogan helped him get and stay sober in the 1990s after years of alcohol abuse. Drugs, alcohol or a combination had led to the deaths of two of the original members of the Who, the bassist John Entwistle and the drummer Keith Moon.

Mr. Rogan was born on Feb. 15, 1951, to Ted and Mary Rogan in Gateshead, near Newcastle, in northeast England. His father worked in a shoe factory, his mother in the local office of an international advertising agency. Alan left school as soon as he could to get into music.

Mr. Rogan was a talented musician himself, mostly on bass guitar. When not working for the Who and other performers, he performed around Britain with his band, BluesClub. Its members have played with, among others, Mr. McCartney, Tom Jones and Roxy Music.

Mr. Rogan’s marriage to Linda Davison in 1970 ended in divorce in 1978. He is survived by a daughter, Kerri Hayden; a sister, Lillian Hall; and two grandsons.

For all his associations with rock royalty, Mr. Rogan was never star-struck. Mr. Kehew wrote on the Who’s website that Mr. Rogan had been “at home in a world of music legends and ‘big rock stars,’ as he had confidence and a sparkling persona that could keep up with the best of them.”

All the while, Mr. Kehew noted, Mr. Rogan had “dodged a few flying guitars in his life.”