Beginning at the age of 50, the beloved veterinarian James Alfred Wight led a double life. By day, he tended to animals in and around the English village where he lived, and in the evenings, writing under the pen name James Herriot, he chronicled his experiences, both past and present.

The resulting eight books sold more than 60 million copies worldwide and inspired multiple film and television adaptations, the latest being “All Creatures Great and Small,” the finale of which airs Sunday on “Masterpiece” on PBS. (The series is also streaming via Amazon with the PBS Masterpiece add-on.)

Wight didn’t fully retire until 1989, after 50 years as a vet. (He died in 1995, at the age of 78.) The magic of his stories was that they seemed to be set in a land that time forgot, and their cozy glow is due partly to his blurring of the lines between fact and fiction. (Spoiler alert: It caused some major friction at work.)

But what was Wight’s life really like? Competing biographies — including a heavily researched but still somewhat speculative one by Graham Lord (“James Herriot: The Life of a Country Vet”) and a more detailed but inevitably biased one by Wight’s son, Jim (“The Real James Herriot: A Memoir of My Father”) — make it difficult to verify certain stories. Lord contends that Wight’s tales are mostly either recycled stories he heard elsewhere or wholly apocryphal. Jim Wight — a veterinarian like his father — writes that 90 percent of the stories are based on real cases, even if sometimes they are borrowed from other animal doctors (including Jim).

Can Alf Wight the man be cleanly distinguished from his celebrated stand-in, James Herriot? And was there really a little Tricki Woo who gave him goodies?

In the hunt for answers, we searched out biographical elements on which the two books agree and did some independent research as well, including in our own archives. Disputed details we skipped. Here’s what emerged:

Of war and peace

The stories recounted in Wight’s first two books, “If Only They Could Talk” (1970) and “It Shouldn’t Happen to a Vet” (1972) — which were combined for the American audience as “All Creatures Great and Small” — took place at the outset of World War II, but he relocated them to the more tranquil prewar period. In real life, the author didn’t complete his veterinary studies until late 1939. After the Luftwaffe bombed both Sunderland, the English city where he was born, and Glasgow, the Scottish city in which he was raised, Wight signed up to join the Royal Air Force, even though, as a veterinarian, he was exempt from military service.

While waiting for his R.A.F. call-up, Wight continued work as a rural vet, tending to ailing cows in the middle of air raids. (Or trying to, according to letters he wrote). Donald Sinclair, the model for the character Siegfried Farnon (played by Samuel West), was about to begin his own R.A.F. service and wanted to leave his practice in capable hands. Wight and Sinclair teamed up, but in the early days they were often separated by stints serving their country. (Or trying to; neither made it as a fighter pilot.)

It was a fraught time, and a hungry one. Staples like eggs, butter and bacon were rationed. The delicious perk recounted in the stories — in which grateful farmers feed the country vets — was actually one way the two men eased the pangs of wartime austerity.

In the show, we first see James (played by Nicholas Ralph) as he takes a morning run along the docks in Glasgow. But did people actually jog in the 1930s? Wight did. In 1932, at around age 15, he nearly died of diphtheria and afterward took up an exercise regimen called “My System,” which including running, stretching and regular cold baths (possibly the source of James’s love of skinny-dipping).

Wight’s parents sacrificed a lot to nurse their son back to health and to send him to better schools, so he did all he could to express his gratitude. He sent them money, wrote frequent letters and visited them often. Although his father, James, worked on the Glasgow docks, and his mother, Hannah, had her own dressmaking business, their first calling had been music, and in interviews, Wight described both of them as musicians. They saw themselves as artists, and so did their son. 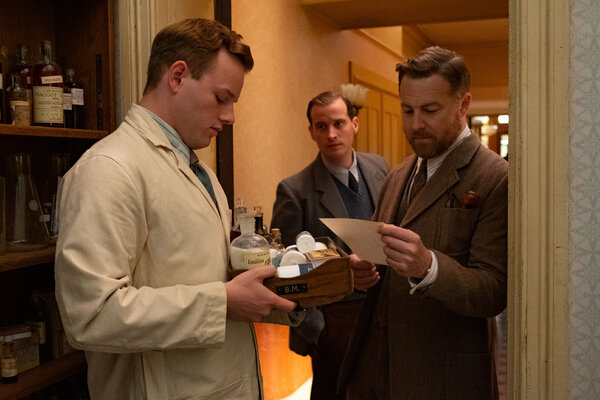 When Siegfried’s younger brother, Tristan (played by Callum Woodhouse), confesses to having failed two veterinary school exams, James expresses sympathy. “You passed them first time, didn’t you?” Tristan asks dejectedly. But in real life, Wight was a lot like his friend Brian Sinclair, the model for Tristan. Wight failed many of his classes on the first try: surgery, pathology, physiology, histology, even animal husbandry (which he failed twice).

It took Wight more than six years to finish the five-year course at Glasgow Veterinary College. This wasn’t because of the usual undergraduate carousing — Tristan’s excuse. His setback was partly because of a debilitating, recurring gastrointestinal problem, which required multiple operations.

Wight didn’t go straight from vet school to a job in the Yorkshire Dales, as in the books and series. He started first at a practice in Sunderland, but finding job security lacking, he began to look for better prospects elsewhere.

Scanning the want-ads one day, he discovered Donald Sinclair’s veterinary practice in Thirsk, in North Yorkshire, England. In the already gruff Siegfried, some of Sinclair’s rougher edges have been sanded down — Sinclair’s real-life behavior was much more eccentric. (He once discharged a shotgun during a dinner party to let his guests know it was time to leave.)

Sinclair was a widower in real life (his first wife, Evelyn, died of tuberculosis), but Wight never mentioned that in his books; the new TV adaptation brings back that oft-neglected nugget. Some of Wight’s historical revisions tested his friendship with Sinclair — like renaming him Siegfried, a German name with Wagnerian echoes that inevitably stirred thoughts of Nazis at the time. Sinclair was so peeved by Wight’s portrayal that at one point he threatened to sue him.

Helen Alderson (played by Rachel Shenton) is the main character least like her real-life counterpart, Wight’s wife, Joan Danbury (outside of their both being the first women in their villages to wear trousers, according to the Wights). Helen is a farmer’s daughter who wishes she had been given a chance to go to secretarial school; Danbury was a secretary. Helen’s mother is dead, which requires her to raise her sister; Danbury’s parents were very much alive during Wight’s courtship, and her mother even lived with the couple for 30 years. Helen isn’t much of a cook, but Danbury’s culinary delights might have earned her a “Hollywood Handshake” on “The Great British Baking Show.”

In the series, James is thwarted by Helen’s beau, Hugh Hulton (played by Matthew Lewis); while Wight did have some competition, there was no one on the level of the dashing Hugh Hulton. (Hulton’s real-life counterpart, Sir Hugh Bell, was 17 in 1941, the year Danbury and Wight met and wed.) In fact, Wight’s main obstacle was his own mother, who objected to the match on financial and emotional grounds. (In family letters, Wight pleaded with his mother to stop talking about his fiancée’s “taking your place.”)

Wight changed names, genders and other identifying features to protect the innocent (and his own reputation), but his son insists that the vast majority of the cases and clients in his books were based on real people (and animals). People didn’t always recognize themselves. One client, Mrs. Bush, told Wight she had taken delight in a chapter “about that man and his pigs,” not realizing that she had been the source.

But what of Mr. Handshaw’s cow, which was first believed to have milk fever, then a broken pelvis — and then recommended for humane slaughter? That was the farmer Billy Goodyear’s cow, which in real life, as in the series, suffered only from post-birthing complications and eventually recovered. Goodyear milked the story for years about the cow who would “never get up n’more,” teasing Wight about the faulty diagnosis.

And what about Mrs. Pumphrey’s overindulged Pekingese Tricki Woo? That was the socialite Marjorie Warner’s dog, Bambi, who pampered humans with hampers of fine foods they couldn’t refuse — with the help of his owner, of course.