HBO’s four-part docu-series Allen v. Farrow has been a haunting look at how a criminal trial can play out in the court of public opinion — sadly enough, the very thing Woody Allen’s defenders would claim is happening to him now. While Allen has never formally been charged with the sexual abuse of his then-7-year-old daughter Dylan Farrow, the series makes it clear that he was also definitively not cleared of suspicion, with a 1993 decision not to go to trial hinging upon Dylan’s mental health needs despite an attorney who found “probable cause” to prosecute Allen. Allen v. Farrow suggests Allen has been celebrated for so long not because of evidence that points towards his innocence, but because of his pre-existing reputation as a beloved filmmaker and his ability to convince media at the time of an alternate version of events. As the series finale airs, one last aspect of Allen’s life that didn’t make it to the doc does seem worth noting as one parses the truth of what happened: his long-standing friendship with convicted pedophile Jeffrey Epstein. 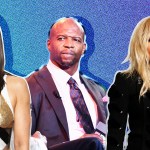 
Celebrities Who Have Bravely Opened Up About Being Sexually Assaulted

Allen, through a statement released by his sister Letty Aronson, has called Allen v. Farrow “a hatchet job riddled with falsehoods,” a general attitude he has adhered to since Dylan first made her allegations known in 1992. What he cannot deny, however, is a friendship with the late Jeffrey Epstein, who was once an esteemed New York City financier with many wealthy, famous clients much like Allen. After a 2008 conviction on charges of procuring a child for prostitution and soliciting a prostitute, to which Epstein pleaded guilty, he saw some of those high-profile friends begin to play down their closeness — but not Allen.

In 2010, Epstein still had plenty of well-to-do callers at his frequent dinner parties, including British royal Prince Andrew, news anchor Katie Couric, and filmmaker Allen, as chronicled in the Daily Mail. Comedian Chelsea Handler described a dinner party she once attended at Epstein’s townhouse with the same group in attendance earlier this year on Rob Lowe’s podcast, recalling an awkward question she asked of Allen and wife Soon-Yi Previn, with whom he began a relationship when she was his ex Mia Farrow’s adopted teenage daughter.

“I asked Woody Allen how he and Soon-Yi met and that was when I left… I had forgotten for a moment and so I asked them what I would ask any other couple — but as it came out of my mouth I knew that it was too late and I was like ‘oh,’” she told Lowe, adding: “He loved it.”

In 2013, Allen’s socializing with Epstein had still not cooled. Page Six ran an article titled “Woody Allen pals around with child-sex creep” featuring photos of the two walking around the Upper East Side with Previn. And, most troublingly of all, one of Epstein’s victims who filed a lawsuit against the late criminal specifically names Allen as a part of Epstein’s social circle.

“On one occasion, Jeffrey Epstein forced [Priscilla Doe] to serve hors d’oeuvres at Epstein’s private party with Woody Allen,” says the lawsuit, per the Daily Beast. “This server’s role was forced upon [her] in order to demean her, frighten her, and impress upon her the need for her to conceal the commercial sex trafficking enterprise he was running.”

“Woody was a very close friend of Epstein’s,” Doe’s lawyer Brad Edwards told Daily Beast in 2021. “They hung out quite frequently. I cannot comment beyond that.”

Dylan Farrow’s accusations have been public knowledge for decades, and only in recent years have they been treated with more gravity. HBO hopes to put the final nail in the coffin of Allen’s reputation using the available evidence that points towards his having abused his daughter, as Farrow first claimed he did when she was 7 years old. It makes a convincing argument, one bolstered by the knowledge that Allen saw no issue with Epstein’s behaviors in his own life. If Allen v. Farrow is about dismantling the apparatus that let Allen move on from this unscathed, then taking down Epstein’s inner circle seems like a great place to start.

Before you go, click here to see celebrities who have spoken out about being estranged from family.