Allon Schoener, the curator who organized the Metropolitan Museum of Art’s infamous “Harlem on My Mind” show in 1969, which caused protests that stopped traffic on Fifth Avenue because it didn’t include any paintings or sculptures by Black artists, died on April 8 in Los Angeles. He was 95.

His son, Abe Schoener, confirmed the death, at an assisted living facility.

The tumultuous legacy of “Harlem on My Mind,” the Met’s first landmark show documenting Black culture in America, has been revisited endlessly by critics and historians, but Mr. Schoener’s story is less known.

The storm over the exhibition fractured his life. Protesters picketed outside his apartment, he endured threats and intimidation, and he left New York with his family to start anew in rural Vermont. He never worked on a show for the Met again. But he harbored no ill will; he said he welcomed the discourse about diversity that the incident ushered into the art world, though he felt that the whole story had not been told.

“I think he asked that question until his dying day,” his son said. “‘How can I get my side of things told?’”

In the 1960s, Mr. Schoener was a rising star in the city’s museum scene, known for curating immersive ethnographic multimedia shows that explored New York history. Utilizing archival photography, music recordings and wall texts, the exhibitions he developed were engulfing spectacles. Such multimedia events are common today, but his approach was pioneering at the time.

In 1966, when he was assistant director of the Jewish Museum in Manhattan, a show of his there about Eastern European immigrants, “The Lower East Side: Portal to American Life (1870-1924),” was a sensation that drew lines down the block. The next year, as the visual arts director of the New York State Council on the Arts, he had another success with an exhibit celebrating the 150th anniversary of the Erie Canal, which he mounted on a barge that floated from Albany to Buffalo with folk musicians performing on its roof.

Soon enough, the Met asked Mr. Schoener if he would organize one of his signature shows there as an outside curator. 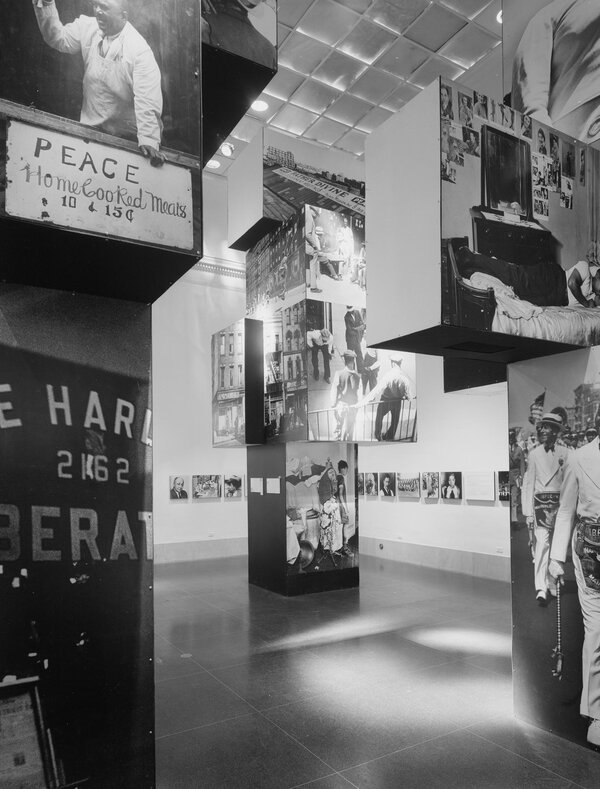 His idea was to document Harlem’s history through large-scale photographs, newspaper stories, film reels and jazz recordings. “I hate museums when they are remote from life,” he told New York magazine at the time. “This show will really grab the people, an electronic theater.”

Thomas Hoving, the Met’s director, eagerly signed off. “Harlem on My Mind” opened at the Met in 1969 with blockbuster billing, and some 70,000 people attended the show within its first nine weeks. (The critics were less impressed. In The New York Times, the conservative-minded Hilton Kramer accused Mr. Hoving of “politicalizing” the Metropolitan, while the Jamaican-born author Jervis Anderson, also in The Times, saw the show as “romanticizing” Black culture and underpinned by “white guilt.”)

Alongside the enthusiastic crowds, however, were protesters who marched holding signs that read “Harlem on Whose Mind?” They were led by a group of artists, called the Black Emergency Cultural Coalition, who were incensed that the show included no paintings by African-American artists. Joining them were New Yorkers protesting the exhibit’s catalog, which included an essay written by a 16-year-old Bronx high school student using anti-Semitic language.

The uproar reached a fever pitch.

Mayor John V. Lindsay threatened to withhold financial support from the museum if it didn’t pull the catalog from sale. Mr. Hoving issued a rare mea culpa, saying he had made an “an error in judgment.” During the episode a Rembrandt and nine other paintings were defaced with small “H’s” scratched into their canvases.

As protesters gathered outside Mr. Schoener’s Upper East Side home and clients and colleagues began distancing themselves from him, he and his wife decided to move with their children far from the city. A year later, they settled in a small town in southern Vermont called Grafton. Mr. Schoener began planting an organic garden and chopping his own wood. His children attended a four-room schoolhouse.

He went on to write three photography-based cultural history books, “The American Jewish Album,” “The Italian Americans” and “New York: An Illustrated History of the People,” and work as a consultant for clients like the Smithsonian.

Over the years, as he watched “Harlem on My Mind” become a cautionary art world tale, he always felt that several details had been omitted from the popular retelling of the incident. His main contention was that the show didn’t include paintings by Black artists because he hadn’t intended it to be a fine art show

“‘Harlem on My Mind’ was never conceived of nor presented as a traditional art museum exhibition,” Mr. Schoener wrote in an essay defending the show in 2015. He added, “It was an articulated documentary display of photography, films, recorded Harlem voices and music. For this reason, there were no paintings and sculptures, and other traditional ‘works of art’ at all.”

Addressing the “exclusion of Black painting, prints and sculptures,” he noted that the show celebrated Black photographers, Gordon Parks among them, and that the work of the Harlem photographer, James Van Der Zee was discovered during the research for it.

But he concluded, “Although well-intentioned, both the Met staff and I were inexperienced and naïve in dealing with the African-American community.”

As to the student’s catalog essay, he had published it to put the voice of a young Black New Yorker in the show, he said in a 2007 interview with the San Francisco Museum of Modern Art, but acknowledged his lapses in the editing.

In 1995, when the Met published a new edition of the “Harlem on My Mind” catalog, Mr. Schoener was heartened to discover that the show was being reconsidered. The Schomburg Center for Research in Black Culture in Harlem organized an event commemorating its release, and the historian Henry Louis Gates Jr. wrote in the introduction that the catalog “remains, even a quarter century later, one of the richest and most comprehensive records of the history of the African-American in the twentieth century.”

The reissue prompted Michael Kimmelman of The Times to reflect on the show, writing: “The pity is that ‘Harlem on My Mind,’ as you can glean from the reprinted catalog, had its strengths. It was a celebratory exhibition at heart.”

Allon Theodore Schoener was born on Jan. 1, 1926, in Cleveland. His father, Harry Schoener, ran a trouser factory. His mother, Ida (Finkelstein) Schoener, was a homemaker. Both his maternal and paternal grandparents arrived at Ellis Island from Lithuania and settled on the Lower East Side.

In 1946, Allon studied art history at Yale and then attended the Courtauld Institute of Art in London before returning to Yale for his master’s degree in 1949. He went on to became a curator for the San Francisco Museum of Art and, in 1955, director of the Cincinnati Contemporary Arts Center. He married Mary Heimsath a year later. Mr. Schoener moved to New York in the 1960s to join the Jewish Museum and the New York State Council on the Arts.

In addition to his son, he is survived by a daughter, Rebecca.

Mr. Schoener retired to Los Angeles in 2010. Fiercely political, he was attuned to the roiling conversation about race in America, and he watched as controversies not unlike the one he faced in 1969 started engulfing museums with regularity.

Last year, the Whitney Museum of American Art in New York canceled a show after artists of color objected to the museum’s obtaining their work through discounted sales, intended to benefit racial justice charities, without compensating them. And the American Museum of Natural History agreed to remove a statue of Theodore Roosevelt — in which he is portrayed astride a horse flanked by a Native American and an African man — from outside its entrance in response to protests condemning it as a colonialist symbol.

Mr. Schoener heard such incidents deridingly referred to as examples of “cancel culture.” He found that term reductive and simplistic.

“He was intensely aware of topics in the news like ‘cancel culture,’” his son, Abe Schoener, said. “And he shrugged at it. He thought lots of it was progress. To him it was like, ‘Yeah, well, that’s the price to pay for change.’”