Maria Garcia has a distinct memory of when her connection to Selena Quintanilla-Pėrez began. It was the early 1990s and she was 7, watching the Tejano star perform on television.

“She had this cascade of black hair, red lips, brown skin,” Garcia says in the first episode of the new podcast “Anything for Selena.” “She sang like she felt every single word of her songs, like the music was emanating from her body.”

It was a pivotal moment for Garcia, the podcast’s host. Born in Ciudad Juárez, Mexico, and raised in El Paso, Texas, she struggled to figure out who she was and where she belonged, describing in the podcast how she felt “a rejection, a stigma, in both countries.” Yet, here was someone who looked like her, uncompromising in her biculturalism and appearance. Selena was Mexican as much as she was American. Her first hits, like “Como La Flor,” were in Spanish, but “Dreaming of You,” her posthumous English-language album, was a mainstream success and the 1997 biopic starring Jennifer Lopez further cemented her legacy.

While the show, a 10-episode podcast co-produced by Boston’s NPR affiliate WBUR and Futuro Media, serves as a biography of Selena, it also weaves in Garcia’s personal story. And she makes the case for how the singer’s life and death (Selena was fatally shot by the president of her fan club in 1995) were profound flash points for Latinos like herself that had lasting effects on the cultural landscape. The episodes drop each Wednesday and are paired with Spanish-language versions. 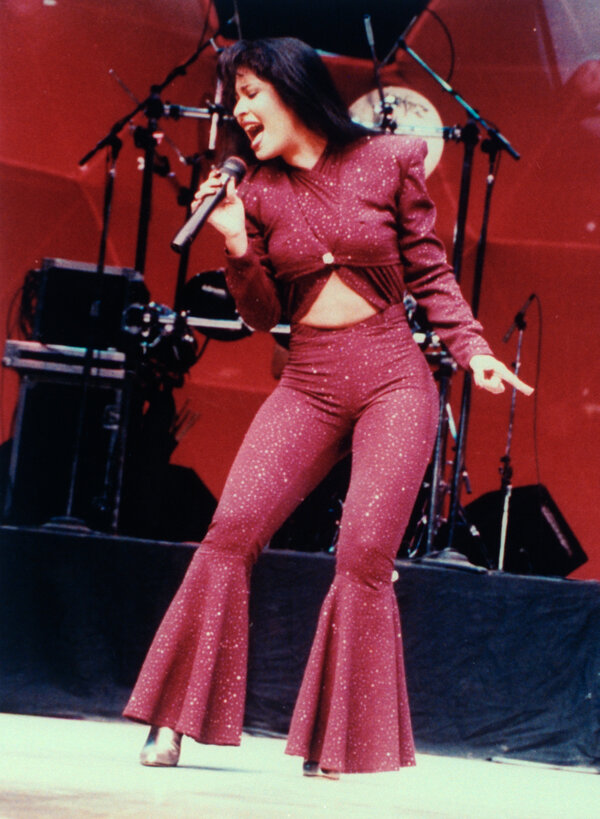 I also grew up in Texas, 100 miles north of Corpus Christi, where Selena was from, and like Garcia, I am a first-generation Mexican-American. Whether it was at a quinceañera or blaring from the kitchen radio, Selena’s music was part of the soundtrack to life. Tejano music, which fuses Mexican, European and American influences, was an expression of what it means to be from Texas. She embodied all those influences.

Garcia is currently staying in El Paso, where she spoke on the phone about the series and how much it hinged on a meeting with Selena’s father, Abraham Quintanilla, who is known to be very protective of her legacy. These are edited excerpts from the conversation.

What was the inspiration for “Anything for Selena?”

The last home video I have with my father before he died, it’s of us dancing to Selena music. I realized there were all these moments in my life where Selena was there, and I really wanted to unpack why she felt so profound to me even in my 30s. I knew the answer was more than just she was this Mexican-American performer in the ’90s — a time when that really incentivized assimilation. I wanted to go even deeper and try to connect the dots through the decades and really try to do her legacy justice in music and in culture.

The other thing about this series is that it’s partly a memoir about your upbringing and life on the border and struggling to fit in. It made me think of this saying in Spanish, “ni de aquí, ni de allá,” neither from here nor there. Why did you want to open up about that?

I wasn’t thinking of it as a memoir when I started writing it. For me, I was telling this story because when I was 7 years old and I have the first memory of Selena, I didn’t have the language to articulate what she meant to me.

There was this tension between these two parts of me, and to see somebody who embodied both of those parts fully in the States and in Mexico, who traversed the two countries without code switching, who was the same person on both sides of the border — I’d never seen anything like that. It struck me at a young age and it stayed with me all of my life.

The most recent episode has topics that listeners may find intriguing.

We explore race pretty deeply in these next episodes. I have this theory that there is a direct historical lineage from Selena to today’s mainstreaming of big butts. Black women have always been at the forefront of celebrating curvaceous bodies, but there is this moment in the mid-90s, after Selena’s death, and particularly at the time of her biopic, whenLatinas, made it a feature that became desirable in the mainstream.

To me, that story is about Latino identity’s fraught relationship with Blackness and the way Latinidad (the concept of U.S. Latino identity) has dehumanized and erased Black people while capitalizing on and obsessing over Black features. And the way that Latino identity has served to make these features palatable for white audiences.

In the second episode, you talk about going to meet Abraham Quintanilla, Selena’s father. What was that experience like and did you have concerns about what might happen?

Oh absolutely. I was terrified. I flew to Corpus Christi without any guarantee that he would even see me. We had been trying to acquire the music rights for Selena’s catalog. We had heard from the record label and they told us that not only the family rejected it, but that they were not supportive of the project.

But I knew Abraham was one of the foundational keys to understanding Selena. It’s amazing how often and how devotedly she talked about her father. They had a creative bond over their craft, over music.

He’s this really imposing character, especially in Spanish media. There’s been so much salacious coverage about him, and I wanted to get to know him as a person, without an agenda. I think he realized that after he spent some time with us and opened up.

It felt like he let his guard down with you.

And I with him. It was reciprocal.

He is genuinely a complicated person. He admits that he was an incredibly demanding father. But he told me he has moments where he wonders if he had not pushed Selena to be a star, would she still be here? That’s a very real tension he has lived with for the last quarter century.

The series also discusses how after Selena’s death, Howard Stern became a flash point on how Latinos were portrayed in the media. It was startling to hear the rhetoric now (In a clip, he makes fun of her and the Latinos grieving her death; he later apologized). Do you think much has changed since then?

A lot of people listen to that archive tape and feel distressed. I say this in the episode — this is his thing. But I really wanted to focus an episode on that because that is the moment in the Selena journey that it became clear to me how political [her death] was. To make fun of the people who mourned her was to dismiss the life of Latinos.

When I heard this tape, all I could think about were the women in Juarez who have been murdered over generations and nobody cared. And it feels like to this day, nobody cares. So many of them looked like Selena. These are women who were poor and brown like Selena had been. But Selena was afforded a different path because she was born on this side of the border.

Even if she did everything right, even if she played by all the rules, still to Howard Stern, her life didn’t matter. That’s the moment where her symbolism took off, the weekend after her death. After her death, her symbol then transformed even more. She became this vessel to look at the polemics, tensions and narratives around Latino life and its worth.